It’s not every day that a student gets to return to his or her alma mater, to walk the halls as not only an alumnus, but also a teacher. ICE Culinary Arts graduate Charles Granquist has more than earned his place among our faculty, with a resume that includes such diverse experience as the fine-dining kitchens of Blue Hill and the fast-paced food media world of the Food Network. 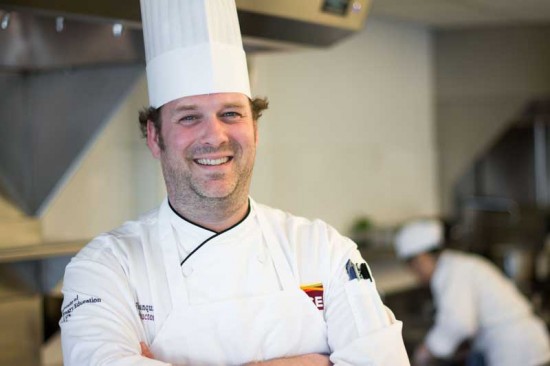 When he first arrived in New York, Charles wasn’t the most obvious candidate for the culinary profession. He didn’t grow up in a family of cooks, and his education in music and economics at Bates College hadn’t prepared him for life in the kitchen. But when his first job at a sound branding company didn’t pan out as planned, the thought of escaping the cubicle for the kitchen began to sound increasingly enticing.

“If there was anyone in my family who sparked my interest in food, it was probably my grandfather,” Charles explained. “He was originally from Bogota, Columbia, but he spent a significant part of his life in Paris. He couldn’t cook at all, but he would regale us with stories of meals he had in France or Gstaad.”

Those stories, paired with a few summer jobs at fish markets and grills during his college years marinated in Charles’ mind, forming the foundations of a professional calling. His curiosity sparked, Charles knocked on the door of Chanterelle — then, one of the most innovative fine dining restaurants in NYC.

Offering his services for free got his foot in the door, and within the first few days in the kitchen Charles was certain cooking was the career for him. From there, he moved on to the Savoy, where he was hired as garde manger. But the longer he spent in professional kitchens, the more Charles realized he would benefit from formal schooling. 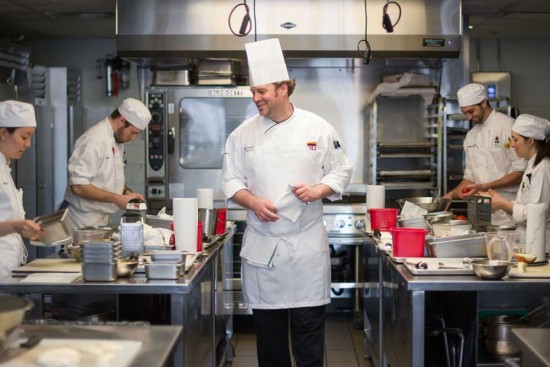 So in 2002, Charles enrolled in the morning Culinary Arts program at ICE, while continuing night shifts at Savoy and Fleur de Sel. Immediately, he found a mentor in Chef Ted Siegel. Charles explains, “I don’t think I would have gotten very far in the industry if it weren’t for him. He was tough on all of us and actually got us ready for a restaurant. Specifically, having him for the fifth and final module of the program…that really made me feel ready to enter the industry.”

For his externship, Charles chose to work under an equally rigorous chef, Dan Barber, at Blue Hill in Greenwich Village. He arrived at the restaurant at a fortuitous time: right before Barber opened Blue Hill at Stone Barns in Pocantico Hills, New York.

“It was amazing because we closed down Blue Hill NYC for a few months, and the entire crew went upstate to help with the opening. We knew we were on the cutting edge of something, and getting to work with Dan Barber and other chefs like Mike Anthony (now the executive chef of Gramercy Tavern) and Juan Cuevas was an incredible learning experience.”

At the time, Blue Hill was still in its infancy, but Barber’s mission and vision shaped the way Chef Charles cooks to this day. “Chef Dan was a very cerebral guy. He was tough and demanding, but he also made you think really carefully about what you’re doing and where your food is coming from.

My cooking style remains hyper-seasonal to this day — even in my home kitchen. My wife might think it’s ridiculous, but I genuinely like to work with what’s in season because it tastes the best and because working with restrictions is the best way to challenge yourself.”

After the opening of Stone Barns, Chef Charles returned to Blue Hill NYC for another two years. As he moved his way through various stations — from garde manger to saucier — the restaurant continued to evolve, eventually earning a rave three-star review from The New York Times.

Working at one of New York’s finest restaurants didn’t offer much flexibility, so at the request of his newlywed bride, Charles began investigating kitchen positions with more normal hours. Dan Barber personally helped Charles in his search, putting in a call to the Food Network, where Charles landed a position as a food stylist. “Working as a food stylist at the Food Network is totally different than in other parts of the industry. If you’re styling a turkey for Emeril, you might prepare a turkey in six different stages of the cooking and plating process. Every detail needs to be carefully planned out in advance,” Charles notes. 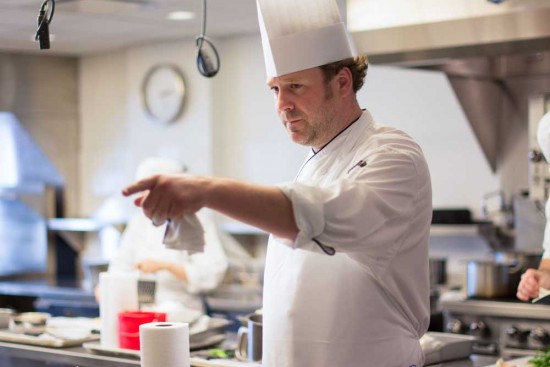 After about a year and a half, Charles was promoted to culinary producer, which involved cross testing the talents’ recipes, developing a run of show for every shoot and working with the talent to ensure everything ran smoothly on set. Working in food media did leave Charles missing the heat and camaraderie of the kitchen, so when the chance to work on new business opportunities for the network arose, he jumped at the opportunity.

Working with the Delaware North company, Charles’ role was to build out a flagship Food Network concession stand at Yankee Stadium. After three years, the project was such a success that it expanded to 22 stadiums across the country. “Working in large-scale food service was something I had never done before,” explains Chef Charles, “so there was a learning curve — in terms of what people would want to eat, how to do local or sustainable sourcing in a stadium setting, etc.” Charles was also recruited to develop two Food Network restaurant concepts for the Fort Lauderdale and Atlanta airports — each with an open kitchen and a menu that reflected local culinary flavor.

After years at Food Network, something was still missing for Chef Charles. He took a year off to follow his passion—spending a week in Chef Mike Anthony’s kitchen at Gramercy Tavern, training in charcuterie at Artisan Meat Share in Charleston and eventually, taking a job at Dickson’s Farmstand Meats as an apprentice charcutier and in-house chef for the shop’s prepared foods.

“After a year back in real kitchens, I knew that I wanted to continue in a place where I was cooking actively,” says Charles. “I had always liked training the staff at the restaurants I had opened for Food Network, so when I saw an opportunity to teach at ICE, I knew that would be a meaningful next move.” Though only in his first weeks of teaching, Chef Charles is already shaping the career paths of the next generation of chefs.

Initially, a lot of students are interested in my work with the Food Network, but even if food media is your professional dream job, it would be a major mistake to leave culinary school and not spend at least one year in a professional kitchen — the very best kitchen you can find. No matter where you go after that, you are going to need that foundation. At Food Network, the people who rose through the ranks quickest were invariably those with restaurant experience. And yes, that first year might be the most terrifying career choice of your life, but you will be a much better candidate for any job after that.