Whether we train with them daily in our teaching kitchens or simply enjoy the fruit of their creative labor, it's safe to say we're all fans of our in-house Chef-Instructors. But what do we really know about these culinary champions and their experiences before ICE? "Meet the Chefs" is an effort to discover the stories of the experts who keep our education on the cutting edge.

Known to his colleagues as “the Encyclopedia”, Ted Siegel’s 40-plus years in the food industry have included stints in renowned New York institutions, two- and three-star Michelin properties and such famed American restaurants as Chez Panisse. His persistence, love of cooking and baking, and his hunger for learning have made him an exceptional chef and culinary educator. 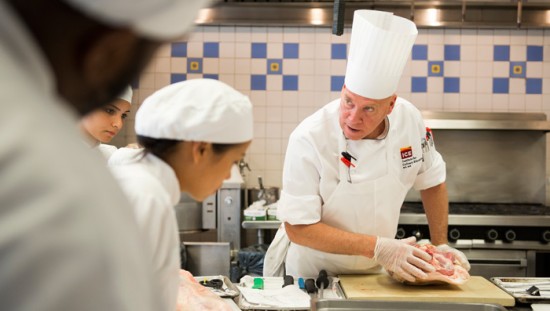 Born to a Polish/Russian father and a mother with Austrian and Spanish roots, culinary diversity is in Siegel’s blood, a quality that was only reinforced by his childhood on New York’s Lower East Side. His own family boasted a number of great cooks, most notably his father, uncle, and grandmother.

As for his first food memory, Siegel recalls walking into New York institution Russ and Daughters, reveling in the sights and smells of their smoked and cured fish, salads, and prepared appetizers.

The allure of food led to his first job in the industry at 15, as a delivery boy at Dover Delicatessen.  (Though allure might be too strong of a word – he hated the job.) What he really wanted to do was hang out in the deli’s kitchen. Still, it was a welcome diversion from high school; he hated that too. What the young Siegel really wanted was to spend his time on either food or hockey. Having played hockey since age six, becoming a pro goalie was his only career aspiration aside from cooking.

After high school, Siegel went to college at a small school in New Hampshire, selected mostly for its vicinity to Canadian hockey. He worked in a kitchen part-time as he studied political science and economics, but after three years, he decided to move on from traditional education. Food was becoming the priority. 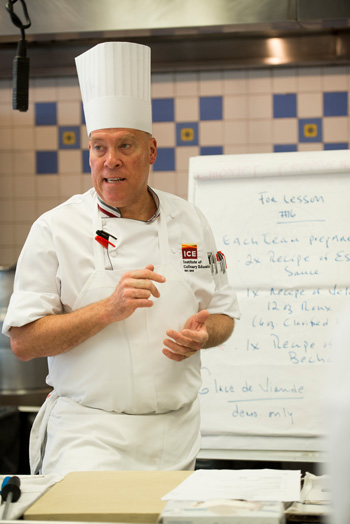 After a turn living in the barbecue mecca of Memphis, TN, where he learned the region’s signature techniques for grilling and smoking various meats, he returned to NYC for his first position as a line cook at Serendipity. Three years under the mentorship of owner Calvin Holt introduced him to the grind and pace of serious cooking on the line.

“I was cooking French omelets in one hand while mixing hot chocolate in the other.  I made lots of mistakes – but they kept me for my persistence.  It’s where I first learned my skills.”

At his next position on the line at Elephant & Castle, he was given a copy of “The Saucier’s Apprentice,” the famed Raymond Sokolov title on sauces. He cooked his way cover to cover, fostering a deep love of sauces and French technique, which continued on to his next positions at Terrace in the Sky and The Box Tree.

After ten years experience in kitchens, school seemed to call again, with culinary arts being a better choice than poli-sci.  He graduated from the CIA in 1982, externing in Houston, TX at the Meridian Hotel, under the guidance of classically trained chef José Gutierrez.

By the time he graduated, he had twelve offers waiting for him around the country, including one at the New Orleans landmark Commander’s Palace. He would have been working under then-rising chef Emeril Lagasse, but turned it down, opting for the local, sustainable kitchen of the famous Alice Waters at Chez Panisse in San Francisco.

Three years at Chez Panisse led him to his first role as Chef, at the Grant House in San Pedro, CA.  Building from his experience in the kitchen of Alice Waters, the menu of entirely house-made elements got him rave reviews, including one from Gourmet magazine.

Yet the Los Angeles culture didn’t agree with Siegel. The next five years took him through different positions back in the Bay Area and throughout Europe, including spots in two and three Michelin star-rated establishments.

Over the course of his career, Seigel’s expertise prompted favorable reviews in Gourmet Magazine, the Los Angeles Times, California Magazine, Gault & Millau Guide, The New York Times, Zagat’s Restaurant Survey, Time Out Magazine, and The Village Voice. In 2001, Siegel decided to bring his experience to the teaching kitchens at ICE.

Siegel advises all students to travel the world and learn about food beyond the school environment, but he believes in the unique value of culinary school for those serious about the industry.

“Prior experience in kitchens will enhance the value of culinary school, but a culinary education compensates for the knowledge you can’t get on the job. It enables you to start your career at a higher level.”

As proud as we are to have Ted Siegel as Chef-Instructor for our Culinary Arts program, the most important reviews come from his students. When asked about their favorite parts of their ICE education, our graduates have often responded “Chef Ted of course.”