While the Black Lives Matter movement continues to gain overdue momentum, movements within the movement have also emerged. Black Voices Matter and Black Stories Matter became rallying cries to change the face of bestseller lists, adjusting literary columns to more accurately reflect the diversity of the American population. Among that, I would add, Black Culinary Stories Matter and are ever more important to read and consider for a complete culinary education.

The idea of American cuisine is inseparable from Black culinary culture, as some of our most well-defined, most celebrated regional traditions are rooted in the African diaspora. High-visibility black chefs such as Marcus Samuelsson and Carla Hall have helped bring attention to black culinary narratives, but their stories are just a fraction of many important ones that also deserve such visibility. To that end, we’ve rounded up 10 books — cookbooks, memoirs and anthologies — to advance a further understanding of the importance of Black chef contributions to the American culinary landscape. 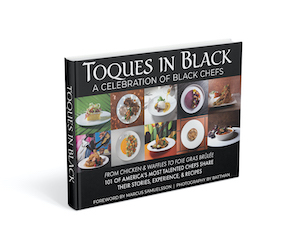 Toques in Black: A Celebration of Black Chefs

"Toques in Black" is the greatest single representation of the influence of Black chefs in contemporary American cuisine, from picnic tables to white tablecloths. The book is a vibrant collection of 101 personal stories of culinary journeys and the long odds black chefs had to face to become leaders in their field. With a foreword by Marcus Samuelsson and photographs by Battman, ICE alumni Adrienne Cheatham (Culinary, '07) and Michael Jenkins (Culinary/Management, '06) contributed, along with Culinary Arts Chef-Instructor Michael Garrett.

Toni is a legend in culinary publishing, not only for her many accolades and storytelling capabilities but by answering the important question: who do you think was doing all of the cooking in early American haute cuisine? Aptly titled, "Jubilee" not only outlines but celebrates the roots of African American cooking. Other titles by Toni include "A Taste of Heritage: The New African American Cuisine" and "The Jemima Code: Two Centuries of African American Cookbooks."

Cooked​: My Journey from the Streets to the Stove by Jeff Henderson

Now a renowned chef and in-demand public speaker, Jeff learned to cook, and more importantly, learned to love it, while spending nearly a decade in prison. His story of the hustle from crack cocaine dealing in South Central LA to the bustle of some of the top restaurants of Las Vegas, is one of redemption by fire and of an adrenaline-fueled life on either end. 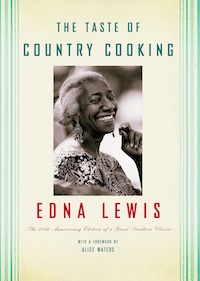 The Taste of Country Cooking by Edna Lewis

Edna, the granddaughter of an emancipated slave, is considered the godmother of Southern American cuisine, bringing recipes and techniques from her native Virginia to New York City. At her Manhattan restaurant, Café Nicholson, she was revered for her approach to seasonal Southern cooking and caught the attention of Judith Jones, publisher for none other than Julia Child, who helped Edna bring "The Taste of Country Cooking" to life.

High on the Hog: A Culinary Journey from Africa to America by Jessica B. Harris

Including a foreword by literary luminary Maya Angelou, Jessica’s "High on the Hog" is definitely a cookbook in that it contains recipes. The majority of the text, however, is dedicated to the backstory of each of the 20 selected dishes. A prolific author, culinary figure and scholar, Jessica weaves an engaging narrative about the way food travels with people and how it creates not only comfort but influence. 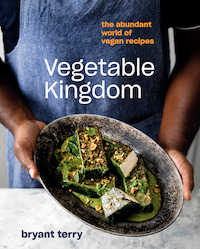 A graduate of Natural Gourmet Institute (now the Natural Gourmet Center at ICE), Bryant’s is an essential Black voice in the world of health-supportive, plant-based cuisine and food justice. His recipes focus on whole foods — vegetables, grains and legumes — and creating global cuisine rooted in the vibrant flavors of African and Asian culinary traditions. Also by Bryant: "Afro-Vegan: Farm Fresh African, Caribbean, and Southern Flavors Remixed."

An easy lesson in culinary math: "Black Girl Baking" plus Black Girl Magic equals Baking Magic. Jerrelle’s decadent baking guide is literally sensual: Chapters are organized by sight, aroma, sound, touch and taste, bringing a healthy dose of intuition and attention to the science of baking. The sight chapter, for example, showcases recipes with “shapes, colors and patterns,” and the sound chapter highlights those that provide “snap, crunch and music.” 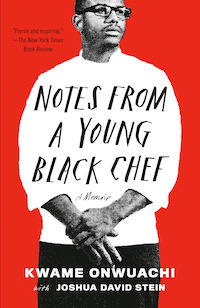 Notes from a Young Black Chef by Kwame Onwuachi

Kwame’s stunning memoir provides an African American response to "Kitchen Confidential," highlighting the particular challenges that an ambitious chef of color faced even while opening five restaurants before the age of 30. With testimonials from every major food media outlet to Questlove, Kwame’s perspective is a necessary one in a complete understanding of restaurant culture, amplifying Black voices in restaurant kitchens.

The Cooking Gene: A Journey Through African American Culinary History in the Old South by Michael W. Twitty

Acclaimed as one of the best bloggers of all time, Michael’s blog, Afroculinaria, helped establish his influence for being the first whose material focused on African American historic foodways and their ongoing legacy. In his provocative memoir, he traces his own culinary heritage back through the decades and centuries, highlighting the politicization of soul food in America.

Sweet Home Café is a museum restaurant in the National Museum of African American History and Culture, in the larger scope of the Smithsonian. As such, it functions almost as an interactive exhibit, highlighting traditional dishes made with locally sourced ingredients and contemporary techniques. The cookbook not only provides recipes for café favorites but illustrates the role that African American cooks and traditions have played in establishing an American culinary point of view.

The Culinary Traditions of Kwanzaa