In our increasingly global food scene—where we can access ingredients as diverse as octopus, chicory and passionfruit; where our shelves are lined with cookbooks celebrating Italian, Filipino, Middle Eastern or South American cuisine—what is the value of regional cooking? It's a question that ICE Culinary Arts alum Vivian Howard and an evolving community of chefs are exploring by revisiting the flavors of their ancestors, celebrating the ingredients and dishes of regional American cuisine.

Acclaimed for both her work as chef/co-owner of Chef & The Farmer and her acclaimed PBS show A Chef's Life, Vivian was presented with a Peabody Award in 2014 and has been nominated twice for the James Beard "Best Chef Southeast" award. But beyond these honors, Vivian's cooking and storytelling are breathing new life into the culinary traditions of eastern North Carolina, inspiring a new generation of chefs to explore their own roots and celebrate the taste of home.

Before I started cooking, I worked in advertising as an executive on the Pantene account. But I knew that I didn’t want to do that forever, so I quit my job. As I was trying to find myself, I started working in restaurants, and the first real place I worked was as a server at Voyage, which did southern food via the African diaspora.

I became very interested in the stories behind the food, so I started working in the kitchen as a means to become a food writer. I didn’t intend to become a chef, but I found that I enjoyed the camaraderie, the fast pace, the deadlines and the message of it all. The chef I was working for recommended that I enroll in a culinary program, so that I could get an internship in the city’s top kitchens. 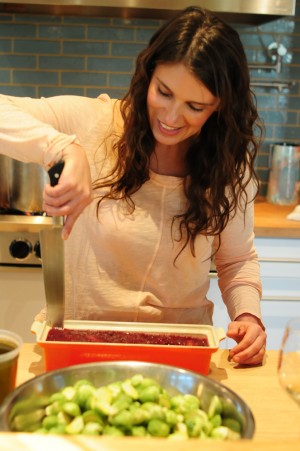 What were the highlights of your time in culinary school?

I liked ICE’s approach, and I felt it was a well-rounded program that would help me discover what direction I wanted to follow. My first instructor was Alex Guarnaschelli, who was such a great storyteller, a passionate teacher and—of course—a female chef. She really set the bar for my experience.

I also remember Chef Ted; he was very intimidating, but turned out to be one of my favorites—so knowledgeable, very open and just knew everything. All my teachers were great. I never popped up so easily in the morning as when I was in culinary school.

Where was your externship, and how did it influence your future in the industry?

My externship was at wd-50. It was just about to open at the time, and the New York Times did a big spread on the restaurant. I remember reading about the avant-garde techniques, and thinking, “I want to do that.” It was a kitchen of super intense males at the top of their game, but they were open to [me externing].

The first day, I was terrified. It was overwhelming for a young woman from North Carolina—I was still working on my knife skills! But I had a great experience and became more comfortable.

I remember working in pastry, making a parsnip cake that Chef Sam Mason was so well-known for at the time. He did a lot of vegetable-based desserts, which I found very interesting and that I’ve carried with me over the years.

I also remember working on a squid noodle dish where we froze the squid and then sliced it into long strips. It was one of the first times I really witnessed reinvention or a sort of culinary “trickery” on the plate.

What came next for you after wd-50?

From there I went on to join the opening team at Spice Market, and I stayed there for 8-10 months. I enjoyed the super fast-paced environment, with a ton of covers and Jean Georges himself on board—a great learning experience.

But I began to think I might like catering, so I started working in that field after Spice Market and had a little non-legitimate catering business that I was running out of my apartment. Around that time, I had some folks interested in investing in a soup shop in the city, but when my parents heard that I was really thinking of putting down roots in New York, they said, “Oh no, come back to North Carolina and we’ll help you open up a restaurant here.”

So I moved back to eastern North Carolina and began renovating a building and starting over from scratch. It took just over a year to actually open, and since I was just a line cook in New York City, I had no real experience running a kitchen. I was still trying to find my voice.

But as I learned more about this place where I grew up and the food that I ate during my childhood, I came to love and respect that food. So I slowly started reinventing traditional dishes from our region of North Carolina, and we got a great response from our neighbors and the community.

How did running a regionally-focused restaurant evolve to the point where you were producing A Chef’s Life?

Four years ago, I had some neighbors who invited me over to make collard kraut. Here I am with four sixty-year-old men, using the same seeds that have been passed down for generations. They explained to me the traditions—including specific rules like the fact that women never made the kraut—as well as certain beliefs based on the farmers’ almanac. I found this so interesting, and I wrote a little blog post about it.

But my interest in these kind of traditional, regional stories really started to grow, and I started talking about filming and sharing them with other people. Finally, my husband said, “Please go talk to someone else about it.” So I reached out to a childhood friend, Cynthia Hill, to ask if she’d be willing to help out with the project. We started experimenting with what I was like on camera, and finally we came up with a pilot around the subject of sweet corn.

At that point, Cynthia had some contacts in New York and at University of North Carolina TV, but everyone said no. They didn’t understand what to do with it—was it a cooking show or was it a documentary? But we felt strongly that it was special, so we brought it to South Carolina TV, and they loved it and wanted to take it national to PBS. But for that to happen, we had to make 12 more episodes to create a series. We raised the money locally through economic development groups and a Kickstarter campaign, scraping together just enough to make that first season.

You’ve won a number of awards—notably James Beard Foundation and a Peabody awards—for the series. Are there any particular milestones or accomplishments of which you feel most proud?

I used to be very milestone-oriented. “Oh, if I can get a review by this newspaper or if I can get nominated for this award.” Or, “Oh, if we can just make this first season.” But at this point, I’ve decided that I’m not going to focus on those things and just try and enjoy the journey. Because with every positive milestone comes challenges, too.

I don’t know if this would surprise people, but my day-to-day routine has changed a lot. A year ago, I would have been in my kitchen starting at 9am, prepping for service, expediting and then going home for the night. Instead, I’m in a car with two friends, heading to a bluegrass festival to shake hands and sign autographs.

Clearly that’s not every day, but my role in my restaurant is changing as a result—even though, when I get off the phone with you, I’m going to write out the mise en place sheets for some new dishes I’ve developed. I’m still trying to run a restaurant kitchen, so there’s a lot of juggling that goes on [between my two careers].

What do you hope the future holds for you, for A Chef’s Life, and for the restaurant?

I would like to see what we’re doing in our community make the community a stronger place—with more economic opportunities, more young people, etc. I want our restaurant and our series to help make eastern North Carolina a place that folks want to travel to and spend time in. On a personal note, I also want to find balance in my life, where I can feel like I’m doing right by my restaurant staff and that I’m doing my best as a mother and a wife. I have no interest in developing a restaurant chain; I want to impact and support those people who are close by.

I believe in cooking food that has a story behind it and integrity to it—food with a very specific sense of place and that people want to eat.

Click here to read about other ICE alumni pursuing careers in the field of food media.