ICE offers a year-round series of lectures called Meet the Culinary Entrepreneurs, during which a wide range of successful culinary business leaders and luminaries share their expertise with students and guests. Yesterday, Tito Beveridge, the founder and master distiller of Tito’s Handmade Vodka came to speak about his experience founding the first legal distillery in Texas and making a vodka so good it earned a Unanimous Judge’s Decision Double Gold Medal in the 2001 Worlds Spirit Competition.

Tito’s produces world-class vodka at a reasonable price, but Beveridge was not always in the beverage business. Named after his grandfather, Tito was born Bert Butler Beveridge III, but everyone called him Bertito or Tito. His grandfather’s advice was always, “Do something you love for a living, and the worst that’ll happen is you’ve spent your time doing something you loved.”

But Beveridge did not heed that advice. Instead he worked as a roughneck on an oilrig, majored in geophysics, mowed lawns, delivered cheeseburgers, was a seismic data processor, headed a seismic dynamite crew in Venezuela, lead a drilling team in Texas, did some environmental engineering and was a mortgage banker before he ever thought about getting into the beverage industry.

One night, he came home from a party and saw a TV program advising making a list of the things you love to do and the things that you are good at to come up with your dream job. “Given that I was a little buzzed, my list of things I liked included girls, bars, partying and restaurants. I was good at science, fixing things and engineering.” At the same time, Beveridge was making gifts for friends by flavoring vodkas with chilies or fruits. When a stranger complimented his vodkas and told him he should sell them, it clicked and Beveridge decided to get into the vodka business. 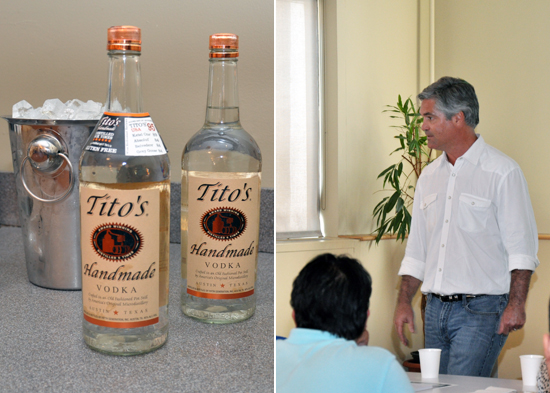 Originally he wanted to sell flavored vodkas, but a liquor store owner advised him to make a “vodka so smooth a girl will drink it straight and a guy will buy it for her.” Beveridge put his engineering experience to work and learned how to distill vodka through trial and error. He worked on different recipes, giving blind taste tests until he found a formulation for a vodka his friends picked as their favorite every time.

As he bumbled along figuring out how to make high quality vodka, he also was figuring out the business and legal end of owning a spirit distillery. In the first years, he would wait by the mailbox until a check came, cash it, buy supplies, make a batch of vodka in his one-man, one-room distillery and head out on the road to sell it. It took seven years until Beveridge was able to break even. He joked that he started his business using, “the scrappy Joe method.” After the audience tasted the vodka, Beveridge explained, “This is a lot more fun than all my other jobs, and I want my friends to be able to afford it.” He added, “I make vodka I like to drink. It’s a labor of love, so I want to enjoy it at the end of the day.”