3 stars in the New York Times. Sous Chef to Thomas Keller. ICE Chef Instructor. From the Beatles to Lucille Ball, Charlie Chaplin to Oprah Winfrey—some of the greatest success stories come from unlikely candidates who were told they would never “make it.” But if ICE instructor Chef Chris Gesualdi was once an underdog, you’d never know it today. 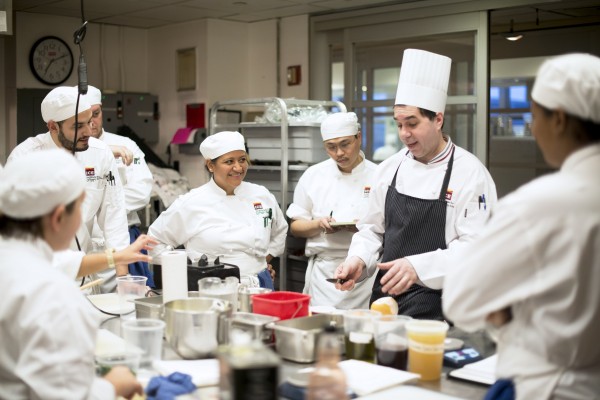 Growing up in Connecticut, Chris’ first encounter with the culinary industry was as a dishwasher—a job he picked up to help pay for his motorcycles. But when the chefs were absent, Chris had to fill in, so by the time he finished high school he had already worked as a cook in two restaurants.

As part of his culinary education at the CIA—where he studied alongside fellow ICE chef instructors Ted Siegel and Mike Handel—Chris externed at several sites. At the first restaurant, the chef told Chris he would “never make it,” a pivotal moment that only motivated the young chef to work even harder. It was during this period of externships that Chris learned his work ethic (notably, his ability to truly enjoy working 80-hour weeks) made him distinct from other cooks.

Even today, as a chef instructor, Chris balks at the idea of taking long vacations. He’s happiest at the stove—and when he’s not teaching at ICE, he’s typically trailing, doing stages at such acclaimed restaurants as Per Se, wd~50 or Blue Hill. “Nowhere in my life am I comfortable,” he says, “This is what I do for a living—I learn.” 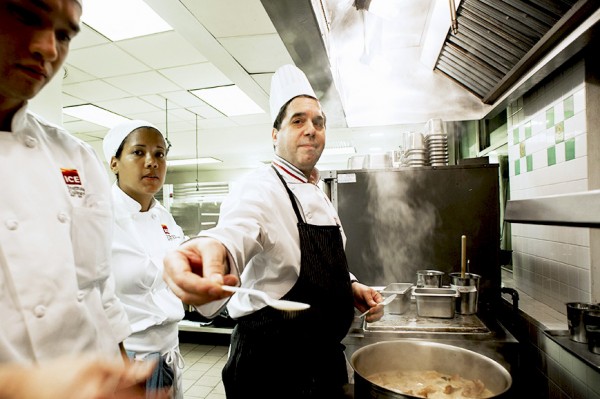 After graduating from school, Chris soon landed in New York, working his way into the kitchen of one of the country’s most buzzed about restaurants: La Reserve. Thomas Keller was at the helm of the kitchen, and Chris volunteered to work for free (while sustaining another full-time kitchen job) until Keller gave him a paid post.

For the next seven years, Chris was Keller’s “right hand man” and sous chef, from La Reserve to Rakel and Restaurant Raphael. At times, those back of the house teams were just the two chefs and a dishwasher. When Keller moved west to open the now-renowned French Laundry, Chris had a standing offer. But he knew he wanted to strike out on his own.

"The years I worked at La Reserve, Raphael's and Rakel were some of the most formidable of my career and Chris was there every day. His commitment, dedication and work ethic were unmatched and continue to be an example today. I am blessed to be able to call him a colleague and friend, and our profession is in a better place because of chefs like Chris who truly understand what it takes to be a chef.” - Thomas Keller

The pinnacle of Chris’ ambitious career came at Montrachet, where he started as sous chef and was made Chef de Cuisine within a mere six months. Eventually named Executive Chef of the restaurant, Chris collaborated with legendary restaurateur Drew Nieporent, earning a 3-star New York Times review from Ruth Reichl—noted as one of the “best reviews” the writer ever penned.

At a time when Tribeca had zero restaurant scene, Montrachet was one of the city’s first great downtown restaurants, serving fine-dining fare in a relaxed bistro setting. From the Daily News to the Observer to Zagat, Chris received the highest marks. In GQ magazine, his truffle-crusted salmon was named one of the “10 best dishes in the US”. 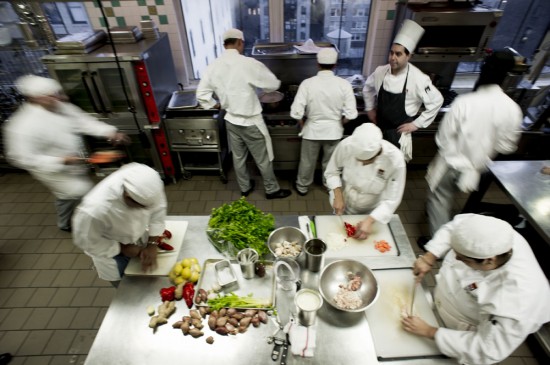 Yet unlike many chefs of his generation, Chris wasn’t looking for the fame and the spotlight of the media. He says the kitchen is his escape from the pressures of life, where cooking in and of itself is the reward. In our age of celebrity chefs, Chris’ perspective is remarkable, an uncompromising dedication to cooking.

And it’s that very passion that has transformed a man who has Thomas Keller and Drew Nieporent on speed dial into one of ICE’s most beloved and respected chef instructors. In Chef Chris’ kitchen, things run with the smooth efficiency of a traditional French brigade system, but discipline alone can’t turn a hodge-podge team of future chefs into a well-oiled machine. Chris takes his students’ performance personally, and it’s that level of investment in each individual that transforms eager students into professional cooks.

It’s hard to imagine a chef more inspiring or a teacher better suited to our diverse community of students. His famous tagline—“make it beautiful”—doesn’t just apply to the final plate. Every task—from washing dishes to crafting a sauce—has equal value. You don’t just learn technical skills in Chris’ class; you learn to respect yourself as a cook.