Before she attended ICE’s Culinary Arts and Culinary Management programs, alum Denisse Oller was already a media powerhouse, working as a news anchor for networks like Telemundo and Univision. Combining her newfound culinary talents and television skillset, Oller has since appeared on Throwdown with Bobby Flay, The Today Show, Martha Stewart’s radio show and even a national campaign for “MiPlato” (MyPlate) initiated by First Lady Michelle Obama. We spoke with the media mogul to learn more about her decision to attend culinary school and how it has transformed her career.

Prior to focusing on food, I was a television news reporter, including positions as a news anchor at Telemundo and Univision. During this time, I received five Emmys and nine nominations; five A.C.E. Awards; two Gracie Awards and the Edward R. Murrow Award for excellence in investigative reporting. I was also named by Hispanic Business magazine as one of the 100 Most Influential Hispanic Personalities in the United States.

How did ICE help you find your culinary voice?

When I first enrolled at ICE, I had no cooking experience. How brazen of me to dare enroll in the professional culinary program! But my interest was real—I had collected more than 200 cookbooks, which I used every day. I decided to enroll at ICE to learn more, and boy, was I in for the challenge of my life—surrounded by students that knew so much more than I did. It was intimidating, but not for long. Slowly, but surely, I found a way to express my culinary aesthetic and my interpretations of Latin favorites—both classic dishes and modern, healthier versions of traditional recipes. The instructors were key in my professional culinary growth. I am so privileged to call so many of them my friends today. 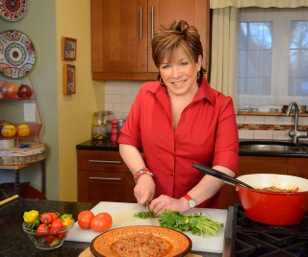 Where was your ICE externship, and how did it impact the rest of your career path?

I did my externship at one of the world’s best restaurants, Le Bernardin. The training was grueling and demanding. I worked relentlessly and learned about the discipline it takes to make it in one of the world’s top kitchens. I tried to absorb as much knowledge as possible about the ingredients used, the exquisite dishes offered, the creative process, the combinations of flavors and the chemistry of food. It was a challenging experience, but I was unyielding in my pursuit of learning and excellence.

What's your favorite part of your current work?

Currently, in addition to my ongoing work as a Chef/TV Host and guest on various networks, I’ve been creating webisodes for AARP on creating a healthy, balanced Latino menu. I’ve also been teaching Latin American, Mediterranean and healthy cooking classes at ICE’s School of Recreational Cooking, and have launched Riquisimo!, a tour company that offers culinary journeys throughout Spain. The best part of all of this, personally, is the creative part of cooking, both in its conception and in its presentation. I come from a family of plastic artists, so this is my way of expression.  More than anything, I love when someone says, "Ahh, that was delicious!"

What is your advice for current culinary students?

Study hard and be passionate about what you do. If you really love it, do not give up. There are so many possibilities to be explored.