Master the Dessert Buffet with King of Pastry Philippe Rigollot

Fans of the documentary Kings of Pastry are likely well-acquainted with Philippe Rigollot, who heroically was named Meilleur Ouvrier de France despite the demise of his sugar showpiece during the final moments of the competition. Yet what fans may not know is that Philippe’s wife and business partner, Elodie, a chocolatier by background, is an integral part of his work at the couple’s local pastry shop in Annecy, France.

The pair first worked together at Maison Pic, the only three-Michelin-star restaurant in France that is owned by a woman. In anticipation of Philippe’s upcoming hands-on advanced pastry course at ICE, Dessert Buffet, we reached out to Elodie to learn more about the couple’s work.

You trained in France — what was your or Philippe’s training like?

Philippe trained in the traditional fashion — a pre-apprenticeship at the age of 15, followed by two years of apprenticeship and a Brevet de Maîtrise or “Master’s Certificate” which took an additional two years. In fact, Philippe won a regional medal for being the youngest apprentice to earn his certificate.

When did you decide you were interested in competitions, in particular the M.O.F.?

Having grown up around Paris, Philippe frequently passed by the windows of Lenôtre, where he dreamed of working one day. After earning his master’s certificate, he was successfully hired at Lenôtre, which also housed a school of professional development for pastry professionals, in which the majority of classes were taught by MOFs. It was through his introductions to the MOF that Philippe first started thinking about competitions, and in particular, his goal to become an MOF himself. 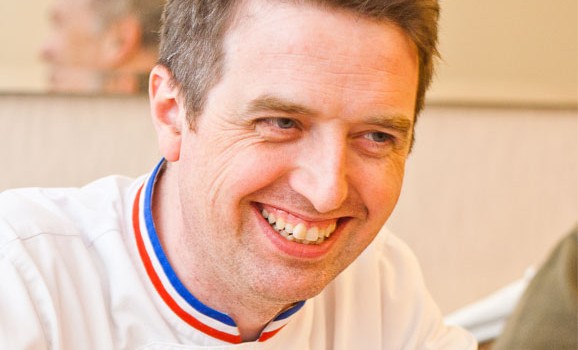 What advice would you have for students or working pastry chefs who want to compete?

To be a patissier is a profession based on passion, but also a profession that demands skill and precision. There is a proverb in France that says, “It’s through metal-working that one becomes a blacksmith.” To progress, you have to master the basics, train, familiarize yourself with your materials — in short, work as if every day is a day in the MOF competition.

How do you go about creating new flavors and recipes?

You have to be curious, enter into discussions with others, read…and gradually the ideas come to you. I experiment, I taste and I share those experiments with my spouse, my “right-hand man”.

What have been the biggest lessons you have learned opening your own business?

The most important lesson as a business owner has been that, no matter the level of skill of the person making an individual cake, it is important to ensure that throughout the year, all the cakes are created with the same level of precision and consistency. As for plated desserts, which are more unstructured, that is a different matter from the pre-made desserts sold in the boutique.