Culinary Arts Chef-Instructor Alan Kang shows students how to make dim sum and talks about his personal connection with this communal Chinese meal.

Students at ICE's Los Angeles campus had the opportunity to participate in a four-hour dim sum workshop, the kick-off to our new extracurricular Deep Dive series, exploring ingredients, techniques and cuisines to broaden students' horizons beyond the classroom.

Born to Taiwanese parents, Chef Alan Kang grew up at his family’s haute Chinese restaurant in Pasadena. After teaching the lesson on Chinese cuisine, Chef Alan sought to expand on its vastness with a dim sum demonstration. “It is one of my favorite memories as a kid and even now as an adult, getting dim sum with friends is something I do often,” he says. 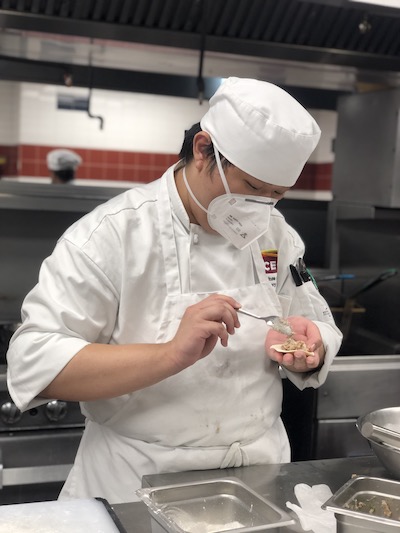 Dim sum is a Cantonese term for the steamed, baked and fried foods served as small plates — and it is not limited to dumplings. In addition to boiled, fried and steamed dumplings, like the shu mai taught in ICE's Culinary Arts program, another dim sum bite is turnip cake. “Turnip cake is one of my favorite dim sum items to eat, but I don't know if it's as popular as the other mainstream dishes so I wanted to spotlight it,” Chef Alan says.

He taught students how to make turnip cake, dumplings, shrimp balls and cheung fun, a rice noodle roll. “Shrimp balls are fun, and I wanted to have a recipe that was easy for students at any skill level or program,” he says.

Students worked in teams and were able to experiment with the recipes, adding their own creativity and ingredients that pleased their palate. When all the dishes were presented, just like at a regular dim sum gathering, students dined on the delights of their hard work. “There’s just something very communal about eating a bunch of small plates at a table and catching up,” Chef Alan says.

Here's one of Chef Alan's recipes from the demo.