Chef Alan grew up with family restaurant experience and went on to work in some of Los Angeles' popular restaurants, from Republique to Hinoki and the Bird to Bon Temps, with a culinary education.

Chef Alan Kang was born to Taiwanese parents in Northern California where he lived until his father's plan to open a haute Chinese restaurant in San Francisco was thwarted by the earthquake of 1989. The family moved from Oakland to Pasadena, opening Yujean Kang’s Gourmet Chinese in 1991, just under a mile from ICE’s Los Angeles campus.

Chef Alan’s father’s eponymous eatery received national acclaim. The restaurant landed on Esquire’s Best New Restaurant list and was considered a culinary landmark by Eater when it closed in 2012. During the two-decade run, the restaurant was not just beloved by Los Angelenos, it was the center of Chef Alan’s world.

“I basically grew up inside a restaurant,” Chef Alan says. “I was picked up from school, I would do my homework in the restaurant, help out in the back making dumplings or whatever, and I stayed until it closed when my mother, who worked front of house, would take me home.” Growing up in a restaurant family had a deep impact on Chef Alan’s decision to enter the profession, but it wasn’t a clear ambition until after he pursued social psychology at a community college. “I wasn’t really interested,” Chef Alan says of his studies. With his clear appreciation for food and dining, even outside of his own family’s restaurant, a friend suggested he apply to culinary school. “I had a deep understanding of that work ethic and sense of urgency,” Chef Alan says. An hour after emailing Le Cordon Bleu (LCB) Pasadena, he was touring what would be his future campus.

From the beginning, everything at Le Cordon Bleu just felt natural for Chef Alan. "Being in the labs, working with food, keeping the pace and making mistakes — it was a better environment for me," he says. "I learned more from being hands-on [in culinary school] compared with reading a book and taking notes [in the college environment]." Two of his LCB instructors, Chef George and Chef Chavez, would become his colleagues at ICE. "It is really comforting. I remember looking up during my demo and seeing Chef George in the room. He was one of my favorite instructors then, and even now working alongside him, I still think he is one of the best."

After graduation from LCB, Chef Alan externed at Drago Central, a celebrated Italian restaurant in Downtown Los Angeles, until his father needed assistance at his restaurant.

The culinary school grad with one year in a fine-dining Italian restaurant under his belt then learned his father’s tricks of the trade. “In Western-style restaurants, they tell you what to do,” Chef Alan says. "In Asian kitchens, they don’t tell you a lot. My dad would say, 'watch what I do, and take your own notes.'" When Yujean Kang’s closed, Chef Alan's father was hired by Innovative Dining Group in 2013 to open Chi Lin, a high-end eatery on the sceney Sunset Strip, and he brought on his son. Chef Alan explains the emphasis when they worked together was on observation which helped him become a better chef in prominent kitchens throughout the rest of his career: Patina’s Catal, Republique, The Peninsula, Hinoki and the Bird, Cliff’s Edge, The Factory Kitchen, and Bon Temps helmed by Chef Lincoln Carson. 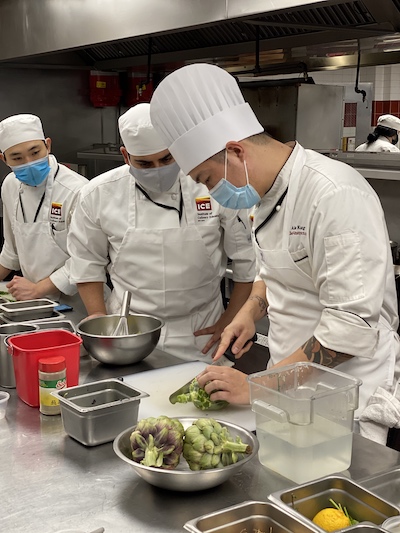 In 2020, Chef Alan transitioned to education at the Institute of Culinary Education. Before coming to ICE, his experience teaching was in the sports arena as a water polo coach and swim instructor. "It was super rewarding to pass on a skillset of something that you find joy in," he says. "I love cooking and to see the students now find that same joy that I had, that moment when it all just clicks, is incredibly rewarding to be a part of."

While the pool and the kitchen differ, both swimmers and chefs need their minds in the game to succeed. "I see students running around close to the window of presentation time freaking out with a panicked look," he says, "A lot of the time, I tell them to just breathe, just calm down, it’ll be okay. That can be said for many things. Even now when I’m doing something for the first time, if I feel wound up, I have to remember to breathe and calm down."

His main focus is teaching the latter portion of the Culinary Arts program to prepare students for their transition from school to externship sites. "I emphasize a sense of urgency, attitude and cleanliness — maybe attitude is first," he adds. "When you’re in school, you are paying to go to school, but when you’re in a restaurant they are paying you, and you have to change your attitude." In addition to perspective, he stresses the importance of speed. "You might be the fastest person in class, but you might be the slowest in the restaurant."

Of course, Chef Alan hopes his students find success. "Success is so subjective," he says. "Whether personal or monetary or fame — whatever they are looking to achieve, I hope they are able to use cooking and food as an avenue to find their own way to success." His ultimate goal is to be the chef-instructor that Chef George was to him. "I will remember Chef George for the rest of my life," Chef Alan says. "He had such a huge impact on me at school and to think I might have the same impact on someone else is a pretty great reward."

Study Culinary Arts with Chef Alan at the Institute of Culinary Education.