How to Grill Steak

Pro tips for sourcing, marinating and cooking beef for flavor and presentation.

Grilling is a dry heat method that uses radiant heat to cook an item suspended above the heat source. Some of the juices are caramelized directly onto the surface of the meat while others drip onto the heat source, combust and cause chemical reactions that result in complex flavors. The type of fuel you use, such as charcoal, wood or gas, will determine the types of flavors produced during the cooking process.

Grilling is best suited to tender cuts of beef, such as filet mignon or ribeye, which take a shorter amount of time to cook and have less risk of drying out. These tend to be more expensive, so it's critical to the bottom line to prepare them perfectly. We asked Los Angeles Campus President Lachlan Sands how pros prepare steak properly and avoid pitfalls.

The first step is selecting the cut of meat. “Beef is very expensive,” President Sands says. “One issue chefs face is we are always looking for a less expensive cut of beef that is more flavorful.” If not using a high-end cut, like ribeye or filet, he recommends grilling tri-tip, which is flavorful but tough. Slice it thin across the grain after grilling. "It will taste fabulous and be easier for your customers to chew.” Once you have selected your product, inspect it for consistent thickness throughout so it's cooked evenly.

Trim the meat to remove excess fat or silver skin, which is a membrane around the meat that looks like a thin coating, especially around filets. Ensure the meat isn't too thick so it cooks all the way through, cutting if necessary.

Then tenderize the meat with a marinade to improve flavor, moisture and texture. Allow to marinade overnight and then scrape off any excess before grilling. Culinary Arts Chef-Instructor Rich LaMarita demonstrates marinating here.

Another important step in the preparation is achieving the proper temperature of the grill and the meat. “You want to temper your meat, or bring it to room temperature,” President Sands says. “If the meat is really cold in the center, a medium-rare steak will end up raw in the middle.” Tempering is simply removing the meat from the refrigerator and allowing it to come to room temperature. This could take any range of time depending on the size of meat.

After the meat is tempered, pat it with paper towels until it's completely dry. Then, season the meat with salt and your desired flavorings right before you put it on the grill. “If you season too early, the osmotic pressure will draw out the moisture and it will get wet again, and then you won’t get those beautiful grill lines."

How to Oil a Grill

You want the grill “hot, hot, hot!” Preheat it long (at least 45 minutes) before grilling to open up the pores of the metal rods. To ensure the beef won’t stick, take a set of tongs and grab a folded paper towel soaked in vegetable oil to wipe the grill’s surface to lubricate it. 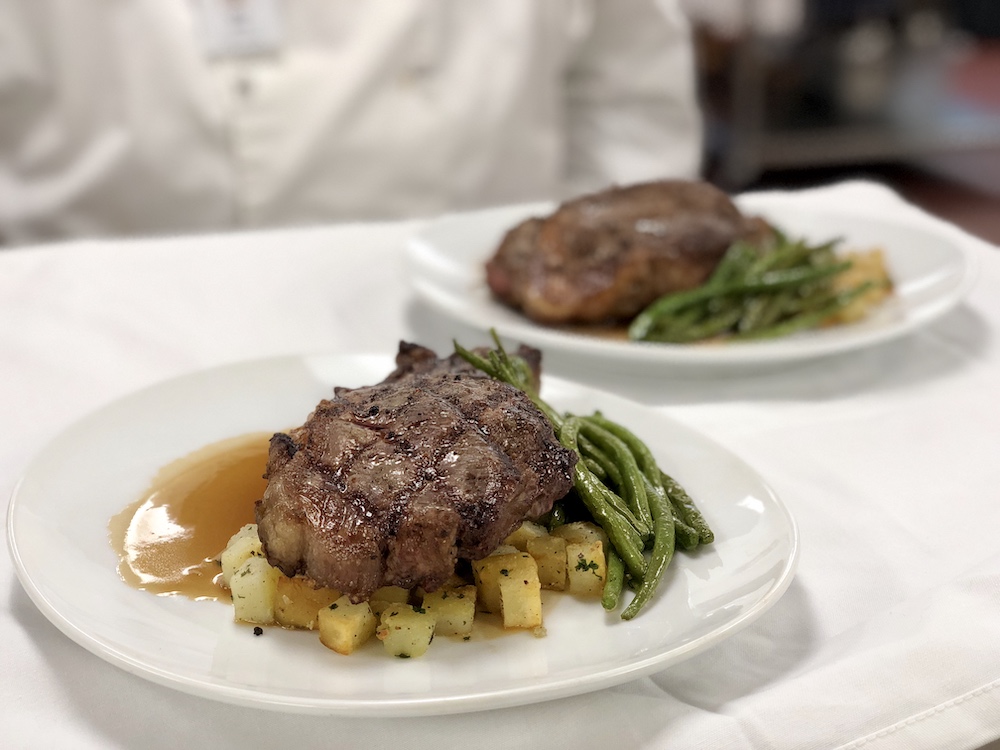 How to Get Grill Marks

Place the meat on the grill, turn the heat down to medium-high, and don’t touch it. “Don’t poke at it, don’t press on it!” he emphasizes. “Let it go a minute or a minute and a half to get that first set of lines.” Then use tongs or a fork to gently check if the meat releases from the grill on its own. If the meat is sticking to the grill, it needs more time. “It will lift off as soon as the Maillard reaction (caramelization) has reached a point when it releases from metal. It is a natural process, just be patient.”

“Our goal is to have that beautiful diamond shape,” President Sands advises. “Pick a point on the steak that is 10 a.m. on a clock face. Using tongs or a fork, turn it to 2 p.m., and put it right back down.” That movement will create diamond marks or quadrillage. Leave the steak on the grill for the same length of time in each position. “You want the grill lines to be identical in color,” he says.

Control the temperature of the grill by separating heat zones: Designate an area for thinner proteins that cook quickly to char the outside well and cook the product through. Identify a lower heat zone for thicker cuts that take longer to cook to avoid overly charring the outside before the inside is cooked through. Don't worry about smoke: As the meat cooks, fats and sugars will drip onto the heat source and caramelize, causing complex flavor compounds to rise up and envelop the item with a delicious, smoky, charred taste. But avoid flare-ups, when the flames ignite and surround the product, by removing excess fat and marinade from the product before cooking and moving the meat if this occurs.

Once it is cooked on one side, flip the meat over. “The side with the diamond grill marks is your presentation side,” he says. No one will see the opposite side on the plate. Finish grilling the meat by cooking until it has achieved that proper temperature the guest desires. Test the meat by taking the temperature with a high-quality digital thermometer and remove from the grill before it surpasses the desired temperature to allow for carry-over cooking. “The general rule of thumb is the meat will increase by 5 degrees for every pound of protein." For instance, if preparing a medium-rare steak, which clocks in around 128 F, remove from the grill once the meat reaches 124 F. Once off, let the meat rest for half the time that it cooked to allow the juices to settle prior to serving.

The final step is making the steak look delicious for your guests. Butter can make grilled steak glisten. “The butter will melt but not evaporate, so you never get that dried-out appearance." Et voila! Grilled steaks that will look beautiful and taste amazing every time.

Read more about beef and study meat butchery and preparation in Culinary Arts at ICE.

Should I Go to Culinary School?

My Introduction to a Wood-Fired Pizza Oven

How to Grill Fish