Clare Langan (Culinary, ‘11) graduated from Marist College with a degree in fashion merchandising and business and spent a year working in finance before she enrolled in culinary school with the intention of exploring a career focused on home cooking. The adventure has taken her from private cheffing to food styling to teaching home cooks and beyond.

When Clare began Culinary Arts classes at ICE in 2011, she'd thought long and hard about pursuing a culinary education. She grew up cooking and her passion for the art had grown throughout her life. She was miserable working a business development job, and the only thing she looked forward to was cooking when she got home.

“This was before the internet exploded with food,” Clare explains. “Magazines were huge and food media was very different than it is today. But I had noticed that a lot was rumbling in the world of home cooking.” Clare knew there was a budding, yet still underground, community of people crafting jam, pickles and sourdough from scratch. She saw a shift from restaurant chefs as the sole authority on food to home cooks being taken seriously. “I was very interested in that field. That’s been my career trajectory since I was in school, working with the home cook rather than in the restaurant industry,” says Clare.

Clare was in the minority. “Many of my classmates were very much on the fine dining track, and I struggled with that,” Clare says. Unfortunately, one of the main reasons she decided against going after a different path was the reputation of how women in restaurants were treated at that time. She heard horror stories about being a woman in the kitchen — she was told that making good money was unlikely, while harassment was all but guaranteed. “I was like, 'no thank you.' It’s a little dark, but it actually ended up serving me well and I think I made the right choice, but it’s kind of messed up,” Clare admits.

Despite this discouraging factor, Clare had a really positive experience at ICE. The moment she started the program, she reports that doors opened up for her. She got involved in as many opportunities as possible, including volunteering at the James Beard Awards with her classmates. Clare also had a really great relationship with her advisor. “She was so generous in connecting me to alumni at different food magazines when it was time to look for an externship,” Clare says. “I felt very supported. It was a community of people who wanted to help. It was a breath of fresh air compared to looking for jobs on the internet — having the connections from ICE was a game-changer.”

Clare completed her externship in the test kitchen at Every Day with Rachael Ray magazine, which she recalls being a wonderful experience. At the end of the three months, one of the editors connected her with a woman who was starting a personal chef company and wanted to hire people to distribute the workload. “I went from the test kitchen to personal cheffing,” Clare says. “Looking back at it, it was kind of a jump, but I learned a lot about cooking in people’s homes, what they have in their homes and dietary preferences.” She taught herself how to adapt French techniques to gluten-free and vegan recipes, which weren’t yet en vogue, for clients with restrictions.

After she spent a few years personal cheffing, Clare felt isolated and stagnant in her work and was ready for her next chapter. “I literally Googled ‘best food stylist in New York City’ because I was still very interested in food media. That was a great search — it led to seven years of on and off working as a food stylist,” Clare reveals. She worked at SeeFood Media, a branded content production company, as a jack-of-all-trades on the small team (under owner and fellow ICE alum Jamie Tiampo (Management, '06). This meant she chose props, planned pre-production and was active on set.

Clare’s next move was to Sur La Table, where she became the resident chef of the recreational cooking class program. She was there for nearly four years, working her way up from an instructor role to a position managing 20 chefs and 20 assistants. Since the store was the largest and most profitable in the company, Clare’s job was very busy. She taught five classes per week, in addition to her full-time responsibilities.

“Sur La Table was very formative for me,” she says. “I learned how to manage, and I learned even more about the home cook. I was there every day with classes of 16 students, fielding their questions and selling a lot of cookware. That was part of my job, getting to know the product and really integrating that into my lesson, which was in-store marketing essentially. I had a really great time there. It was super crazy at times, but I loved it.” 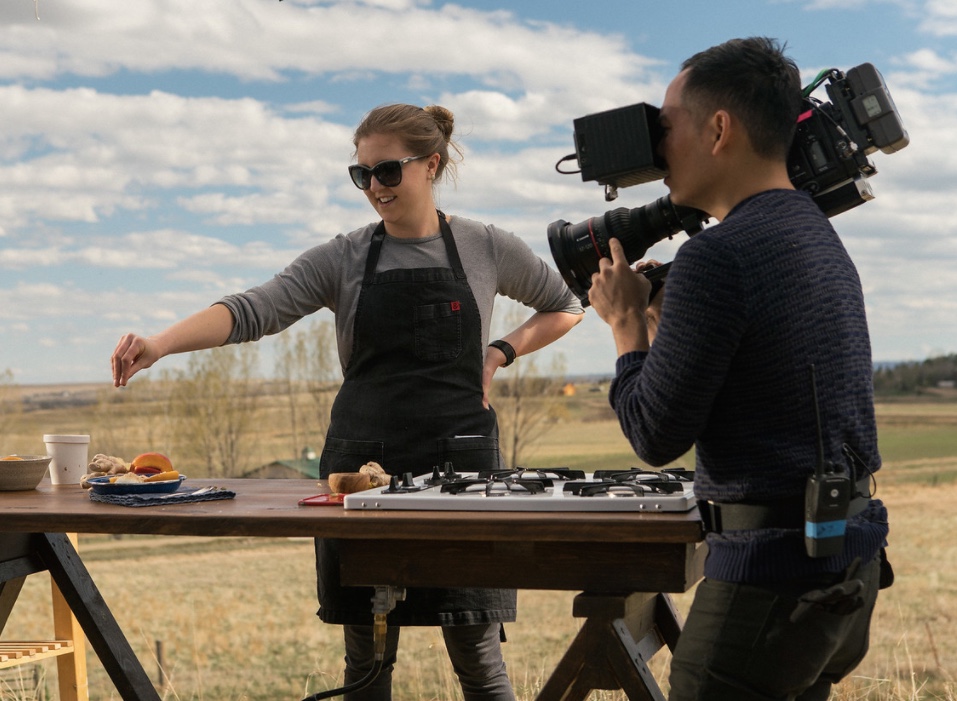 At the end of 2016, Clare was at another crossroads. She was burnt out and wanted to do something different. She contemplated moving back to her hometown and opening a little cooking school, but realized she didn’t want to live there. She also thought about returning to private cheffing or traveling. “I was talking to one of my mentors about this and he mentioned he just got his TV show for A&E greenlit by Katie Couric’s production company and he asked me to be the culinary producer. That was huge for me,” Clare says.

Clare produced and food styled two seasons of the food waste and travel show "Scraps." She spent January 2017 until October 2018 traveling around the country with a production crew, shooting episodes with chefs in various cities. “It was a deep dive into how to produce a cooking show, sometimes in the wild where there was no running water,” Clare says. “Every day was a new challenge. It was really spectacular. I gained a lot of confidence in myself and what I was capable of doing, and it really opened up some doors for me in terms of where I could take my career.”

Once Clare wrapped two seasons, she began freelancing again in New York, developing recipes for brands like Morton Salt, working on an app for Save the Food, and collaborating with KitchenAid. “Again I was feeling a little isolated, and I needed to be back on a team and in a more dynamic, challenging work environment,” Clare says. 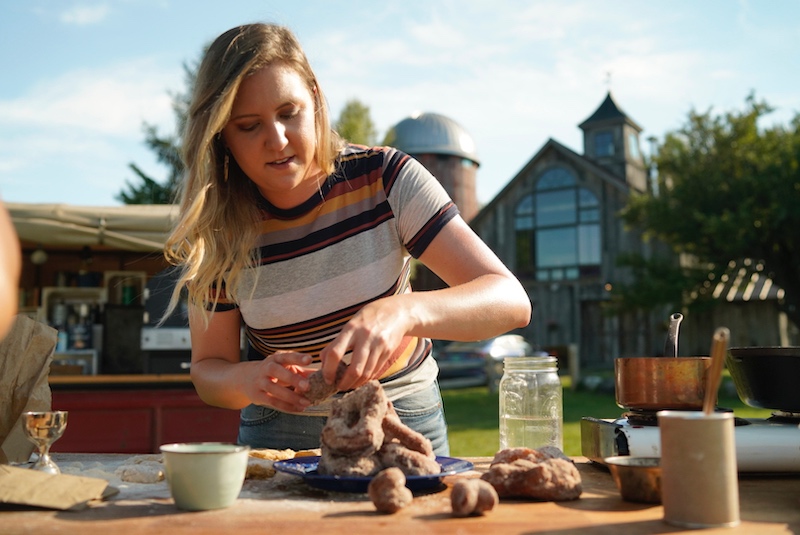 She started a new job search and secured a position in Oakland, California, at Cost Plus World Market as a culinary trend director. Clare made a big move across the country for the opportunity and has been in the role for nearly a year. “Every single skill that I’ve picked up is used every day,” she says. “I’m the first person to hold this job in the company, so there’s a lot of opportunities for me to carve out of the role and I offer a much different perspective than other folks.”

Clare works with food buyers in identifying trends for the coming seasons, attends trade shows and conferences, and handles video production and social media content creation. She also does in-house product development for the company’s private label food products, like baking mixes and spice blends. “I have a test kitchen that I run and we develop those products,” she explains.

In addition to this stimulating, new path, Clare is always thinking of side pursuits. “I’m very motivated, driven and goal-oriented. It’s helpful to have other projects going on that keep me interested. More than ever, these days, having your hand in a few pots is very beneficial,” she says. She does pro-bono consulting for food companies that aren’t sold at World Market because she enjoys helping with branding and positioning. “I’m also working on a cookbook proposal that I've been chipping away at for a year,” Clare says. “That’s been a dream of mine forever. I would really like to make that happen. I’m obsessed with cookbooks so it would be amazing to have one of my own.”

Clare has some specific advice for ICE students who are interested in the home cooking path. She recommends finding someone in the job you want and asking to shadow or help them for a day, like a stage. It’s important to understand the dynamics and reality of a career before jumping into it. Clare notes that food styling and recipe developing aren’t totally glamorous, so you should explore behind the scenes first.

If you do follow that path, Clare endorses the lessons she learned at ICE. “The biggest one is organization and thought process,” she says. “Mise en place is so helpful, not just in cooking, but in anything you set out to do. Getting everything in place before you actually start doing the thing is a huge lesson. I like to chop as I go, but when I do mis en place, things go much better.”

She also wants recent graduates to know that it takes time for career success to materialize. Clare graduated in 2011 and only in the past couple years has she felt like she has her footing. “Your version of success will also change. It’s important to have personal goals to know when you succeeded,” she says.

Clare has certainly achieved success in the home cooking sphere and will continue to do so. “I still get people asking me if I would want to open a restaurant and I just laugh and say no,” Clare says. “I have so much respect, especially nowadays, for my peers who are in restaurants. I love restaurants, I support them, they’ve just not been my career path.”

Explore a culinary career outside of restaurants with ICE's diploma programs.