The pastry chef went right to culinary school after high school and never looked back.

California-native Sohrob Esmaili had a penchant for cuisine from a young age. “I was really into baking and cooking as a teen, and I would bring things I prepared at home to school,” Chef Sohrob says. His culinary gifts — from lasagna to cinnamon rolls to cheesecake — were welcome by all, especially his teachers. That positive reinforcement encouraged Chef Sohrob to continue to shower his educators with food, all while his mother identified a potential career path for her son.

Aware of his aptitude in gastronomy, Chef Sohrob’s mother suggested he attend culinary school to learn the craft. At age 17, he graduated from high school and a week later began his pastry studies at Le Cordon Bleu in Pasadena. “I was a little scared to leave the house and move far away at a young age,” he says, referring to his decision to remain in Southern California.

While at Le Cordon Bleu he often sought the advice of his chef-instructors, which included Chef Herve Guillard, who’s now the Director of Education and Lead Chef of Pastry & Baking Arts at ICE's Los Angeles campus. As Chef Sohrob’s program neared an end, he decided to further his education at the Culinary Institute of America in Hyde Park, New York, where he focused on savory cuisine for his bachelor’s degree in Hospitality and Culinary Arts. However, his deep interest in pastry persisted, and early on he returned to focus on baking. “It was a relief to switch back to pastry,” Chef Sohrob says. “Everyone in the class was super passionate, and everyone in pastry really wanted to be there.”

Interested in fine dining, Chef Sohrob completed his externship at the esteemed Jean-Georges restaurant in Manhattan under Executive Pastry Chef Johnny Iuzzini. “It was a very high-strung environment, but I learned a lot,” he says. The 14-hour days were long and yet the training prepared him for his next position as pastry chef at Tribeca’s The Harrison, where he took on more of a leadership role.

When the restaurant closed, Chef Sohrob moved on to the legendary Gramercy Tavern, where he was part of a large pastry department that worked on chocolates, breads, pastries, custards, ice creams and more. He was eventually promoted to sous chef at the restaurant, but California was calling and Chef Sohrob decided it was time to return to his home state. 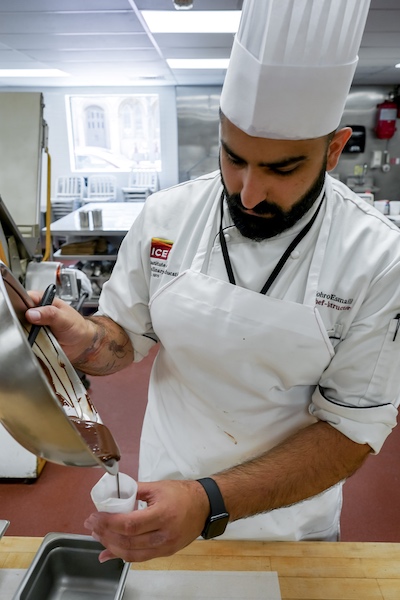 In 2019 he joined the pastry program at the Proper Hotel in San Francisco where he created the menus for the property’s cafe, bar, restaurant and lounge. “We developed an in-house bread program where we made our own burger buns, sandwich rolls, bread and even cultured our own butter,” he says. There, the pastry kitchen cranked out croissants and danishes for the café, and for the lounge, Chef Sohrob developed Mexican-inspired items including churros with tequila-infused chocolate dipping sauce and bourbon budino (a custard or pudding). “I got very assertive and I wanted to fill up all of our venues with pastries,” he says.

When Chef Sohrob learned of an opportunity to compete in Food Network’s “Spring Baking Championship,” he embraced the challenge. “I was happy to go and be in a room surrounded by bakers and pastry chefs that knew what I was talking about,” he says. To prepare for the competition, he timed himself while attempting mock baking challenges. The vetting process was rigorous and included the show’s producers combing through social media accounts and studying Chef Sohrob’s portfolio. At the end of the day, all of the preparation paid off, as Chef Sohrob was crowned the winner of the series. The humble chef says, “Every week I was prepared to go home, and then I wouldn’t lose!”

After the show aired, COVID-19 hit and the Proper Hotel’s dining rooms came to a standstill. Fortunately, having stayed in touch with his mentors from his school days, Chef Sohrob reconnected with Dean of Students Herve Guillard, who suggested he apply to teach at ICE’s Los Angeles campus.

Chef Sohrob joined ICE in the spring of 2021 and has already made an impression on the students in the pastry and culinary arts programs. One student recently stopped him in the hallway to let him know how he had opened her eyes to the world of pastry. Chef Sohrob attributes her response to his style of teaching and the one-on-one attention he enjoys with students.

One of his favorite things to teach thus far is viennoiserie, as he believes it is a lesson on time management. “There are breaks between turns and you must find projects to fill in the time,” he says. “There are always side projects or ways to prepare for tomorrow; you have to do what is necessary.”

His advice for students, no matter what path they pursue, is to always be comfortable and remain calm. “You need to have a plan and be organized,” he says. “You have to be comfortable or your food will not come out well. The stress will show in your work. Be confident in your abilities, be proud of where you are and what you’ve done, and keep going.”

Study with Chef Sohrob in Pastry & Baking Arts at ICE.

How to Make a Mold