ICE alum Erin Gruber (Pastry, '21) modeled for Vogue Italia and Vogue Japan magazines, but the harsh reality of the modeling industry pushed her to chase her food dreams at culinary school and launch her career at Wolfgang Puck’s Spago.

Erin Gruber was genuinely captivated by the prospect of working with pastries in eighth grade, when her classmates were enticed by desserts during a mentorship program at a bakery. While the notion of inhaling the aromas of fresh baked goods and sampling cakes was alluring, Erin was more intrigued by the production of professional desserts. That experience laid the foundation for her to pursue a position at Provisions, a local bakery.

"It wasn’t until I needed a job where I asked myself, 'What do I want to do with my life?' And I just fell in love with [baking] at Provisions," she shares.

Born in Orange County, California, and raised in Eugene, Oregon, Erin had an interest in the arts at a young age. She first pursued music, which subsequently led to a modeling career. "I went to a music competition in LA and part of the package was modeling, so I had to do runway shows," Erin says. Unexpectedly, she felt a sense of empowerment and shifted her singing aspirations toward a future in modeling. Erin regularly landed assignments in Portland, Oregon, a two-hour drive away, which included photoshoots for major sportswear brands like Nike and Adidas. "I have never been into sports, but it was fun to pose as an athlete for a day," she says.

After high school, she continued to pursue her professional modeling career, which included magazine shoots with Vogue Italia and Vogue Japan and traveling abroad. Unfortunately, it was on one of these voyages that she was exposed to a dark side of the industry.

"I went out of my way to lose weight and went to Milan, but when I was there, they told me I needed to lose even more weight," she says. Then and there Erin decided, "I’m not going to put up with this and instead, I’m going to eat all the food [in Milan] that I can!" She remembers that pivotal decision as a "fun rebellion" and her time in Milan led to an epiphany. "I had already taken an interest in baking at Provisions, but this was solidifying the world I want to be in, not a world that would take me away from food," she says. 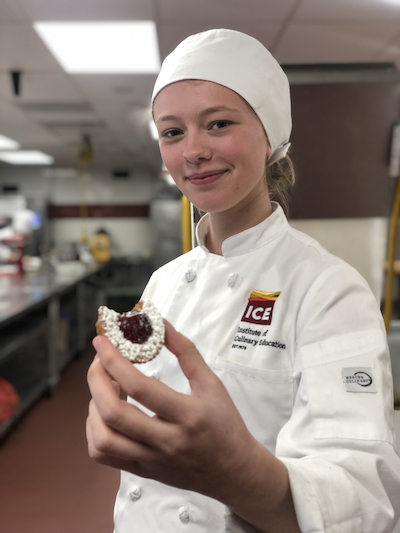 Erin had previously considered formal culinary education, but teachers at a catering class dissuaded her, advising she learn on the job instead. Erin decided to research culinary schools. "I figured that if I went to a four-year college and didn’t find anything I liked as much as food, then I would be wasting a lot more money than if I went to culinary school and had an amazing time," she said.

When she toured ICE’s LA campus, her hunch was confirmed. "Chef Herve Guillard was making buckwheat crepes and it was really exciting," she remembers. "I had been on other four-year college tours and it was exhausting. The feeling I had after leaving that school tour was definitely telling in that it grabbed my attention."

In school, Erin found her classes stimulating, and she bonded with classmates who shared a similar passion. Unfortunately, in the middle of her Pastry & Baking Arts program, classes were suspended due to COVID-19. She returned to Oregon for a time and then went back to work at Provisions when things opened up. Determined to finish her program, however, she returned to the classroom to complete her studies in February 2021.

"After being comfortable at home, it was hard to leave and go back to the unknown," Erin says. "But once I was back it was like, okay, I’m inspired again. I’m in my element." A fan of all things baking, Erin has a keen interest in wedding cakes, which she had the opportunity to design for the final project of the program. "When we first started with Chef Missy Smith-Chapman and cake decorating, that was the most exciting part for me. I was finally able to get creative and show off my aesthetic," she says. Erin’s final tiered cake featured stargazer lilies and a take on a stylized sweet pea.

After completing her in-class hours, Erin headed for Beverly Hills to Wolfgang Puck’s illustrious Spago, under the tutelage of Executive Pastry Chef Della Gossett. Given the restaurant’s expanding outdoor footprint and the return of dining indoors at the time, Erin experienced a very fast work pace. "Knowing the specifics of pastry and techniques was super comforting because I was in a rush, rush, rush environment," she says. "Having those tools in my pocket was really helpful because there were so many other stressful things going on. It made it one less thing to worry about." Erin worked on some of Spago’s signature desserts, including Kaiserschmarrn (a sweet pancake) and soufflés, and she had a love-hate relationship with the restaurant’s deconstructed vacherin (a meringue-based French dessert). "It was a favorite because it is so artsy and abstract, but my least favorite because when someone needs it on the fly, I couldn’t quickly pick up seven meringue leaves!"

While Erin’s modeling days are behind her, she draws comparisons from the two worlds. "Going to Milan and Spago, separately, were the hardest things I’ve ever done," she says. Traveling alone in Milan without her family and being told to lose an unhealthy amount of weight was not a rewarding experience, she shares. "Whereas at Spago, it was super difficult, but I had the support of Chef Della and my coworkers, and it was satisfying to overcome something like that."

Erin has since returned to Oregon where she recently accepted a new position as a cake decorator at custom cake shop Sweet Life. Before returning to her home state, she got a taste of the sweet life as a dinner guest at her externship site, Spago. "It was my last night in LA and I got the VIP experience," she says. "It was nothing I had remotely imagined dining could be."

While Erin was unsure of what the outcome would be, she’s satisfied with her decision to attend pastry school. "School gave me the motivation to strive for what I want," she says. "A lot of people get their experience from working, and I’m not shaming that at all, but I feel like there is an enthusiasm that school gives you. Being in the environment with chefs who are passionate about what they are doing and students who are excited to be in this industry put me in the right mindset and allowed me to feed off everyone else’s enthusiasm." Erin dreams of becoming a wedding cake decorator, and she's well on her way.