Here's how Micaela Diamond changed titles from Cher to Chef.

Micaela Diamond shares her shift from the performing arts to culinary arts and how both creative dreams became realities in New York City. After Broadway shutdown during the pandemic, she enrolled at the Institute of Culinary Education, and now her stomach sings.

Before the pandemic, I found myself performing for Hillary Clinton, Kim Kardashian and a slew of other celebrities that made my life feel a bit like a dream. I had just graduated from high school and was making my Broadway debut as Cher in “The Cher Show.” It was a complete dream come true, and the years of practicing my signature for the stage door in my chemistry notebook were finally paying off. 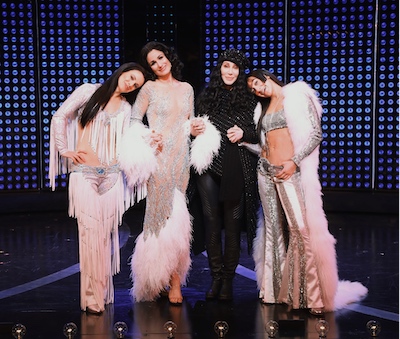 It was the summer before I was supposed to leave for Carnegie Mellon University, one of the top musical theater schools in the country — on a full ride — and I got an audition to play “Babe.” I knew nothing of Cher besides hearing “I Got You Babe” in various Duane Reades around the city and so this audition felt somewhat useless. I threw on some bell bottoms and straightened my Jewish, curly, blonde hair and went to one of the biggest casting offices in New York. Callback after callback, I did more research learning about Cher's music, her Oscar, her bajillion boyfriends, and her plastic surgery (she did not remove her bottom two ribs, I confirmed this rumor with her, personally!). She had quite the life, and maybe, just maybe, I could pull this off. And then, unbelievably, I did. So the next two years of my life were filled with wigs, lower back pain, a Tony Awards performance (basically the James Beard Awards of theater), and a new platform my Gen-Z self was excited to use to make small change. There were 90 million highs and 10 million lows, and that’s about the ratio of life that makes you wonder how you got so lucky. At least for me.

Throughout these two years, there were also endless thoughts surrounding food. These thoughts ranged from, "How do I look smaller in this 1-inch skirt Bob Mackie (basically David Chang of fashion) personally tailored for me?" to, "Cooking food is the most delicious, beautiful and comforting process in the whole world!" I cooked a lot, and I ate a lot. I was navigating my thoughts about being smaller and simultaneously navigating New York food in a bigger way than when I grew up here, frequenting farmers markets and my favorite hole-in-the-wall places, like Nana Thai on 21st street, or making an excuse to fine dine at Blue Hill.

After Cher and a quick stint in LA to do a fun Coen brothers' play, I traveled to Paris. For my last night, I ate at L’Avant Comptoir in St. Germain with my lover. We got a bottle of orange wine and ate until our stomachs sang. The level of “worth it” after that trip was so high that I started to ask when and why fueling my own body had to be earned or deserved in the first place. The idea of feeding myself food that made me happy, nostalgic and full went home with me. It became this joy I kept chasing in my own home kitchen and slowly but surely, I bought new jeans and cooked cheesy lasagnas and then ... the pandemic hit.

Theater plays its part in shaping the heart of New York similar to the way food does. Being an actor, I formed a relationship with 1,400 people every night, hopefully transforming them in some small way while I trusted them with my heart for two hours and 15 minutes. The Broadway theaters became silent, like so many other buildings in New York, and this jolt of transformation from 55th to 39th Street at 7 p.m. every night was gone. Thousands of actors, stage managers, choreographers and dressers desired this connection while struggling with an intense loss of identity. Who were we without this jolt? 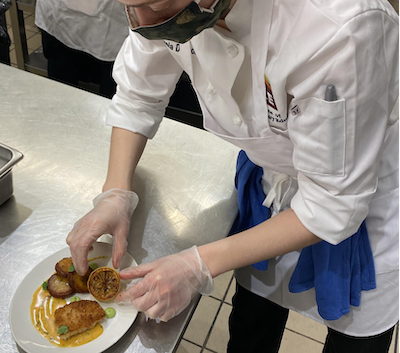 I was one of the lucky ones. I kept finding myself a little more each time I turned on the oven or tried a new recipe. I found this passion for food that could fill me up and let me explore my creativity in a different way. This passion has only grown since I started Culinary Arts classes at ICE in September. I am now making fried onions at Vic’s downtown under Chef Hillary Sterling, and let me tell you, those onions make my stomach sing.

The hustle of restaurant work and theater have so many similarities. The physical labor and hours, the passion and the pressure — these are things I am somewhat used to, but there is a complete and utter new-ness and challenge to all of it. It has saved me in so many ways. How I will combine the two loves of my life is the question, but one I am lucky enough to even ask myself. Cooking at our core is so simply and completely intertwined with our human instincts. Unlike bursting into song when you fall in love, but what can I say? It’s fun. Both tell stories and inadvertently tell the ones we as individuals are drawn to. Asking myself, "Why this one?" "Why this plate/character?" "This cuisine/story?" Hopefully, through answering the hard questions, we begin to lift one another’s voices and find that jolt and connection we all so dearly miss.

Explore a career change like Micaela with ICE's career programs.