Try not to eat too much.

After a recent trip to South Carolina, ICE alum Pamela Vachon (Culinary Arts, '11) has a new found respect for the marathon eating event that is a food festival.

Walking around Greenville, South Carolina’s Fall for Greenville festival with an official “judge” badge and clipboard, cutting the line as politely as possible to get a taste of each booth’s offering, I was frequently asked: “How did you get this job?” This was always asked in a spirit of envy — as in, “how can I get this job?” Who wouldn’t want to be in charge of tasting and scoring every dish at a food festival?

The answer to that question begins with my culinary education at ICE New York, though it was a circuitous path from completing the Culinary Arts program to food festival judge. I hope this demonstrates that there are no prescribed outcomes from attending culinary school, and that many different paths are available in the food industry, even ones that you never anticipated.

In short, during my program at ICE I took a front-of-house job — basically my first restaurant job ever — to round out my education and to maintain some income. After graduation I continued working front-of-house, going from server assistant at a casual barbecue restaurant, to bartender, to fine dining captain at a Michelin-starred restaurant, all within a span of five years. The connections at my first restaurant job led to an opportunity to do some food writing; my continuing restaurant experience coupled with my culinary education furthered this, helping ideate pitches to editors at various media outlets. Eventually my online food writing presence put me on the radar for Fall For Greenville’s organizers to invite me to be one of 10 food judges for the 2021 festival. Among the other nine journalists was another ICE grad — Jenna Helwig (Culinary ‘08), the Food Director at Real Simple.

See how Jenna and other ICE alumni are thriving in food media.

Our task as culinary judges was straightforward: taste 45 dishes over the first two days, one dish from every restaurant, and score them according to taste, presentation and creativity. After which, judges met to deliberate which of the five top-scoring entries in both savory and sweet categories should win the Silver Spoon and Sugary Spoon prizes. (The vendors that won each prize received a plaque to hang in their booths during the final day of the festival, which came with a near-guarantee that they would sell out within the hour.)

This task was seemingly straightforward, but it was no small feat to taste that many dishes in that amount of time, even if you think you have a voracious appetite. I also found it difficult to stop after only a bite or two of dishes I would have happily eaten in their entirety, knowing that I had to save space for everything else I had yet to taste. Admittedly, some of the judges were more disciplined than I was, and I regretted some of my early decisions to indulge further than I needed to in order to make a good assessment of later dishes. 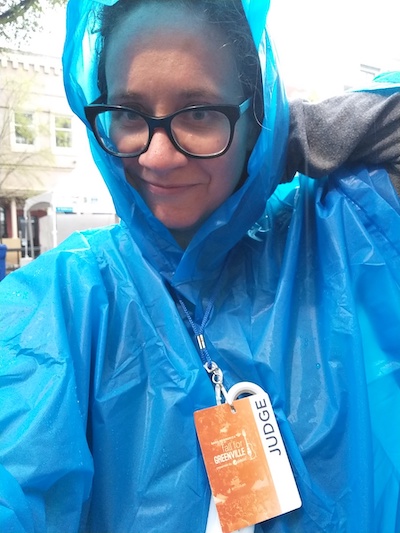 Beyond the inherent challenge of marathon eating and of environmental logistics — it was pouring rain when the festival began and ponchos were procured — being a food festival judge was an excellent exercise in culinary assessment. Whether you’re experimenting for fun in your own kitchen, writing a cookbook, developing dishes for a restaurant, dabbling in review writing or merely dining out and exploring why a dish does or doesn’t work, being able to comparatively evaluate dishes is a useful practice.

Taste was worth the most points for every dish, and was probably easiest to score. Flavor can of course be subjective and food professionals can have preferences about foods they do and don’t like to eat, but determining whether a given dish’s overall flavor, balance and texture succeeded was largely instinctive. If I’d ordered this, would I be happy with it? (Dwindling stomach real estate notwithstanding.)

The Fall for Greenville festival celebrates the town’s local restaurants, so everything from pizzerias and food trucks to upscale bistros and more were included in the mix — and being an expensive restaurant didn’t automatically translate as having an advantage. There were definitely pizza slices that scored better in flavor for me than some dishes whose aim was much higher but the execution fell short. As it was a food festival in the Southeast, more than 10 percent of the dishes were variations on shrimp and grits. As a New York City resident, I now have a much deeper understanding of the considerations that go into developing a satisfying bowl of grits. (Dairy is very much involved.)

When it came to presentation and creativity, scoring got more conceptual. For appearance, I had to evaluate whether each dish looked appealing for what it was rather than pitting them against each other. In an outdoor festival setting, it’s much easier to make pastries and uniform items like empanadas look attractive compared to traditional dishes like braised lamb or mole. How attractive is pizza, really? (Who am I kidding — it’s extremely attractive.) Food trucks were definitely at an advantage, as they were working with their own equipment, while restaurants set up in booths were dealing with rental equipment and chafing dishes. That being said, little details went a long way. Two of the winning dishes used small elements to their advantage: a simple dosa plated on a banana leaf and a traditional taco whose elements popped against a blue corn tortilla. 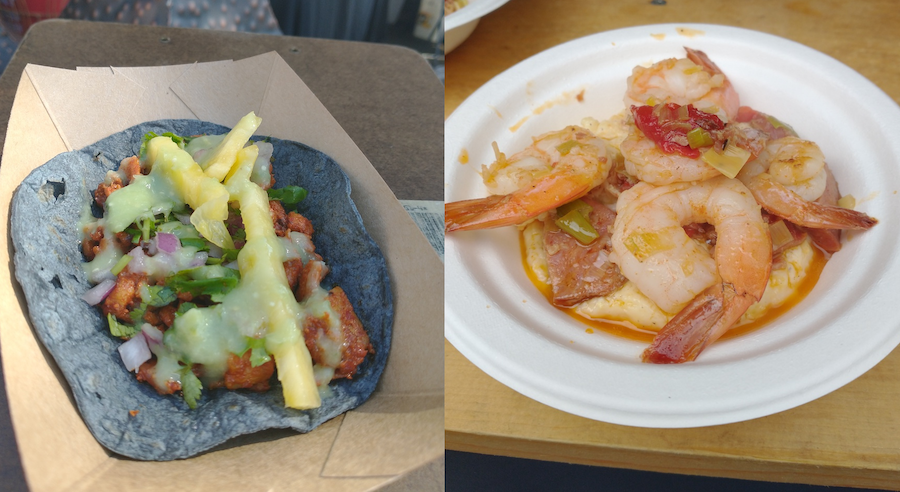 Creativity also involved more of a sliding scale: there’s nothing inherently creative about certain traditional dishes, unless they have been reconceptualized in some way, but I didn’t want to penalize restaurants who were executing traditional dishes brilliantly. Most of the restaurants, regardless of cuisine, offered something that normally graced their menu. So I had to take other factors into consideration: a written description of the dish (grading on a curve when English was not someone’s first language), or engagement with myself or other judges at the booth. Most of my creativity scores were right in the middle of the range, exceptions being given only when someone really had done something out of the ordinary, either by offering a dish they had designed specifically for the festival, or reimagining a classic.

Once all of the scores were tallied, the judges reconvened to decide which were the top dishes. I was pleased to find that we were all pretty aligned with the top five entries for both savory and sweet, and ranking the winners was a relatively uncontentious process. There were no big surprises, other than perhaps the fact that I was hungry again the next day.

Dive into the world of food at ICE.