The History of Corn’s Prominence in Venezuelan Cuisine

An essential staple of many South American diets, corn has been ubiquitous in Venezuelan cuisine. The crop is used to make a variety of popular dishes that span from arepas to empanadas to the holiday favorite, hallacas. For centuries, Latinos have transformed corn into national dishes that are comforting, delicious and important sources of nutrition.

Growing up in a Venezuelan-American household, arepas were a staple of our daily breakfast. This typical South American comfort food is made using a handful of simple, household ingredients like ground corn, water and salt and stuffed with virtually anything from an avocado chicken salad — called reina pepiada — to beans and plantains. Upon further exploring other neighboring Central and South American countries’ cuisines, it dawned on me that corn tends to prevail in many shapes, forms and varieties among the culinary traditions that define these areas.

In particular, Venezuelans utilize corn for a medley of dishes like hallacas, empanadas and cachapas — all very popular menu items that make up the local diet. My grandma would often say, “un bebé nace con una arepa debajo del brazo,” which means, “a baby is born with an arepa under their arm.” This common Venezuelan expression insinuates that it’s almost instinctual to eat the English muffin-like sandwich and that it’s basically written in a newborn’s DNA.

But at which point in time did corn become the predominant and essential staple of everyday Venezuelan life that it is today? According to an NPR interview with a Venezuelan writer named Alejandro Puyana, it is believed that even before Europeans arrived in Venezuela in the late 1490s, the “indigenous women in the region — that now makes up Panama, Colombia and Venezuela — would soak maize kernels, dehusk them, dry them and grind them into a fine flour.” Then, they would mix that flour with water to create balls of dough and then flatten them into disks.” Puyana describes that they would then go into a budare, which is a “hot clay surface that would toast the cakes on both sides but leave the inside soft and moist.” 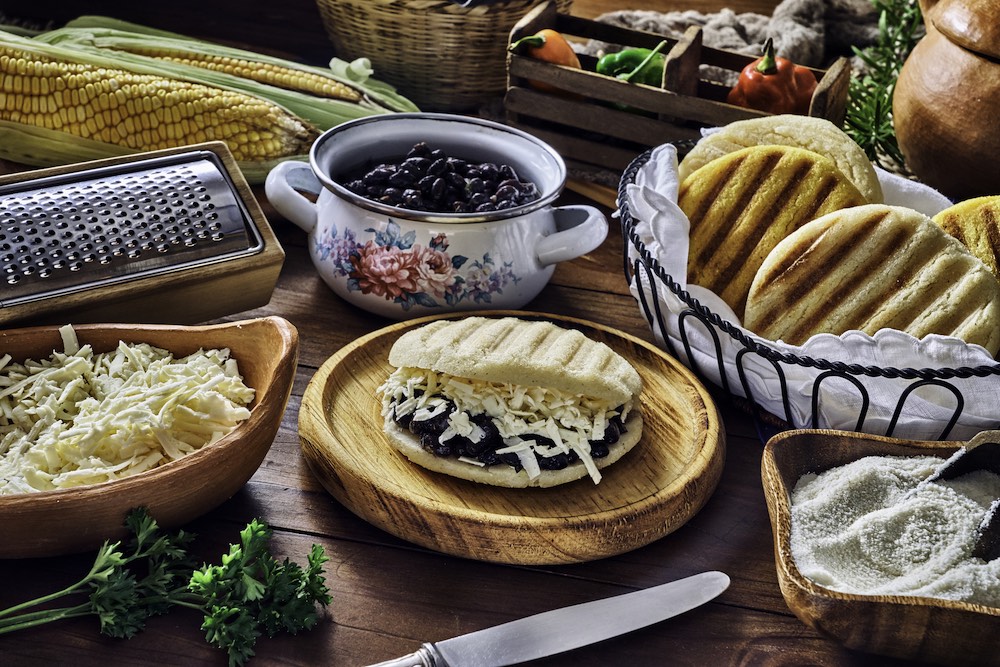 Interestingly enough, Puyana recounts that “José De Acosta, a Jesuit explorer, and naturalist of the 16th century, wrote that the budare was like a sacrificial stone for the rite of the first bread.” He describes that “the society's almost religious devotion to the arepa has arguably been the only indigenous tradition to survive intact through Spanish colonization.”

Today, however, most people rely on precooked cornflour to make most of these staple dishes, which has proven to be much less labor-intensive than using freshly ground corn. On December 10, 1960, Empresas Polar — a company that started as the nation’s largest brewery — released arguably their most popular product, Harina P.A.N., thanks to creators Juan Lorenzo Mendoza Quintero and Carlos Roubicek. Nowadays, you can find these iconic, sunshine yellow and royal blue rectangular bags of precooked cornflour in almost every Venezuelan household.

Though Venezuela has been fraught with political unrest for over a decade that has led to a scarcity of resources, corn still prevails as a significant nutrition source. According to Puyana, before the current food crisis, “Venezuelans ate an average of 66 pounds per person per year of Harina P.A.N.” That’s a lot of corn! 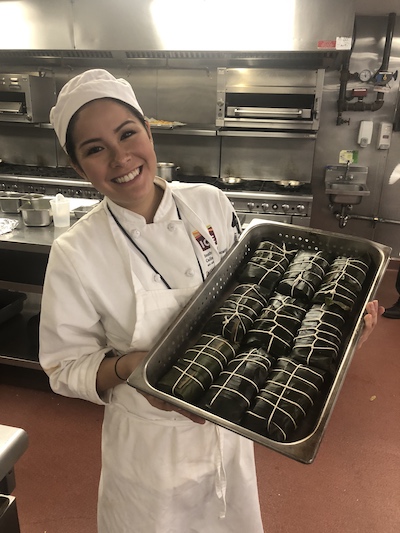 One of the most important food-related holiday traditions for Venezuelans is preparing hallacas to celebrate the Christmas season. Preparing this dish involves gathering your loved ones in the kitchen to make these tamale-like corn dough pockets by hand and stuff them with a flavorful stew. During the international cuisine module of the Culinary Arts program, my fellow peers and I worked together to make hallacas for a South American-inspired feast that featured other Latin American classics like Peruvian ceviche with tostones and Brazilian moqueca!

Typically, the hallaca filling is made with ingredients like chicken, pork or beef and has European-imported ingredients like raisins, capers and olives. The cornflour dough gets its distinct golden color from annatto, derived from the achiote tree’s seeds native to the land. Each hallaca is wrapped in a banana leaf and boiled until fully cooked.

This dish represents a melding of cultures and socioeconomic classes, as slaves created it during the colonial era utilizing the scraps from their master’s leftover holiday feast. The tale goes that a master tried this creation and loved it so much it became a staple of the Christmas menu. Nowadays, hallacas are symbolic of the holidays and enjoyed by all Venezuelans alike.

Aside from hallacas and arepas, Venezuelans also enjoy other corn-derived dishes like bollitos, which are boiled cornmeal doughballs that can be stuffed with ground beef and slathered with a creamy tomato sauce. Another popular dish is empanadas that are crescent-shaped pockets of cornflour dough stuffed with shredded white cheese, ground beef or shredded chicken and fried until golden and crispy. And if these weren’t enough, there are also cachapas, sweet and savory corn pancakes topped with queso de mano, a soft, white cheese, similar to mozzarella.

As many Venezuelans have fled the country due to political turmoil, there has been a globalization of popular dishes like arepas and empanadas outside the nation’s borders. Just a few blocks from the Institute of Culinary Education's Los Angeles campus, you’ll find two authentic Venezuelan eateries, Chamo and Amara Café, serving up these classic favorites. Sadly, however, the small hole-in-the-wall arepa spot nestled in the heart of Manhattan’s East Village, Caracas Arepa Bar, recently announced it would be closing its doors after 17 years due to the pandemic’s impact on business. Fortunately, their Williamsburg location remains open to welcome Venezuelan cuisine newbies and natives alike!

The Magic of Oaxacan Mole