It’s not every day you see a pig indoors. But walking into a butchery class at ICE, that is exactly we saw. 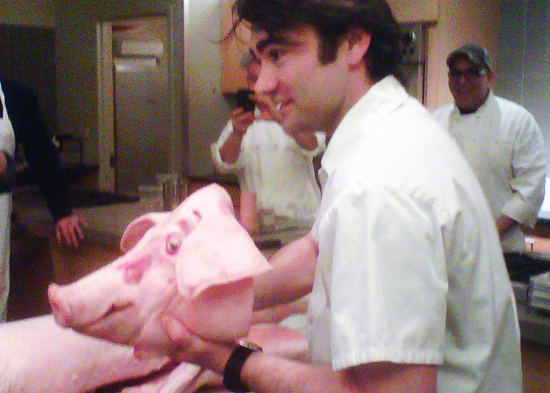 Along with a group of 16 eager recreational students in ICE’s demonstration kitchen, guest Chef Instructor Gaetano Arnone, Sous Chef at Salumeria Rosi and former butcher at Eataly and Dickson’s Farmstand Meats, led us through breaking down an entire 170-pound pig. And amazingly, not a bit went to waste.

Gaetano first became interested in pig butchery while looking for ways to cut corners at his family’s restaurant in Southern California. He quickly realized that by buying whole animals and cutting them down himself, he could drastically save on his foods costs. The only problem was he didn’t exactly know how to properly break down an animal. He laughed, “My first pig took me four hours. I destroyed it.” Thankfully, it didn’t take nearly as long this time.

After apprenticing with Tuscany’s famed Master Butcher Dario Cecchini, Gaetano learned the craft of butchering and put his skills to work in our class. Using a cleaver, he started by detaching the entire head and then turned the pig onto its back to remove the kidneys, leaf lard, and two prized tenderloins. We thinly sliced the tenderloins for pork saltimbocca, gently pounding them into scaloppini, and then quickly searing them with slices of Salumeria Rosi’s house-made prosciutto in a hot skillet.

Next, he split the pig using a knife and handsaw between the fifth and sixth rib bones, which is the common method for European butchers. “American butchers generally cut between the fourth and fifth ribs, as it will give you a bigger center loin cut and more chops. But I prefer the European method, which gives you more meat on the shoulder and yields a longer coppa.”

After splitting the ribs, Gaetano cut out and butterflied the loin for a decadent roast. We seasoned both sides with salt, pepper, fresh rosemary and fennel pollen (which Gaetano used to collect by hand from fennel plants while in Tuscany), and placed several slices of prosciutto over the meat.

Gaetano, showing off his skills with butcher’s knots, tied the roast into a gorgeous roulade. He said, “With larger loins, I like to put freshly ground sausage on top of the prosciutto. The fat from the sausage helps keep the roast incredibly moist.” He then broke down the ribs into individual bone-in chops, which we seared and finished in a hot oven. After separating the loin from the belly, we formed into groups to further break down and de-bone the two shoulders and two legs.

Unfortunately, there was not enough time to cook the pork belly (one of my favorite cuts — second only to the jowl), which instead was wrapped and taken to ICE’s stewarding department for another use. Gaetano finished the class by removing the skin, snout and ears included, from the head in one piece. “Now for a real treat,” he said, holding the skull, “you can remove the brain. It scrambles deliciously just like eggs. Makes for a great breakfast!”

Despite his gastronomic suggestion, we opted to leave the brain aside and instead sat down to a family style meal of delicious pork. There’s only so much you can do with 170 pounds of pork in four hours, so we are looking very forward to having Gaetano back at ICE this summer, July 21-22, for a two-day butchering workshop!