ICE alum Genna Gold (Culinary, '18) won’t back down from a challenge. Motivated, confident and driven, this Angeleno prides herself on determination to become better at her craft every day. From lead paella cook at Otoño to lead prep cook at Destroyer to starting a catering business amid the pandemic, Genna always kept her eyes set on the prize.

Although Genna has found her true calling in the culinary industry, she admits it didn’t come to her immediately. "Right after high school, I went to art school in San Francisco, and I quickly learned that having a passion and having an actual career are very different. It was just very obvious that art was a hobby for me. My roommates are currently working at Disney as animators," she says. "I had to take a deep look and reevaluate." This led Genna to her next venture studying journalism at a community college.

"From there, I spent a few years as the news editor for the college newspaper, then worked up to editor in chief of the magazine," she says. She became one of the editors for the CSUN newspaper after graduating and then took on some freelance work. However, Genna had another critical realization: "Amid the political climate at the time, I just felt that it wasn’t my cup of tea." She then turned to another one of her passions: cooking.

"As a writer, I had a lot of books lying around, and I looked at my library and realized that 98% of my books were cookbooks," she exclaims. Instantly a light went off in Genna’s head. "I looked at myself and said, 'If you do this in your spare time for fun, wouldn’t you want to make this your career?'" The next day Genna enrolled in Culinary Arts at the Institute of Culinary Education and joined the first-ever class at the newly opened Los Angeles campus. 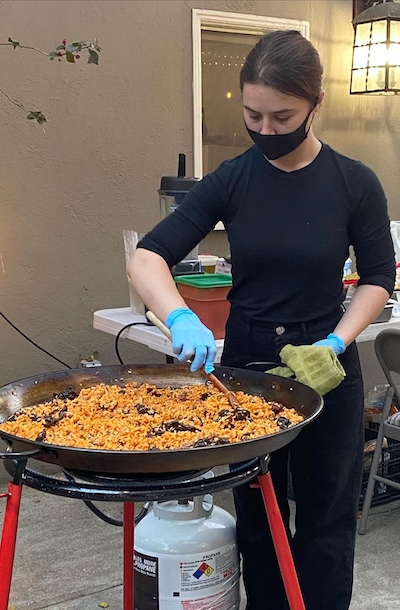 After completing on-campus lessons, Genna started her externship at a Mexican restaurant in Pasadena called Maestro, followed by a couple of other restaurant gigs, which ultimately led her to Teresa Montaño’s Otoño in Highland Park, California. Genna stayed at the Spanish-inspired restaurant for two years, where she worked her way up from garde manger to lead paella cook and lead catering paella cook. Unfortunately, once the pandemic hit, the restaurant was forced to close its doors.

Scouting for a new workplace, Genna landed a position as the lead prep cook at Chef Jordan Kahn’s Michelin Guide-recommended Destroyer in Culver City, California. To challenge herself even further, Genna decided to launch her own catering business during her off-hours, featuring her profound love for paella and Spanish cuisine.

Genna comments that finding a balance between all of her responsibilities proves challenging at times. Recently she noted that she began to hit a wall. It wasn’t until she received some encouraging words from her father that she could get past the hurdle and continue on the grind. Genna notes that she’s thankful for the opportunity to continue to work at a prestigious restaurant that allows her to acquire the necessary skills and experiences to better her private ventures one day.

She notes that one of her greatest inspirations in the industry is Dominique Crenn, who she calls a "beacon of light for women in the industry." She admires her ability to keep pushing through strife and "setting an example for what this industry is really all about." Genna says she would love to work for her one day. "I’ve never heard one bad thing about her; she’s absolutely phenomenal."

Along with what she’s learned at the restaurants and from leaders in the industry, Genna says, "I got my bearings at culinary school. If I had just walked straight onto the line at a professional kitchen, I would’ve been a really small fish in a big freaking ocean!" Through her schooling, Genna notes that she learned essential skills like keeping your composure under pressure, timing and kitchen terminology — which have proven critical on the line.

Fortunately for Genna, cooking skills weren’t the only thing she gained from her time at culinary school. She also met her boyfriend, classmate Nick Huddleston (Culinary, ‘18), while at ICE. The pair now collaborates, operating Genna’s private catering business that focuses on Spanish-inspired cuisine. She feels comfortable and skilled at making it and says that Spanish cuisine is a guaranteed crowdpleaser among her clients. The Los Angeles-based catering company accommodates dietary restrictions and can host parties of 8 to 40 people. For more information, Genna is available via Instagram @gennacooks.