The Pastry & Baking Arts program covers contemporary cakes during the final course when students create three-tier cakes and put their personal spins on the latest cake decorating trends, from fault lines and geodes to the ombre effect.

Ever since ombre cakes became fashionable, the colorful trend has filled inspiration boards on Pinterest and flooded foodies' social media feeds. While the ombre hair trend emerged in the early part of the last decade, the fabric dying technique dates back to the mid-19th century. Derived from the French verb ombrer, ombre translates to “shadow” and “shading” and is exactly that: a technique that gives the appearance of one color hue fading into the next, from dark to light.

It’s a useful skill to have in your toolbox for advanced cake decoration. “As in nature, like when you look at a leaf, we don’t just see one straight color – we see shades of a color,” Pastry & Baking Arts Chef-Instructor Norma Salazar explains. “Colors on a cake should not just be straight out of a bottle.”

Students determine what color they are each going to work with to create a dark, medium and light layer. “We use gel color as we noticed if we use food coloring with a high-end acid, the cake doesn’t bake properly — it comes out raw in the center and alters the appearance of the cake, it almost looks burnt,” Chef Norma says. 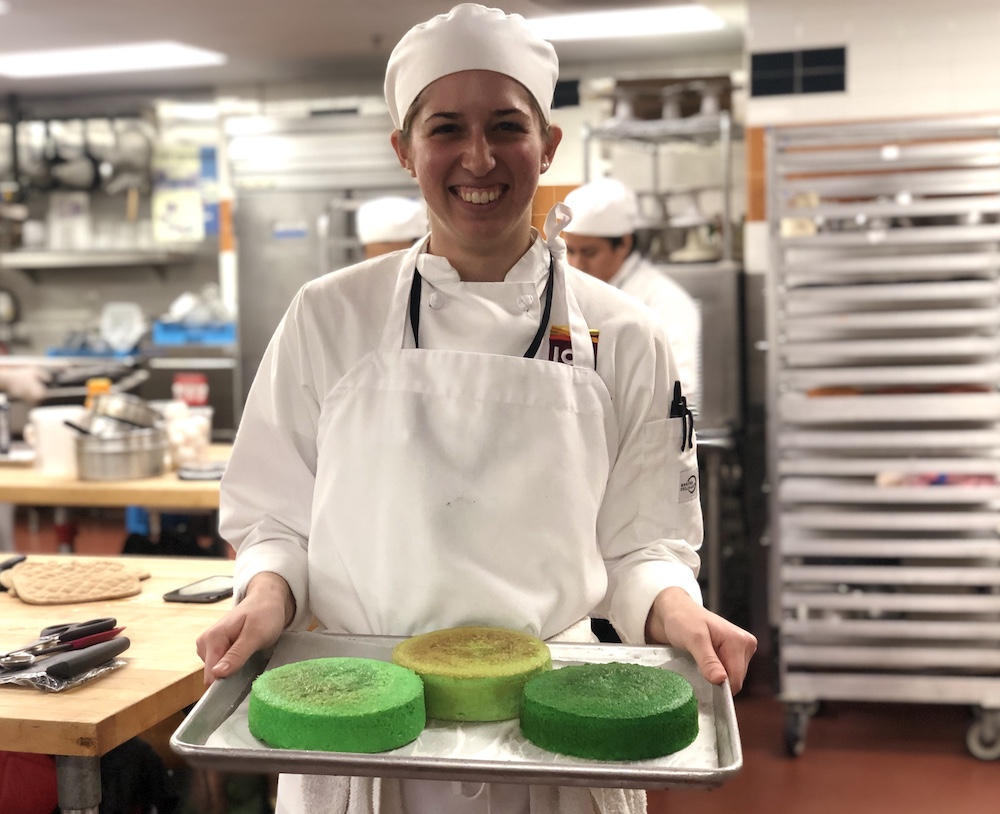 Each student begins by preparing a classic butter cake recipe and divides their batter equally into three bowls. Next, they add their chosen color to each bowl of batter, creating one more intense, one medium and the last one more restrained for the lightest shade. After they bake in 6-inch cake pans to doneness, the cakes are chilled overnight. “It is easier for the assembly,” Chef Norma explains. “If we let it sit unrefrigerated, the cake might be too warm and melt the buttercream. We want the cake to be nice and cold.” The stiffness is also important for the structure, as the three-layer cake ends up being 10-12 inches high.

Once the cakes are baked and chilled, the buttercream is prepared. “We use Italian buttercream by first making an Italian meringue, whipping egg whites and cooking sugar to 240 F, adding butter and vanilla for flavoring,” Chef Norma says. The students then re-create the process, the same as they had with the batter, and divide the buttercream equally into three bowls, then color to match the cake shades — dark, medium and light. 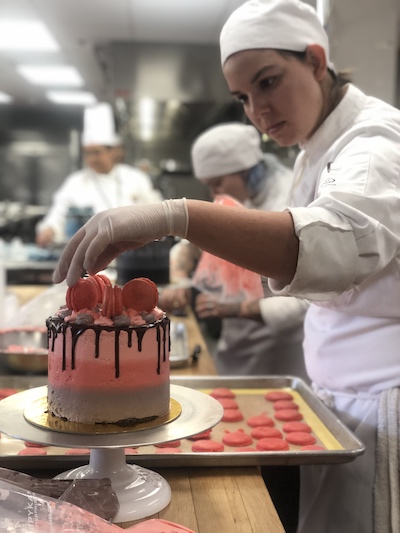 To create the shading effect, students use a bench scraper or metal spatula to "help bring the color together and blend until it is nice and smooth,” Chef Norma says. “That way the cake is not three distinct colors.”

Finally, the students create a drip effect by applying a chocolate glaze (made with chocolate, butter and corn syrup) with a pastry bag. “We let it look like it all melted together,” she says. The students then decorate the top layer with monochromatic macarons filled with the same buttercream.

There is no one way to approach this lesson, as students use their imaginations. “I’ve seen students create sunsets — reddish to orange to yellow. Of course, festive holiday cakes for Christmas, Halloween and Easter are always fun,” Chef Norma says, suggesting shades of red or pink for Valentine’s Day.

Chef Norma adds that the technique elicits joy “to see the smile on the students’ faces and hear that they took it home to family and friends and received positive comments,” she says.

Celebrate New Year’s with a Croquembouche