The average career of a football player is only said to be a little more than three years. So what is a player to do after his days on the gridiron are over? Many want to open a restaurant and some even want to open their own hotel. With all that in mind the Institute of Culinary Education (ICE) hosted 21 current and former professional football players for a NFL Hospitality and Culinary Management Workshop.

On May 6th the players (and some of their wives) gathered to learn from the best in the business. Steve Zagor, the dean of ICE’s Business Management programs led the all-day program. Zagor says "it was a great opportunity to give NFL players a preview into life after  their pro football careers, as a restaurant owner or investor/operator in the hospitality world.”

Current players including Jason Avant (Eagles), Terrence McGee (free agent) and David Caldwell (Giants) and Jahri Evans (Saints) took part. Five of the participants were past Pro Bowl level players. Chef-Instructor Chad Pagano led one of the demonstrations for the players and said they were like “kids in a candy store. I was truly amazed by their level of participation. The quality of their questions was extraordinary.”

ICE culinary instructors, including Vin McCann, Kate Edwards, Anthony Caporale, Ted Siegel and others, all experts in their respective fields, gave the players a taste of what diploma students at ICE learn.  Overall, the focus was more on the business and management side of restaurants including location, leasing, concept development, marketing, customer service, catering, controlling food costs, and how to be profitable.

Part of ICE’s management program offers a steady stream of guest speakers and experts. NFL day was no exception. President and CEO of Rosa Mexicano, Howard Greenstone, was one of the keynote speakers. Greenstone entertained and educated the players with anecdotes from his long career path which has lead to the present, where he runs a 16-unit national restaurant group with over $75 million in revenue.

In the morning, the group briefly heard from Rick Smilow, ICE’s President / CEO since 1995. As an entrepreneur with broad insight into restaurants and other businesses, Smilow made the point “ that while certainly opening and running a successful restaurant was a challenge, it is still the type of enterprise where one can walk-the-floor and control.

That contrasts with so many other types of businesses, where your business success or failure is so dependent on factors you cannot control.” Some of these players were also interested to hear what it takes to run a hotel or lodging establishment. This is the focus of ICE’s newest diploma program, Hospitality Management. The guest speaker for this segment of the day was John Moser, Chief Marketing Officer for the 15-unit Denihan Hospitality Group.

ICE Chef-Instructor James Briscione says he was impressed with the passion and excitement from the players over the course of the day. He commented that “their passion and questions would make one think they were full-time students here.”  Briscione also thinks the players have what it takes to succeed in this growing industry, “they are used to long, hard hours. They aren’t afraid to work hard, and on top of that, they know about team-work.”

For the NFL, this day at ICE was part of a bigger initiative to offer current and past players insight into career options after football.  Past workshops have been in other fields including real estate, acting and broadcast/media.

After the program, players filled out evaluations on their day at ICE. One participant wrote: “The program literally has turned my perspective and approach as to how I will invest and run my business. The course gets an A+ !” 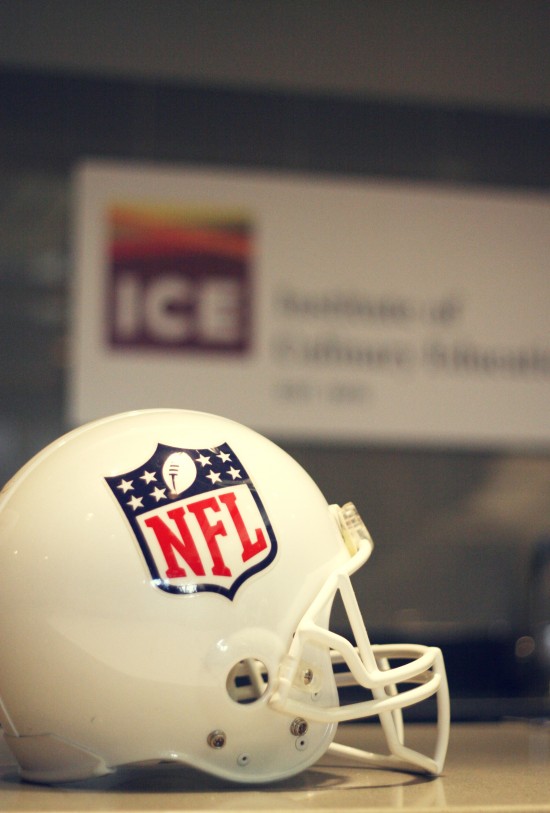