The Odeon. Balthazar. Per Se. Le Cirque. When it comes to life behind the scenes at New York City’s highest temples of gastronomy, Kate Edwards has seen and done it all. 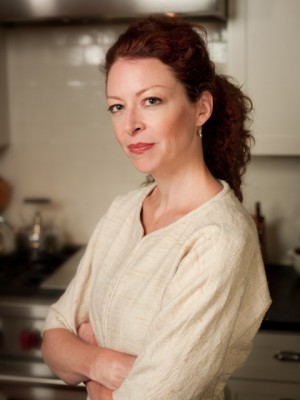 Today, she’s sharing nearly 30 years of restaurant experience — from serving celebrities to delivering expert industry advice as a restaurant consultant — with Culinary Management students at ICE. Before Kate was recruited by Manhattan’s hottest restaurateurs for her impeccable sense of service and savvy staff training strategy, she was simply a college graduate seeking to start a career in music and theater. “In theater, you study a little bit of everything,” Kate explains, “which planted the seed of being a multitasker and defined the way my mind works.”

Her first job in the city was waitressing at The Odeon — the see-and-be-seen brasserie of 1980s New York — which opened her eyes to other possibilities in the industry and helped her land a job as hostess at Brian McNally’s Royalton Hotel. After a few months serving such regulars as Anna Wintour and Madonna, Kate had learned the ins and outs of how to seat a room, plan a menu and manage the wishes of high profile guests.

“Relationships with restaurant guests last," she says. "You’ll see them again and again over the course of your career. It’s something I’m incredibly fond of.” Soon enough, she was promoted to maitre d’ — a mark on her resume that thenceforth served as a professional passport to roles at the city’s best restaurants. In 1997, Kate joined the team at Keith McNally’s new hot spot, Balthazar, just two weeks after opening to unprecedented buzz and acclaim. Having missed the professional training that benefitted the rest of the staff, Kate became acutely aware of the specific requirements of successful staff training — the area of restaurant management that ranks as her primary specialty today. Meanwhile, Kate had developed a foothold in the music industry as a jazz and R&B singer, but at Balthazar, she realized that working in restaurants was no longer a way to support her musical ambitions — it had become her career.

Kate eventually decided to trade in her two-career lifestyle and applied for a management job at one of the city’s most ambitious fine dining establishments: Per Se. Just five days after opening, the hotly anticipated restaurant was closed due to a fire, and Kate was brought on to help facilitate the postponed reopening. It was a time that Kate remembers acutely, a transition from “the Maitre D’iva” at Balthazar to the new kid, all amongst the stress of a highly-anticipated restaurant whose momentum had come to a screeching halt. “You learn the most when you’re struggling just to make it to the next day,” Kate explains. Per Se was one of the wildest rides of Kate’s career, a more-than-full-time gig that took up every waking second. So after two years, Kate took a step back — both to plan her wedding and to reconsider her next move. Her inspiration came during a stint at Chef Geoffrey Zakarian’s Town Restaurant, while working in management alongside a group of consultants. She realized there, that with all her varied roles and experiences, she had more than a lifetime’s worth of restaurant wisdom to offer.

Her first consulting opportunity came from the newly relocated Le Cirque — which meant Kate would be working alongside New York City’s most legendary maitre d’, Sirio Maccioni. At Le Cirque, Kate’s role was to absorb 30 years of accrued, anecdotal excellence and standardize procedures for a brand new staff. Reflecting on the specific challenges of the experience, Kate reflects, “Always listen to your team. They see things from a different perspective — and can help you do your job. Especially when it comes to the quality of your service and your product.” Since then, Kate has worked with an impressive list of diverse clients, from Chef’s Table at Brooklyn Fare and Il Buco to Haven’s Kitchen and the Plaza Hotel. She notes that the “ultimate compliment” has been receiving multiple contracts from the same clients — a testament to her dedication and talent.

Over the past seven years, in addition to growing her consulting business, Kate has served as a guest lecturer and lead instructor in ICE's Culinary Management program, helping students reach the next level in their own dynamic careers. “Teaching challenges what you know,” Kate adds. “People come from different walks of life and really open your mind.” Reflecting on her own winding, dynamic career path, Kate shared some of the advice she gives to Culinary Management students regarding their professional development: “Look for diverse, challenging experiences in your career. People tend to comment on how ‘calm’ I seem for this business. But once you’ve tackled the high volume of Balthazar and the high expectations of Per Se, you become a real professional and learn to hold yourself with a certain degree of poise.”