When we think about international cuisine, it's usually on the level of countries: French, Italian, Chinese, American, etc. Yet within each culinary culture, there are regional variations—from coastal seafood to hearty cold weather fare, poverty-inspired vegetable dishes to luxurious desserts. 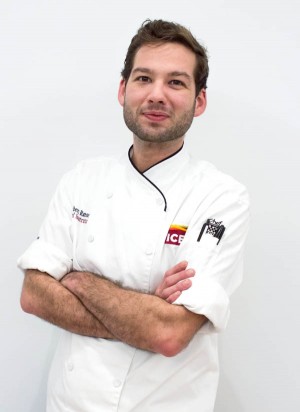 Like many Americans, ICE Chef Instructor Robert Ramsey rarely thought about the history of the food he ate during childhood. But when his mother insisted he take a summer job at a friend’s restaurant, his admiration for the line cooks planted a seed that sprouted into a dynamic career in regional American and international cuisine.

First, Robert took the road most traveled: he went to college. Initially studying sculpture and graphic design, he continued to work part-time in local restaurants. About three years into his studies, Robert took his first position as a line cook in a fine dining restaurant—and that’s when everything changed.

“The restaurant was called Limani Grill in Richmond, Virginia, and the chef was my first culinary mentor,” Robert explains. “He was a culinary school grad, and he saw that I wasn’t passionate about what I was studying in college. So he pushed me to take the time and invest it in culinary school.”

Robert left college, enrolled in a full-time culinary program in Virginia and started externing at a high-end catering operation that served the governor’s office and other major government events. There, he learned about The Jefferson Hotel, home to the most prestigious kitchen in Richmond.

Soon enough, Robert had joined the staff at the famed hotel and, over his three years in the Jefferson’s kitchen, cooked alongside countless other influential chefs—including Sean Brock, James Beard award-winner and chef/owner of Charleston’s Husk. The cuisine at The Jefferson was upscale American with a French influence, but it was a rare Southern dish that caught Robert’s attention.

“There was this peanut soup that I absolutely hated, and I wondered, ‘Why on earth are we serving this?’” Soon enough, Robert’s peanut soup research turned into an in-depth investigation of the history of Southern cuisine, from Lowcountry to Appalachian.

“I realized that there was so much more to learn about Southern cuisine—the cuisine that came out of slave culture, plantations and poor mountain regions,” says Robert. “And for that, the best place to work was Blackberry Farm in Tennessee.”

Set on a 4,200-acre estate near the Great Smoky Mountains, Blackberry Farm is a three-time James Beard Award-winning restaurant. From on-site cheese caves to dedicated preservation and charcuterie facilities, it truly is a haven for those interested in farm-to-table cooking. There, Robert earned the rank of chef de partie and began to take notice of his natural talent for teaching: “At Blackberry Farm, we had periodic reviews, and the owners always noted that I was particularly good at passing down information to the younger chefs. Getting that objective feedback planted teaching in my mind as a possibility for the future.”

Before Robert joined the faculty at ICE, he first had to find his way to New York City. Robert arrived in Brooklyn in 2012, following an introduction to Hugue Dufour of M. Wells Steakhouse through one of his Blackberry Farm colleagues. At the time, Hugue’s restaurant was still under construction, so Robert was introduced to Anna Klinger, the chef behind one of Brooklyn’s most beloved Italian restaurants: al di la Trattoria. Anna was actively looking to open a spinoff restaurant, Bar Corvo, and hired Robert as sous chef.

“What I loved about working with Anna was that she was really passionate about regional cooking—Venetian and northern Italian cooking in particular,” explains Robert. “If we did any other type of Italian food, she made sure to note it on the menu and educate the consumers about what we were doing.” His time at Bar Corvo expanded Robert’s interest from traditional Southern cuisine to the microregional aspects of all international cuisines—and today, teaching the international cooking lessons at ICE remains his favorite part of the curriculum.

After eight years in restaurant kitchens, Robert earned the rank of chef de cuisine at Bar Corvo. But he realized that running an independent restaurant involves more business and people management than hands-on time in the kitchen. That’s when Robert began investigating opportunities outside of restaurants, from graduate programs in food culture to teaching cooking classes.

In the end, it was one of Robert’s own culinary school instructors who inspired him to take the leap. “I emailed one of my instructors out of the blue to ask about his experience teaching, and he responded that it was such a rewarding career—even after 20 years.”

Since joining ICE’s faculty in March of 2015, Robert has focused not only on developing students’ culinary knowledge, but also the life skills they need to succeed in restaurant kitchens: “Being a chef isn’t just about cooking. You need to learn professionalism, time management and the ability to work with other people. It’s a dynamic and challenging industry—you need to be committed and willing to develop yourself as a human, not just as a cook.”

Want to meet our instructors in person? Click here to schedule a tour of ICE.