The gold medal-winning pastry chef emanates kindness as an educator.

There is no (sugar-filled) challenge too great for Pastry & Baking Arts Chef-Instructor Norma Salazar. Case in point: Prior to joining ICE, the classically trained, foundationally French chef was recruited to run an eggless bakery.

"I was scared since my entire background is eggs and butter!" she says. Through hours of research and months of recipe testing, however, she made it work. The concept that she was initially intimidated by soon earned local recognition and a devoted following. A result that Chef Norma should not have found too surprising as she is accustomed to earning accolades.

After a childhood spent in Long Beach, California, where she was her mother’s sidekick in the kitchen, Chef Norma began dabbling in her own creations. "I started making holiday bake-off cookies and cakes. My mom was a big influence," Chef Norma says. In 1989, after completing her associate of arts at Long Beach College, she began her decades-long career in pastry at the Hyatt Regency in Long Beach. There, she worked the early morning bake-off, which meant finishing hundreds of danishes and croissants for guests of the 531-room, 4 Diamond Award-winning hotel. 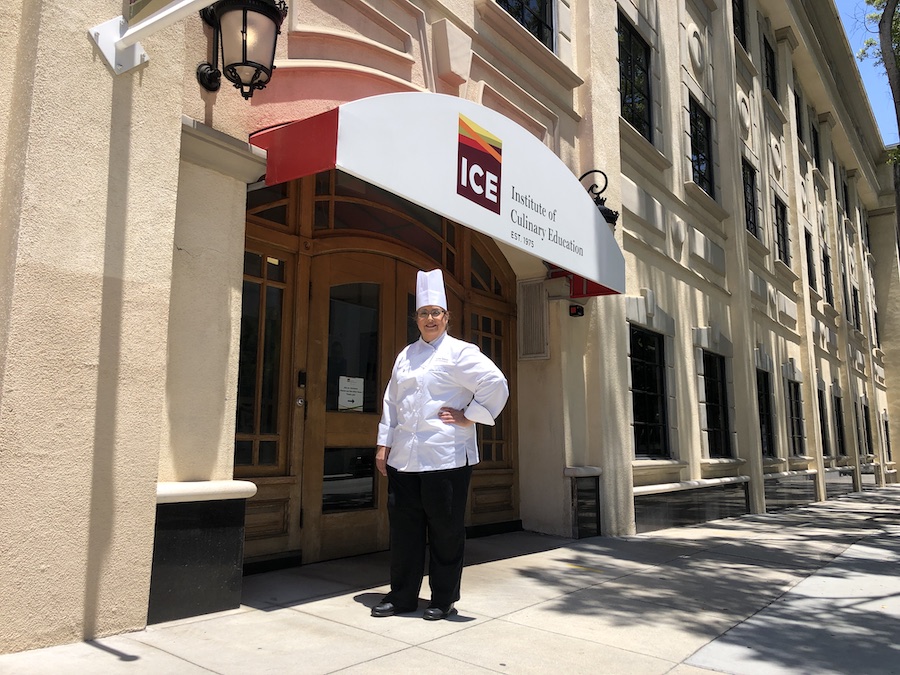 From the Hyatt, she moved on to the Queen Mary’s Sir Winston restaurant after the chef de cuisine, who was also a chef-instructor, offered her a position to prepare hot souffles to order, which were finished elegantly, tableside. At the busy restaurant, Chef Norma got deeper into volume production and eventually, her position grew. A few years later she became the pastry chef of the restaurant, managing a staff of seven. It was there, at the Queen Mary, that she was first exposed to culinary competitions, which began her quest for gold.

Curious about Executive Chef Larry Banares’s involvement on the Olympic team, Chef Norma asked if she could observe as he coached a fellow pastry chef. She even offered to volunteer to wash dishes to get a chance to soak in his training. To her surprise, Chef Larry declined her offer and instead said he wanted her to compete.

"I wound up winning best in show, best junior competitor and best centerpiece theme, which was Phantom of the Opera," Chef Norma says proudly. Every four years, the Culinary Olympics are held in Berlin, where Chef Norma traveled as part of team USA. "We’d compete with chefs from all over the world where the winners received medals and awards," Chef Norma explains. In 1996, she was part of a team that ranked fifth overall out of 300 teams — "and I won the gold medal," she adds.

The competition not only challenged Chef Norma, and others, to create stunning and innovative works, but being a part of the games extended her network. "I was able to meet people, create lifelong friends from chefs and mentors, and I had a great opportunity to coach others," she says. In fact, it was one of her USA teammates that led her to what would become her lifelong career: culinary education.

Though the trophy is not as tangible, teaching has been equally rewarding for Chef Norma. "To see the students’ eyes light up when they have success — whether it is a wedding cake or a chocolate centerpiece — it makes me so proud," Chef Norma says. "I had great instructors, and I just want to be able to share that with them, too."

The gold-medal winner’s greatest achievement is the education she imparts. Her style of teaching is well known to be encouraging and supportive. She advises her students to always be professional, courteous and passionate about the work. "I feel tender-hearted compassion with the students and try to work with them on a one-on-one basis," she says. "Teaching is obviously different for every student, they all come with a different package and we have to open it slowly and turn them into the best, most beautiful gift in this industry that we can offer."

Her favorite lessons to teach are the early part of the program, when she says students are wide-eyed and eager to dive in. "It’s exciting to teach this new field to them, the beginner courses with the sciences of sugar, the chocolate and all the baking ingredients." She adds that she loves teaching bread because it is very hands-on and there is great satisfaction from all the hard work. After 30 years in the industry, there really isn’t an area of baking that Chef Norma is not excited to teach. Above all else, she wants students to feel like they have the same kind of mentor in her that she has had in her own career.

"They can count on me wherever they are," she says. "I am always there for them. I have been so fortunate to meet incredible people throughout my journey, and I hope my students will do the same."