The Magic of Corn Tortillas

Despite growing up eating packaged tortillas, “Eat Mexico” author Lesley Tellez has become a corn tortilla evangelist. Recently, she shared the history and magic behind authentic, corn tortillas with ICE students at a virtual event.

A third-generation Mexican American, born and raised in Southern California, Lesley set out to learn more about her heritage when she moved to Mexico City in 2009. There, she attended a gastronomy program at Escuela de Gastronomía Mexicana, where she studied from-scratch tortillas using the kernel (and how to make bean-to-bar chocolate, among other topics). “I grew up eating corn tortillas from the package,” she told students. “These are tortillas that are overwhelmingly sold in the U.S.” She described one brand in particular as coming in a “congealed stack.” While Lesley sees the value and accessibility in commercial tortillas, she says that besides lacking in structure and aroma, the biggest con is that they don’t taste good. “They don’t smell fresh, they stick together, and depending on what you are using them for, they tend to fall apart,” she lamented. However, these tortillas are what the vast majority of people eat. 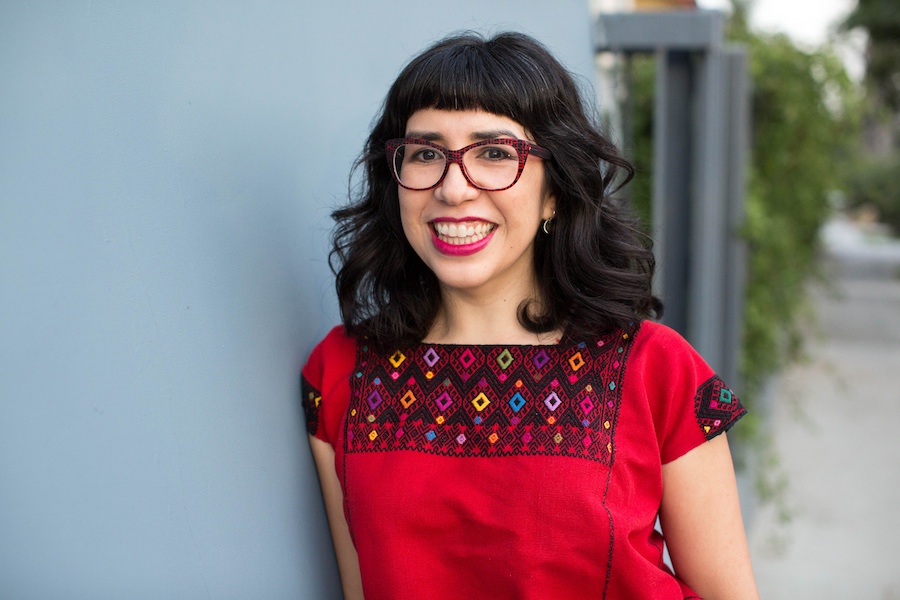 Now a handmade tortilla convert, Lesley shared the description of the scenes she observed in Mexico City when she first discovered a true tortilla with its brown, freckled marks: “Women grabbed hunks of masa, rolling them into a ball and pressing them down in the heavy tortilla press,” she shared. “Then opened it up, laying it gently, watching the bubbles appear and smelling this toasted corn smell. I thought, this is amazing — this is a corn tortilla!” It became important for her to learn about the process and share its history, which led to authoring, “Eat Mexico: Recipes from Mexico City’s Streets, Markets and Fondas,” which was published in 2015.

According to Lesley, corn was first domesticated in Central Mexico and dates back to 3000-2500 B.C. “Farmers over the course of thousands of years saved the biggest kernels and planted those,” she explained. “We end up with the modern ear of corn. Corn didn’t just appear, humans created it by seed saving.” In Mexico, there are almost 60 varieties of native corn, which come in many colors. “Sometimes you even see multiple shades on a single cob,” Lesley said. And every part of the corn is used, from the cob to the silk to the kernel.

“Corn forms the foundation of the Mexican diet, and the corn tortilla is a foundational food,” Lesley explained. There is no oil, lard or salt in a traditional corn tortilla. There are just two ingredients: masa harina — corn flour made with alkaline solution, which is calcium hydroxide known as cal — and water.

The process of making the masa contains the magic, known as nixtamalization. The first step is drying the corn on the stalk: “They put a tarp down with ears of corn, and the sun helps dry them out,” Lesley said. Next, the corn kernels are removed and stored. Then, the kernels are added to a pot of water with the cal. “The corn will immediately change color — the cal will turn everything a shade darker.” The corn cooks in the solution for 30 minutes to one hour. The length depends on the quantity of corn and the type of corn. After it is done, it is covered to sit for several hours or overnight, and then the corn is rinsed and ready to be ground into masa. “This process of treating corn in the alkaline solution is the nixtamalization.”

Nixtamalizing the masa is the key to a successful tortilla. “This key chemical reaction unlocks nutrients in the corn kernel that are not available unless you do this process,” Lesley explained. “Once you nixtamliaze corn, it increases the amount of niacin to be absorbed into the body.” When Spain conquered Mexico, the soldiers left with corn, but they didn't bring this process. “Nixtamalization stayed in the Old World, so you would see peasant farmers in Europe who had vitamin deficiencies because they were eating corn as it was.” In addition to niacin, nixtamalization adds soluble fiber and calcium. “It also makes the tortillas flexible, pliable and stretchy,” Lesley said. “It acts as a natural preservative, which means you can keep the tortillas in your refrigerator or freeze them.”

In recent years, there has been a revival of artisanal methods and a rediscovery of the heirloom corn grown in Mexico. Though with only a few ingredients, making corn tortillas the traditional way is not a simple task. “Ratios of water and cal vary, the weather plays a factor, it may have to do with how cool or hot it is in your kitchen,” Lesley detailed. “The [Mexican] women are the masters and they have been doing this for decades, but it’s not an easy thing to learn."

Luckily, there is a corn tortilla revival as people on both sides of the border are making the specialty the traditional way: with the proper nixtamalization, which is the key to this magical staple of Mexican cuisine.

Make your own corn tortillas from scratch in ICE's Culinary Arts program.