Though already a chef de cuisine in a professional kitchen at age 18, Shant Halajian (Culinary, '19) knew he needed to further his education to achieve his lifelong goal of working in a world-class kitchen. He chose to pursue a Culinary Arts diploma at the Institute of Culinary Education, which led to an externship at the prestigious French Laundry and a role as executive chef inside The Glenmark, a Tribute Portfolio Hotel.

Born in Aleppo, Syria, Shant has long had professional chef ambitions. Shant recalls watching his mother hosting friends for celebrations and preparing elaborate meals for hours. “The aromas my mom created would fill the house,” he says. “That got me thinking from an early age, I wanted to cook professionally, not just as a hobby.” At 10-years-old, Shant left Aleppo (before the country’s civil war) and settled in Los Angeles. He returned to his birth country in the late 2000s, and during summers he would help out at a restaurant owned by one of his father’s friends. Though he couldn’t even reach the countertops, he’d chop onions and observe the inner workings of the operation. “I didn’t have a set schedule, but I would just show up,” Shant explains. Dedicated to the craft, he returned to LA at age 16 and began “chasing” the industry professionally. 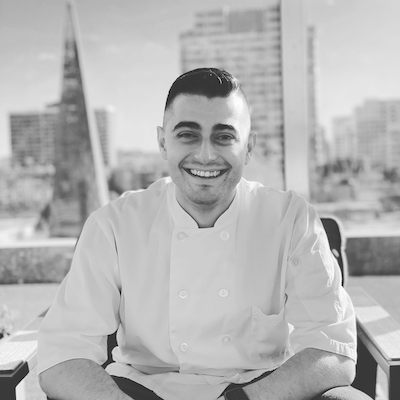 Shant started with an entry-level position as a dishwasher at Carousel, a beloved homestyle restaurant serving authentic Middle Eastern cuisine. His go-getter attitude did not go unnoticed, as he soon advanced to prep, commis and chef de cuisine throughout two years. He was 18-years-old and wondered if he'd be taken seriously in the industry. As a chef de cuisine for years, Shant had a constant desire to improve upon his professional skills and gain gastronomic techniques.

“After a long day at Carousel, I was scrolling Facebook and found a post from Anthony Bourdain,” Shant says. In it, the culinary school graduate advised his followers to try working in the industry first before investing in a formal education. “I thought, I’ve been doing this for a while now, 300 covers a night. Yes, I’m ready." That pivotal post led Shant to start saving from his paycheck to enroll in the Culinary Arts program at ICE’s Los Angeles campus, and he would continue to lead the kitchen at Carousel at night.

At ICE, Shant fully invested in his studies. “Even after a long day of working and school, I would still go home and research what I was learning,” he says. “Carousel was a beautiful place, but for me to learn molecular gastronomy versus [keeping up with] the daily madness of a restaurant, I didn’t have time there to really learn about those things.” In class during the day, Shant experimented with advanced equipment, practiced contemporary plating and studied a broad range of cuisines. He also forged solid friendships with fellow students and his chef-instructors, including Chef Daniel Rossi, with whom he still keeps in touch.

“ICE really taught me to listen more, to understand other people’s backgrounds to make me a better team player in whatever kitchen I go,” Shant says. That key lesson paid off as he embarked on his two stages. With the help of Senior Career Services Advisor Mallory Rajan and support from Chef Daniel, he flew to New York for his trail at Eleven Madison Park.

“I remember leaving EMP at 1:30 a.m. and texting Mallory, 'I need to call you.' I told her I got the job,” Shant says. Soon after, he headed to The French Laundry in Napa Valley, California, where he absorbed another three-Michelin-starred restaurant's nuances on a trail and said, “the kitchen was magical.” He received offers from both restaurants and chose the latter for his formal externship.

Being from war-torn Syria, Shant has faced many challenges. He's lived far from his mother for long periods of time while hearing first-hand accounts of the devastation and destruction and suffered the loss of friends and family. “It took an emotional toll on me, but it didn’t keep me from chasing my dreams or the goals I set in my life,” Shant says. “I was lucky to experience Syria, so rich in agriculture and spices. I was blessed to have that opportunity.”

At The French Laundry, he was exposed to the bountiful property, and of course, Thomas Keller’s training. “What really got me to fall in love with cooking was learning there and the whole team aspect,” Shant says. He would spend weeks gardening and harvesting what was grown on the property gaining true farm-to-table concept experience. “I took carrots and celery root out of the soil and prepped them for the chefs de partie. I respect the ingredients way more than I ever did in my life." Shant relished learning new things each day with the ever-changing menu. “It was the right timing for me, and ICE was the bridge for me to get to the most amazing restaurants on the planet."

During his initial time off when restaurants closed amid the pandemic, Shant recreated menu items with co-workers and received family meals from Chef Keller, distributed at his casual restaurant Ad Hoc. Then Shant returned to Southern California for a visit.

Home in LA, he came across an opportunity to be the executive chef of the restaurants at The Glenmark, a new Tribute Portfolio hotel on Brand Boulevard. As fate would have it, it was located less than a mile from Carousel on the very same street. “The owner said they had a 5,000-square-foot roof with beautiful views,” Shant says. He requested a few days to consider the opportunity, drove back up to Napa and decided on a 17-mile hike by the Russian River that he would become an opening executive chef at the property.

When the first few weeks were very challenging, Shant reached out to his mentor, Chef Daniel. “I said, 'chef I really need you,'" he recalls. “We created a lot of menu items and brainstormed.” To Shant’s surprise, the lobby-level restaurant, Olia, and the rooftop lounge, Mila, opened successfully with a steady stream of guests in the middle of an unfathomable pandemic. “It felt like a beautiful dream."

His menu boasts wagyu steak with seasonal vegetables and tamari-infused bordelaise; butterflied branzino in beurre blanc with yuzu and saffron; and a 64-ounce tomahawk cooked sous vide and served with the restaurant's bestselling french fries and freshly shaved truffles. Shant's team includes a few fellow ICE grads, as when staffing needs arose, he turned once again to Mallory in Career Services.

Unfortunately, when California imposed a second safer-at-home order, Shant was forced to shut down his restaurants, but when it was lifted, he was excited to reopen both eateries on Feb. 5. “I’m really glad all of the team is back,” Shant says.

“Believe it or not, sometimes I will drive to Carousel and watch that sign turn colors. It humbles me and lets me know where I started,” he divulges. “My philosophy is every stone needs final touches of polishing before you can put it on display. For me, culinary school did that.”

Start your formal education at the Institute of Culinary Education in LA.