Operating a Pop-Up in NYC from Planning to Execution

Pastry & Baking Arts graduate Joy Cho has captured the process of enrolling in evening classes at the Institute of Culinary Education, changing careers, launching at Michelin-starred restaurants and developing her independent business since the shutdown. This month, she shares her experience hosting a pop-up menu at a New York City restaurant.

When I cold-emailed the owner of a New York City bar back in March asking about a potential pop-up opportunity, I never thought that six months later, I would be operating out of the space a few times a week.

Back in February, I launched a small-format ticketed pop-up dinner, borrowing an acquaintance’s apartment to assemble dishes for guests. And I hosted a one-time pop-up at a local brewery while back in Ohio, where I sold (and sold out of) baked goods on a Saturday afternoon. Operating a recurring pop-up in an existing NYC brick-and-mortar establishment, however, was new to me — though my previous experiences gave me some level of preparation.

After returning to NYC, I met with Katie Rue, the owner of Reception Bar on the Lower East Side (LES), to discuss logistics for a pop-up there. Throughout the process, she allowed me the freedom to craft a separate menu and determine what days and hours I would operate. We agreed on a commission structure, and Katie offered guidance on marketing materials, but besides that, there was a ton of space to fill in the blanks.

I decided to start the pop-up with three days a week at Reception, Wednesday through Friday evenings. I would have a standalone menu with two desserts and one savory option and aspire to change up the items on a two-week cadence. 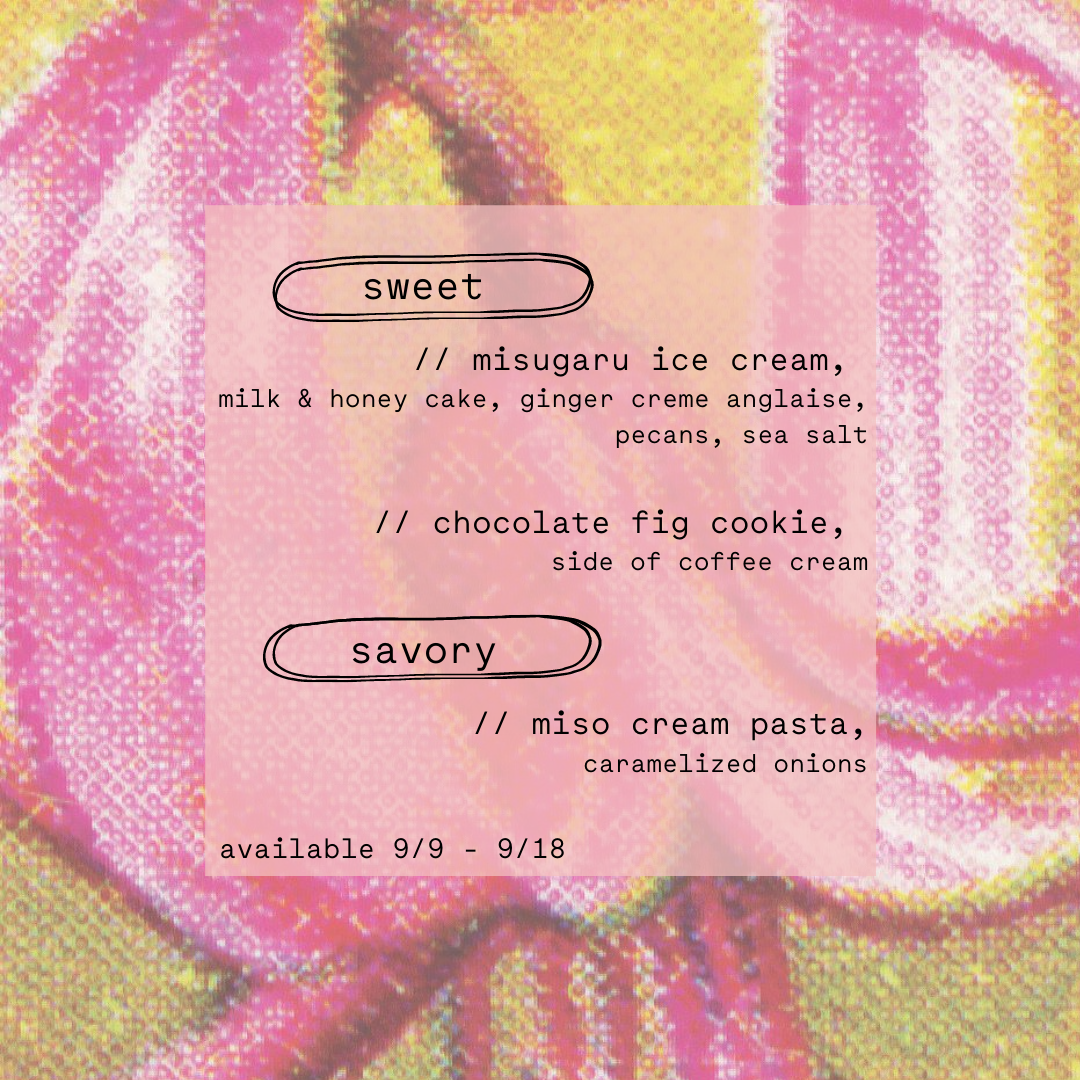 It was important to select menu items that I could pre-make in my Brooklyn apartment and transport to Reception to assemble on site. With limited equipment on-premise (read: no full kitchen), I had to be smart about how to put dishes together efficiently. Thankfully, I had enough fridge and freezer space at Reception to store items in between pop-up days and enough counter space to work on.

After marketing through Instagram (and cross-advertising through Reception’s social media) and lugging all my ingredients and equipment to the LES, I was excited and nervous for pop-up opening day. I would be taking guests’ orders and running plates out to them, so this would be a valuable opportunity to gain face time with customers.

Opening day came and went, and I was surprised by the reception (no pun intended) – the pop-up was picked up by Eater and The Infatuation, and I saw friends, friends of friends and Instagram followers come by for ice cream and pasta. As the days and weeks went by, I also noticed that sales waxed and waned, sometimes due to weather and other times for seemingly random reasons. After two weeks, I changed up the menu, hoping to bring back clientele from the first wave.

I was learning a lot about customer service, workflow, time management and marketing, but a recurring pop-up was a lot to manage, especially for one person. I wasn’t sure how to split my time and effort between my original project — Baker’s Boxes — and this LES pop-up. There were definite pros to maintaining a pop-up, such as press, presence in Manhattan and the ability to try out savory items, but after a month of maintaining and adjusting the set-up, I found that pivoting away from the pop-up and focusing on preordered pastry boxes again was the decision that made the most sense. Given the changing weather, the constraints of time and workload, and the previous success of Baker’s Boxes, it felt right to pour my energy into a project that allowed me more visibility and stability.

Thankfully I’m able to continue partnering with Reception as a pick-up location for Baker’s Boxes and keep an open dialogue about potential one-off pop-ups there moving forward. Through the various challenges and changes I faced while working this pop-up, I feel motivated to approach similar opportunities in the future and to do so with a more defined vision and plan.

As this year has taught so many of us, the unexpected and unplanned happen — frequently. It’s less about meticulously planning for the future than taking opportunities that arise in stride. I’m very grateful for this pop-up experience and look forward to seeing what life hands me next!

Explore your pastry concept with a dual diploma in Pastry & Baking Arts and Restaurant & Culinary Management.