“Before there was talent, there was passion,” says ICE alum and Food Network Star contestant Dom Tesoriero of his path to culinary success. “I was 18 and my friends would just show up at the house with bags of ingredients—I wasn’t skilled, but I knew how to make food taste good.” 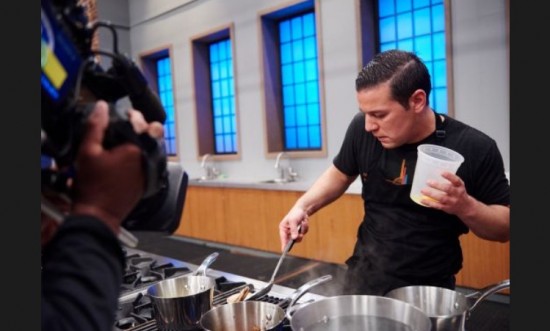 For Dom, the decision to attend culinary school was an impulsive one—but that impulsive quality, the ability to jump when an opportunity arrives, is exactly what landed Dom on Food Network Star. “That’s basically the story of my life. If I feel something and I want to do it, it’s like, ‘Let’s get up and do it!’” Though he may be best known for his Mac Truck—the city’s first macaroni and cheese food truck, launched three years ago—Dom’s culinary training includes stints at some of the city’s finest restaurants and catering companies.

After graduating from ICE, he experienced a baptism by fire with an externship at Little Italy favorite Il Cortile, turning 500-600 covers every Saturday night. From there, he landed a position at boutique Staten Island catering company Framboise, traveling the world to cater such events as the Beijing Olympics.

“Traveling all over the world—especially so young in my career—was not just a great opportunity to learn how to cook and to scale food for huge events,” says Dom. “To be in China for two months and run around and experience that cuisine firsthand…I was learning not just to cook, but to eat and appreciate other cultures. It was such a charmed and a blessed experience.”

The travel bug bit Dom hard, and he eventually left Framboise to pursue training in his favorite cuisine: Italian. “This was eight years after I had graduated from culinary school,” Dom adds, “but I contacted ICE to see if the Career Services department could help me arrange a stage overseas. They connected me with an opportunity in Piedmont that allowed me to travel and work all around Italy. It was amazing that I was able to come back to the school after so much time and have them support that project.”

After months in restaurant kitchens across Italy and prying traditional cooking secrets from local nonnas, Dom returned home to New York where he joined the opening pasta line at Lincoln Ristorante under Chef Jonathan Benno.

“Working with Jonathan was amazing. Previous to Lincoln, he had worked the opening of Per Se—how many chefs can say that they’ve opened a Michelin three-star restaurant? And while a lot of Jonathan’s peers aren’t actually in the kitchen, he’s there, hands on and wants to teach you. He’s really an incredible mentor.”

That immersive experience in pasta provided the fuel for Dom’s entrepreneurial ambitions, and he left the restaurant to develop a freelance pasta and catering concept, extruding fresh pasta in people’s homes.

As with any startup, funds were limited, so when a friend offered Dom the opportunity to spend a summer in Saratoga as a chowder man, he knew it would be a chance to step back and reorganize his strategy. There, he realized his pasta concept could grow into a racetrack concession, and the idea for a macaroni and cheese business was born.

After launching in Saratoga, it came to Dom’s attention that while other cities had mac and cheese food trucks, no one had tackled the market in NYC. Within months of launching, the Mac Truck was receiving incredible press, but the experience was not without its challenges. “I’m not just a chef—I’m a mechanic, a plumber, an electrician, a driver—and I’m fighting for parking, not to mention avoiding tickets. I probably experience more stress just trying to parallel park my 22-foot truck each morning than most people deal with in their entire day.” 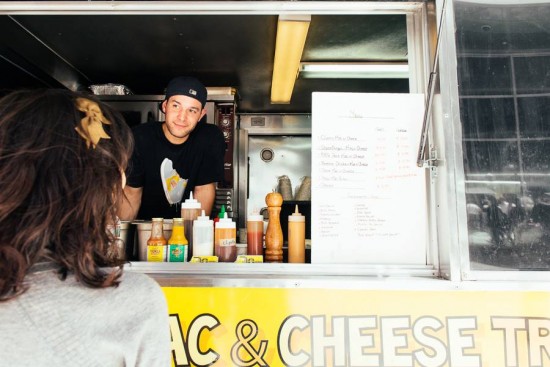 Yet Dom has transformed that stress into a media goldmine. The first request came in the form of a pilot for a show about late night eats, which never aired, but the segment landed in the hands of casting for a show called Rewrapped. That stroke of luck launched Dom’s career in food television, and after winning his segment on Rewrapped he received numerous requests to appear on other shows.

But, being a one-man show at the Mac Truck, Dom knew he couldn’t take more time off unless a remarkable opportunity came up. That opportunity was Food Network Star. “I said to myself, ‘This isn’t just one episode,’” Dom explains. “This is an entire television season! I couldn’t pass that opportunity up—but I knew it would also be a challenge.

On Rewrapped, my hands were sweating, my mind was cluttered and I experienced shortness of breath—just from the experience of everyone staring at me and the pressure of wanting to perform well.” As fans of Food Network Star have witnessed, Dom’s confidence has grown considerably with the support of the seasoned personalities of Bobby Flay and Giada De Laurentiis.

That was the game changer for me—realizing that they saw something in me and they were offering me the chance to improve. After all the late nights, the holidays, etc. that you work in this industry, you wonder if it’s ever going to pay off. So at a certain point when you’re on this giant stage in front of the world, you have to just realize that everything you’ve done up to this point has led you here—and it finally clicks.

So what comes next for Dom? “I would love to see myself on TV in the future! It has been a great experience, and what excites me about this opportunity is not only all the things I could teach people but also being in an environment where I’m continually learning.

I’ve spent the last three years of my life on mac and cheese, but this contest has challenged me to draw on all of my experiences, to do things I haven’t done in years—things I’m not 100% sure I remember how to do anymore. Pulling that off and succeeding—now that’s awesome.”