Demo at ICE with Chef Jonathan Kinsella of Épicerie Boulud

Barely a year after joining Daniel Boulud's restaurant group, Jonathan Kinsella became the Executive Chef at the Épicerie Boulud, an Upper West Side eat-in and take-out market from Daniel Boulud’s The Dinex Group. 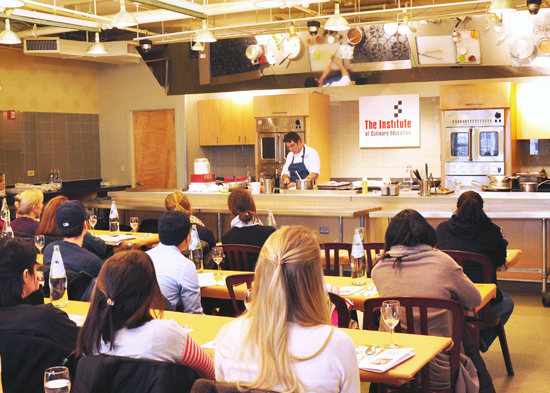 Épicerie Boulud is filled with house-made charcuterie, artisanal cheeses, delicious soups, salads, sandwiches, fresh breads, and pastries. Yesterday, Kinsella came to ICE to speak with students about the flavors and techniques he uses when creating this menu of fast, easy and delicious dishes. For the demo, he made Moroccan Lamb Stew with spicy braised lamb, carrot, zucchini, yellow squash, chickpeas, tomatoes, olives and preserved lemon.

The stew was served with tabouli made with bulgur, mint, cilantro, parsley, lemon and olive oil as well as tzatziki. Kinsella also made a banh mi-inspired sandwich of sausage, cilantro, mint, parsley, tzatziki and harissa ketchup. Kinsella was inspired by his father, who was also a chef, to pursue a career in the culinary arts. In fact, his father is still a chef instructor at

The Midwest Culinary Institute where Jonathan went to school. While Kinsella’s Midwestern roots may not point to Moroccan and Southeast Asian cuisines, he felt that the dish was still honest and true to the hearty foods and dishes he groups up eating. He said, “Never forget where you came from. I always remember by Midwestern roots. On a rainy, crappy Sunday my dad would make a stew.” While going to culinary school in Cincinnati, Chef Kinsella worked at The Maisonette. Upon graduating in 2005, Jonathan went to work as chef de partie at Chicago's Tru. In 2007, the Chicago's Mobile Five Star Peninsula Hotel hired Kinsella as chef de cuisine for their restaurant, bar and room service.

In August 2010, Kinsella joined Bar Boulud as executive sous chef. Not only was it a chance to pick up some new techniques and get advice from one of New York’s rising stars, it was also a chance to learn more about working in kitchens and how to get hired by top restaurants. Mia Rappoport, Assistant Human Resources Director for The Dinex Group, was on hand to discuss career opportunities across Daniel Boulud's culinary empire, including Daniel, Café Boulud, Bar Boulud, DBGB's, Boulud Sud and Épicerie Boulud in New York City as well as other locations in the US and abroad. The students left excited about making new dishes as well as starting new careers in the culinary arts.