Love is in the air in ICE kitchens. It’s not uncommon for friends to attend culinary school together, and it’s not unheard of for couples to meet on campus, but married couples bring their own distinct dynamic to the atmosphere, as anyone sharing a kitchen can imagine. Meet a pair of married students on each coast before they’re collaborating on dining concepts in the future.

The Peñas and the Jones have a lot in common: three of the four have served in the military, both couples have two children, both husbands are studying Culinary Arts, and both wives are studying Pastry & Baking Arts. Coincidentally, all three veterans lived in Wichita, Kansas, before moving to the cities where they are now. Here’s how each couple ended up in culinary school together.

Meet the Peñas in New York

Alicia and Luis Peña have a charming and disarming give and take: he recognizes her developing pastry techniques and she compliments his creativity with flavors when we meet. The couple began dating in Okinawa, Japan, where both veterans were stationed a decade ago. After seven years in the Marines, Luis studied culinary and pastry at the International Culinary Center while Alicia completed 15 years of active duty in the Air Force. Married for nine years, they have two children (ages 5 and 8 — one baker and one taster) and a home bakery called Pinch of Grace Sweets.

From her last station in Kansas, where Luis gained experience as a hospital line cook and restaurant pastry chef, the couple moved to New Jersey (where Luis grew up) to attend the Institute of Culinary Education — Luis in Culinary Arts and Alicia in Pastry & Baking Arts while continuing to serve in the Air Force Reserves on weekends.

With Puerto Rican and Dominican influences, the family has always cooked and baked at home. In addition to previous culinary school and restaurant experience, Luis began classes at ICE first, and now the couple’s on campus every day of the week together.

“You have to be on your best behavior,” Luis jokes about the transition. “It took some time getting used to her being on the scene as well.”

Alicia recalls finding her kitchen reorganized after the first time Luis went to school and the healthy competition that ensued. “I was just cooking for survival, and I started backing away because he knew much more. We’re speaking the same language now and it’s fun.” 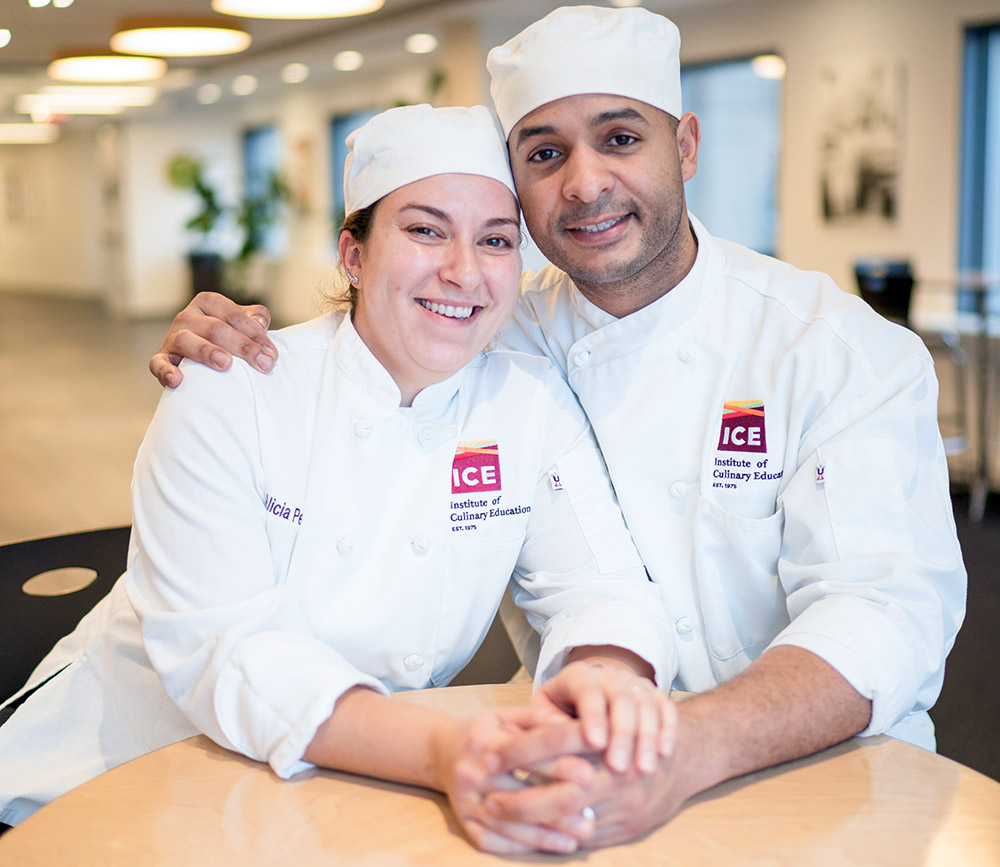 Today, Luis has developed an interest in cuts of meat and braising, while Alicia can make her own creme brulee after testing each restaurant’s variation in the past. Luis says he’s refining and clarifying little things, and Alicia has learned the science and chemistry behind the baking she’s always loved. Both veterans reflect on how their military experience has impacted their work in the kitchen.

“I hold myself to a higher standard, especially coming from the Marines, but it’s helped,” Luis says. “Even though there can be a lot of pressure in the kitchen, I’ve done worse jobs and been to worse places. Maybe I’m attracted to that pressure.”

Alicia agrees. “When it comes to the military background, we’re always striving to do our best in everything, and we work the best under pressure,” she says. “It’s competing against yourself: Can I do better than last time? And it’s helped with patience.”

The couple has restaurants in mind for their externships and dreams of opening their own eatery eventually.

“We came here to pick as many brains as we can and then use that to our advantage to provide extreme, good-quality service to folks that are regular people — a fine-dining feeling at an affordable place,” Luis says.

“After being stationed in so many places and seeing so many things, we know people just want to go to a nice place,” Alicia adds. “You want that New York or Chicago experience in a small town. That’s what we’re going for, plus working with local farms and giving back to our community in any way possible.”

In the meantime, the couple donates pastries to church activities and events, and Alicia reminds Luis what he’s forgotten from pastry school (like how to temper an egg). “We’re keeping each other on track to achieve perfection,” Luis assures me, smiling.

Meet the Jones in Los Angeles

Christina and Mark went to high school together in Chino, California, and their love story began on a blind date when they were in their 20s — unsurprisingly, food has always played a key role. Between jumping in on each other’s sentences and lots of playful laughter, we got to the heart of what brought them to enroll at ICE at the same time and learned of their future plans in food.

Early in the couple’s relationship, the pair used food to foster community. “Whenever there was a barbecue, it was always at my house, and then at our house when we moved in together,” Mark says.

“He would cook and I would organize the menu and make a dessert,” Christina adds. “We were the house where friends from different areas of town would come and hang out.” 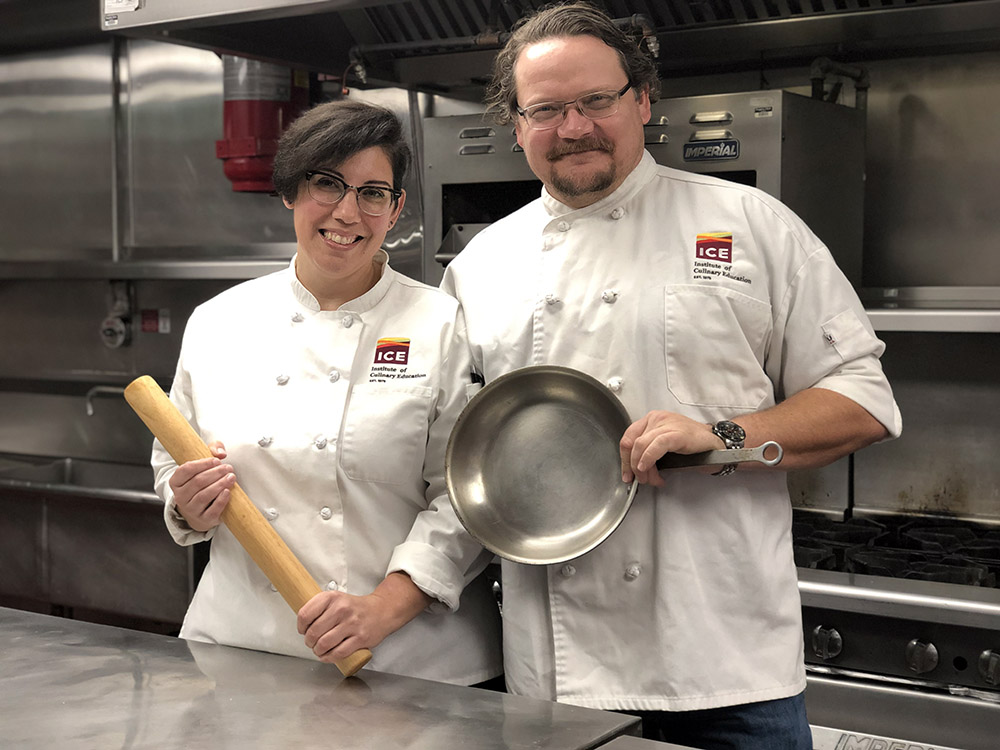 The Jones went on to have children and move around for Mark’s work, which has included four years of active duty in the Navy, service as a peace officer in California and working with at-risk youth in Michigan and Kansas. “I became a stay-at-home mom after a few kids came, and it got to the point where his schedule was so crazy that the time we really got to spend enjoying each other’s company was over cooking,” Christina says.

After a stint in Michigan, the family returned to California to escape cold winters — first Christina and the kids (now 15-year-old Drake and 12-year-old Katherine), then Mark, who’d relocated to work in Wichita for five months when the separation wore on the couple. Burned out on his corporate lifestyle, Mark was inspired to attend culinary school from spending meal time with his kids again. When Christina, who has always loved baking, joined him on a tour of ICE, both concluded: if not now, when?

“We talked about creating a family restaurant, bringing the kids with us and teaching them to work,” Christina says.

“It’s one thing to leave kids a pile of money, but to leave something solid, a functional business — that’s my thought process,” Mark explains. “I’m perfectly content to focus the next 15-20 years on getting that set up for longevity for the family.”

Today, Mark has completed Culinary Arts classes and is on to his externship. Christina is enrolled in the Pastry & Baking Arts and Restaurant & Culinary Management programs for a dual diploma.

“I have an MBA, so I’m excited she is getting to see some of the things I’m familiar with, like multi-million-dollar budgets, but from the culinary perspective,” Mark says.

Going to culinary school together has reignited the couple’s relationship, despite hindering housework. “I am so energized to sit down and chat with him about what went on in class,” Christina says. “It brings a new level of exciting communication to our relationship. After 19 years, it’s not just about the kids.”

Of course, there’s an element of competition. Both students were graded on the same chocolate soufflé with crème anglaise for a pastry practical: Mark got a 91 and Christina got a 99. “Being at home, you start to feel a little unimportant. Not that anyone makes you feel that way other than yourself,” Christina says of being a full-time mom. “Now I actually feel like I can do this.”

Mark takes pride in her success and admits he has a “hate-hate” relationship with pastry. Fortunately, that means the kids get Christina’s desserts. And they’ll each have a job opportunity if Mark and Christina execute the elevated gastropub they’re planning, inspired by the concepts they enjoyed in Michigan. Until then, they’re craving experience with fine dining and high-volume businesses to prepare.

“A year ago we didn’t know if we were going to make the marriage work because we had been apart,” Christina laments. “Now we’re thoroughly enjoying cooking again and having so much more in common again. It’s reinvigorating.”