“One of the goals at the Institute of Culinary Education is to prepare students for chef-driven, aspirational dining,” explains Los Angeles campus President Lachlan Sands. This goal culminates with Course 8 in Culinary Arts: Advanced Cuisine.

During these 60 hours of lessons, students execute recipes inspired by renowned chefs to experience a variety of trends and techniques. Here are a few chefs who inspired dishes featured in the kitchen classroom.

“One of the other big trends we focus on is sustainability and plant-based diets,” President Sands says, referencing a recipe inspired by José Andrés’s fennel bouillabaisse, a completely vegan take on a traditional bouillabaisse. “We teach that dish to demonstrate that you can create truly delicious food that is either vegan or plant-forward."

Puerto Rican-born pastry chef Antonio Bachour’s recipes are featured as part of Contemporary Plated Desserts. “Each day has a theme to ensure that people are learning specific things,” President Sands says. “There are many molecular gastronomy techniques that are used in industry and a few of those are in this particular dish from Chef Antonio.” Students make his lemon curd pistachio foam cake and green apple sorbet with powdered glucose and sorbet stabilizer, which gives it that ice cream-style texture and mouthfeel. “Most people think sorbet is predominantly juice-based or water-based, but by putting the stabilizer in there, you’re really getting a much creamier consistency,” President Sands explains, adding that the dish has a visual appeal. “Chef Antonio has an artistic eye. His creations are spectacular.”

One of the most famous Italian chefs created one of the most famous desserts: Oops, I Dropped the Lemon Tart. “It is a whimsical and funny dish that is supposed to be plated as if you dropped it from a very great height,” President Sands says. “We’re using a PacoJet as part of the process to teach students how to use new technology and machinery. You can create really good frozen ice cream instantly. It does what a blast freezer does with a spinning blade.”

The zabaglione (an Italian custard dessert) is plated using an iSi canister for espuma (foam). Other elements of the recipe introduce students to molecular gastronomy. “The mint sauce is made with xylitol, mineral water and mint leaves. The lemon powder has a five-day dehydration process and has to be powdered and strained before use,” President Sands explains. 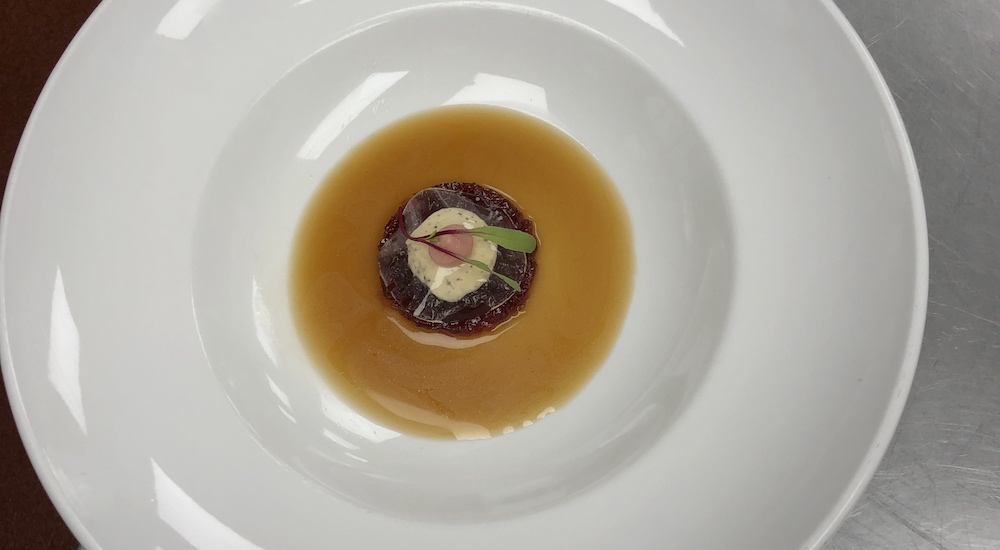 Whoever thought soup was simple is wrong. Soup can be complex as demonstrated with Dominique Crenn’s onion soup from three-Michelin-starred Atelier Crenn in San Francisco. “The dish has five very discreet components to the finished product,” President Sands explains. “Students have to create an onion broth, which takes a couple days, an onion marmalade and a gnocchi with comté cheese in it (which is soooo good!). There’s an onion puree that’s necessary and a veil over the top of it all, which is made of vinegar, agar and gelatin.” The lesson teaches students plating and presentation. “Chef Crenn does an amazing job of mixing traditional flavor profiles with traditional techniques and modern molecular gastronomy,” Chef Sands says.

“Local restaurant recipes do change relatively often, based on local trends,” President Sands says. One of these is demonstrated during the lesson focused on Southern California’s chefs, when students are taught a slow-roasted lamb neck from Bavel, chefs Ori Menashe and Genevieve Gergis’ Arts District restaurant. “This is a traditional style of braise, but the flavor profiles are very Middle Eastern, very Israeli, and these flavor profiles have been one of the big movements in the last few years in Los Angeles,” President Sands adds.

“We want to be sure students have a vast array of techniques at their fingertips,” President Sands says. “It gives them the palate for which they can communicate their art through.”

Pursue art on the plate with culinary career training at ICE.