Aviv On is studying Pastry & Baking Arts after earning dual diplomas in Culinary Arts and Restaurant & Culinary Management at the Institute of Culinary Education in Los Angeles.

Aviv On began working at his parents’ kosher catering business, Bazilikum (Hebrew for “basil”), during his senior year at Beverly Hills High School. At 17 years old, working in the kitchen was simply a means to an end, but today Aviv describes his culinary curiosity as bordering on "maniacal."

"I didn’t feel anything," he admits. "I just wanted to help my mom and make some pocket money after school." When Aviv opted not to attend college, his mother encouraged him to take a tour of ICE, which had recently opened a campus in Los Angeles. A month later, Aviv began classes, enrolling in the Culinary Arts and Restaurant & Culinary Management programs for a dual diploma.

His mother ignited a spark guiding him to ICE, and shortly after classes began, Aviv felt a fire begin to burn inside. He dove headfirst into foundational skills, from honing knife cuts to building stocks to making mother sauces. Culinary Arts Chef-Instructor Louis Eguaras was there to guide him along the way. "He did not just say to follow the recipes, he would give me his ideas, share his experience and explain how everything connects," Aviv says. For the last course, Aviv and his classmates focused on contemporary cuisine and plating theory. "We learned about negative space and how a little goes a long way," he recalls.

Then he studied the business side of the restaurant industry with an attention on front-of-house operations in Restaurant & Culinary Management classes three days a week. "I needed aspects of management and kitchen-wise to understand food costs," he says.

With the help of Career Services, he landed an externship at celebrated chef Josiah Citrin's restaurant Melisse, where Aviv's education continued. "I learned [under Chef Ken Takayama] that everything is intricate and everything has a reason to be," he says. "The neatness, the consistency ... it was the ‘everything has to be perfect’ approach."

After soaking up the nuances of a fine-dining restaurant and a stint at his aunt’s bakery, Aviv's ambition led him to New York City.

"I messaged Chef Meir Adoni on Instagram and told him he inspired me greatly, and I wanted to work for him at Nur," Aviv says. That gumption paid off, and the chef replied positively. Aviv bought a flight, packed his suitcase and headed east. His schedule at Nur was demanding, often 11-hour days, five days a week. "I didn’t mind, I was learning, learning, learning," he says. 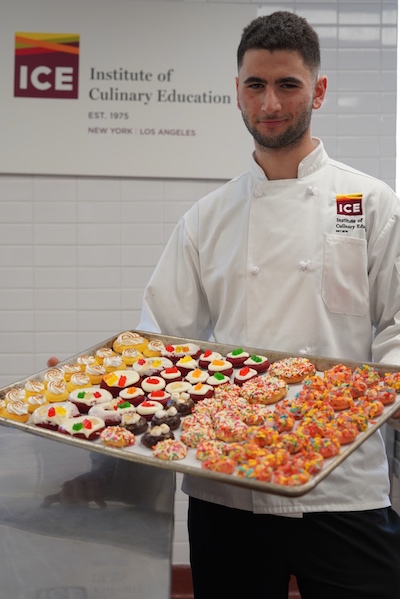 After more than seven months, he returned home to Los Angeles, and shortly after, COVID-19 hit. Aviv's plans to continue his in-restaurant education were thwarted. Luckily, his family’s food business was operational and Aviv returned to work for his parents — this time with more purpose.

When he wasn’t working in the catering kitchen, he was teaching himself new skills. "I would go on YouTube, read books and started just doing things. I couldn’t stop, I just had to," he says of honing his craft with pizzas, pastas, doughs and sauces. Aviv turned to the chefs at Bazilikum for guidance. "You have to want to learn and it doesn’t matter from who."

Eventually, when the city opened up again, Aviv landed a position in the bustling kitchen of Nobu Malibu, and he has since returned to ICE to study Pastry & Baking Arts, which will make him the first LA campus alum to complete three diploma programs.

"I wanted to study pastry because I needed to become more fully rounded," he shares after listing off the items prepared in his class that morning: croissants, danishes and doughnuts. Aviv’s excitement for pastry and baking is already evident.

"This pastry course has opened my mind," he says. "We learn when to add flour, salt, yeast ... it’s like a puzzle for every dough. Everything is different!" When comparing to the savory side of his education, he recognizes the distinctions. "It is much slower. You need a lot more patience, it’s beautiful."

His near-term plan is to complete the pastry program and return to a restaurant focused on modern gastronomy. "Contemporary cuisine is the thing that most interests me," he says. After that, he hopes to work and travel in Europe.

As for enrolling in a third program, the decision to return to ICE was an easy one. "The education has changed my mindset completely," he says. "The experience brought me confidence, movement, speed, consistency, and after Nur I felt like I could take over any kitchen. Culinary school was the fire before the wildfire."

When asked what advice he would share with others who might be contemplating the same path, he says, "It should be a big yes or a simple no. It should not be in the middle or else you won’t learn as much as you should. You need to be dedicated to this. You need to be maniacal about it. It did that for me, it enters inside you and starts filling you up with something. It’s passion, that’s the passion once you feel that you know you’re in the right place. And everyone finds their passion at a different time. I found it early. This is what I want to do for the rest of my life."

Pursue your passion at our Los Angeles campus.