You Say Cebiche, and I Say Ceviche: Peru’s Beloved Dish

Every April ICE publishes a new issue of The Main Course, our school newsletter and recreational course catalog. In addition to containing over 900 new recreational cooking classes, it always includes a great article about a burgeoning food trend with input from the industry experts at ICE. Here's part one. 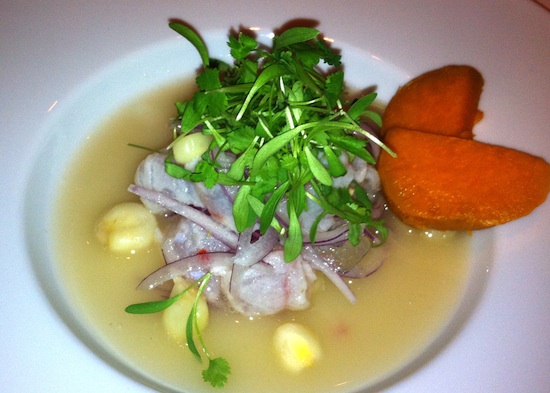 First up, the history of ceviche and the spread of the dish from Peru to New York City. Walk down any street in Lima and you are sure to come across ceviche — raw fish or seafood that has been ‘cooked’ in citrus juices. This popular food, also spelled seviche or cebiche, is Peru’s national dish and Latin America’s answer to sushi. Much like the sushi bars that dominate Tokyo, today there are over 2,000 cevicherias in Lima alone. Ceviche is native to Peru, but its origins are up for debate.

Some purport that ceviche dates back to the fourteenth century during the time of the Incas who had inhabited the land for hundreds of years. In this version, the Incans used available citrus fruits and salt in order to preserve their daily catch. However, according to Linda Civitello, author of Cuisine and Culture: A History of Food and People, it wasn’t untilthe Spanish conquistadorsarrived nearly two hundred years later thatthe dish wasborn. In 1532, Francisco Pizzaroand his troops arrived to conquerthe Americas.

From 1540 to 1550, theybrought foods from Spain and cultivated them in Peru’s soil. Grape vines, olive tree cuttings, figs, pomegranates, wheat, coconuts, and citrus fruits among other foods were planted. Yet a third belief is that ceviche came with a wave of Japanese immigration that began in 1899. Once in Peru, the Japanese adapted their traditional sashimi to include local ingredients and flavors. Today, the storied yet simple dish can be found on menus all over South America, on Mexico’s Pacific Coast, in the Yucatan Peninsula, on the islands of the Caribbean, up the Eastern seaboard and all the way to the concrete jungle that is New York City.

Like any other traditional dish, this one has been modified and modernized over time, but at its core, the process for making ceviche remains the same. While this ancient technique appears on dinner menus in the States, that is not the norm in Peru. Many cevicherias in Lima are not open for dinner as eating this type of fish and seafood is considered a daytime activity. This tradition came out of basic refrigeration issues from long ago when the fish would spoil by nightfall if not stored properly.

As such, Peruvians began to eat meat in the evening hours and that remains the customary practice. As chef Guillermo Pernot, formerly of Philadelphia’s Pasion!, said in his book Ceviche: Seafood, Salads, and Cocktails with a Latino Twist, “each dish must be made individually by assembling the components, seasoning them, and arranging them attractively for serving.” While this makes the dish a challenge for restaurants, the benefits outweigh the costs as it allows chefs a great deal of creativity not only in presentation but in the ability to experiment with a wide range of ingredients. Ceviche’s possibilities are limitless. Today’s modern chefs have made the dish their own by enhancing flavors by using methods and techniques such as cold smoking and brûlée-ing to adding another dimension of texture.

Probably the most famous is Peruvian-Chinese Chef Javier Wong who prepares inspired and innovative cuisine at his ten-seat Sankuay restaurant hidden inside his own home in the industrial district of Lima. There are no signs and no menus, rather the quirky chef looks you up and down, reads your face and decides which one of his fusion dishes you might like. At the eclectic East Village wine bar Desnuda, they merge global flavors and modern techniques. Their quick-seared scallops are marinated and served with Sriracha aioli while their Hamachi Tiradito (another common form of cured fish similar to Carpaccio) is teamed up with bee pollen. But no matter where or how it is prepared, every ceviche is best accompanied by a summery cocktail and preferably a Pisco Sour — a frothy blend of South American brandy, lime juice, simple syrup, egg whites and Angostura bitters.

The vehicle in which ceviche is presented is also open to interpretation. In Latin America, you’ll find the cured fish plated on everything from seashells to martini glasses, but the one constant — the ceviche should always be served ice cold. In Latin America, ceviches usually are scooped out with bread or tortilla chips, or a fork, but there is one instance in which it is guzzled from a glass. The Leche de Tigre (milk of the tiger) is a dish of the remaining marinade, which is traditionally served in a shot glass with chunky bits of fish and garnished with shrimp. In Peru, the legendary elixir is considered to be the best cure for a hangover.

Come back next week to see more about how ceviche is made and the science behind the dish.