Why Buy When You Can Forage For Free? One Chef Explains

Checking in With Chef Tom Coughlan

ICE alum Tom Coughlan (Culinary Arts/Culinary Management, 2012) is never not adding to his culinary repertoire. Just a few months after graduating from ICE, he started hosting pop-up dinners in Brooklyn, creating bold dishes using hyper-seasonal products, some of which he foraged himself. Raw mackerel with foraged pears and handmade pasta with foraged acorns were a couple of the crowd favorites. Since then, he’s competed on Chopped, worked for a number of high-end restaurants and spent a year as head chef of Brooklyn’s beloved Sunken Hundred.

Now he’s returned to hosting pop-ups, this time with a focus on using as many foraged ingredients as possible — from the New York region and sometimes even the city itself.

Tom’s part of a growing movement of chefs who choose foraged plants over store- or even market-bought — you’ve probably noticed an upswing of ramps, nettles and wild mushrooms on menus all over the country. But Tom takes it a step further, using obscure ingredients with short, near-impossible-to-catch seasonality: feral summer squash, wild Szechuan peppercorns and pineapple weed, to name a few.

Recently, we caught up with Tom to chat about his upcoming pop-ups, how he learned to forage and why cooking with wild ingredients inspires him to be more creative as a chef. 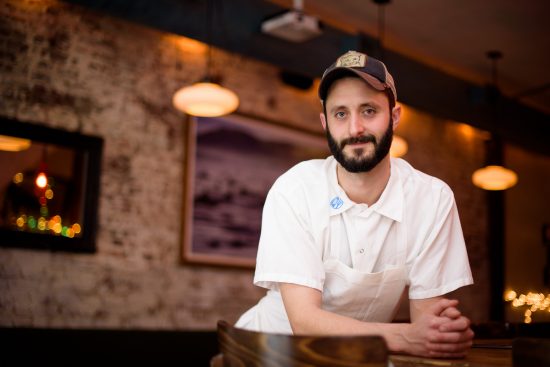 We interviewed you back in 2017. What have you been up to since then?

I’m just doing a little bit of everything. I started my own office catering brand and took some jobs as a private chef. I do private dinner parties and have been teaching classes at Cookspace in Brooklyn. I’m focusing on pop-ups dinners in the city and also starting to work on a cookbook.

Tell us about your pop-up dinners.

I try to do a pop-up at least once a month. My pop-ups are always forage-inspired. I would love to do a fully-foraged meal, but for now, there will be plenty of wild plants on the menu. My next one is June 21st at Branch Ofc. in Crown Heights. It’ll feature a lot of seasonal wild greens — like foraged mallow root that I’ll use to thicken a "wild green jelly."

How did you start foraging?

I’ve actually been trying to figure out what got me into it. I remember picking raspberries in the summer as a kid by my grandmother’s house. My grandmother would pick dandelions and eat them, and I think that’s when I started realizing that there was food all around me. In college, at Fordham University, I started noticing things growing in the city. When you grow up around a lot of green space, everything seems green — but when there’s concrete everywhere, you start to notice it more. I remember walking down the street in the Bronx and seeing lamb quarters growing along the sidewalk. That’s my first real memory of thinking about foraging.

What excites you about it?

I like going for a walk in the woods or in the park and coming across something new and thinking about what I could do with it. The flavor of wild plants is so unique, too. We’re all so used to the grocery store produce, the classic French cooking techniques and ingredients, and the flavors of a handful of herbs and spices. But there are thousands and thousands of edible plants around the world — so much opportunity to make something different.

Are there rules for when it’s okay to pick something?

I wouldn’t mess with national or city parks, or climb into people’s yards and yank fruit off their trees — but if it’s hanging off onto the sidewalk I consider it fair game. New York has a lot of invasive species — weeds that choke out the native plants. I think it would be great to teach people how to pick those weeds and make them taste delicious — it could be a great urban conservation effort.

Do you forage in New York City?

I have before [in the city]. It’s is a great place to learn about and identify plants, but I probably wouldn’t serve anything I find here — there are people and animals everywhere, and I also worry about herbicides. It’s amazing what you can find when you’re looking, though. In New York, you’ll  find a lot of runaways and rogue plants. I’ve seen corn growing, tomatoes, wild shiso, wild lemon balm; in my neighborhood I know of three peach trees, a pear tree, a persimmon tree and apple trees. Williamsburg is covered in fig trees, grape vines, acorns, black walnuts… once you start being aware of it, you can’t not see it.

It varies so much by season. That’s one of the most exciting things about it — the window for wild plants is so short. Some plants and flowers just bloom and then fall. You have to catch them within a day or two.

I get excited about things because of their rarity, too. One of the coolest plants I’ve found is called paper mulberry fruit — it’s like a bright orange gelatinous ball. The center of the fruit is hard and it grows slimy orange hairs. Once it hits the ground, it’s gone — you have to catch it at exactly the right time. It tastes artificially sweet, almost like an orange starburst. My other favorite is American persimmons; they’re nothing like the Asian persimmons that we know. It’s the size of a ping pong ball and it’s only edible once it’s fallen off the tree and begun to ferment. (Ed. Note: both of these come into season around late summer/early fall). In general, though, my favorites are the greens: dandelions, lamb’s quarters. Also a lot of the mushrooms that grow around here: hen of the woods, pheasant’s back.

Yeah, there’s some danger there, right?

There definitely is, but once you know, you know. If I find something I’ve never seen before I make sure I know what it is before I go further. Before I serve it to anyone, I always taste a little bit and wait a few hours before eating the rest of it.

You’re braver than I am. How did you learn to properly identify plants?

I learned almost entirely on Instagram. I follow a number of accounts for plant identification: @66squarefeet and @mallorylodonnel are both very active. I also follow @brandonbaltzley and @tmgastronaut — they post a lot of fermentation techniques as well.

So what can we expect to see on the menu for your upcoming pop-up?

I don’t know yet! That’s the fun of it. We’re in the best time of year right now; we’re finally out of the depths of winter and everything is green and growing. I’m excited to think outside the box and come up with something different. We’re often so stuck when we’re working in restaurants. If I have my own space for one night only, I can be more myself and share something unique and different. I may never cook that same thing again — it’s for that moment, in that space, in that time: it’s what I want to cook. I love that I get to do my own thing. I’m in full control.

Tom’s next pop-up is June 21st at Branch Ofc. in Crown Heights, 6pm-10pm. It will feature locally foraged ingredients. No reservations required.