Few things were as vital to the civilization of man as alcohol. 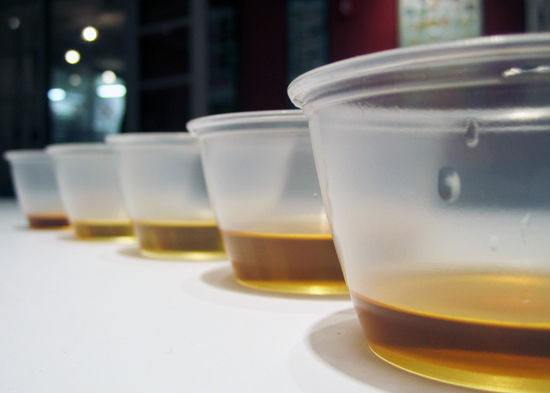 It seems like a bold statement, but without the sterilization capabilities, it provided, most freshwater sources would have been non-potable. This is the gravity with which Instructor Anthony Caporale approaches spirits — respect the drink, it saved civilization. Though he’s not one to discount the fun-factor involved in mixing, tasting and enjoying liquors either. In his Whisky, Bourbon, and Scotch class we focused on the tasting aspect, but also history and information about this beloved beverage.

Flavor Saver: Most liquors get their flavor characteristics from the oils of the distillation process, i.e. from the fruit, barrel, etc. Alcohol is, by nature, flavorless, so any flavoring it has comes from these congeners.

By Definition: Whiskey is officially any distilled beverage made from a cereal grain, and aged in oak casks. Different types have different requirements. For example, it used to be that scotch was required to be aged in barrels that held sherry, which is how cooking sherry came into being. They made poor quality sherry to season the barrels before making the scotch.

Beer Before liquor: Per the cereal grain requirement, all whiskey starts out as a form of beer before going through the distillation process to become liquor. Different types of grains dictate what kind of whisky it will be, i.e. scotch must be at least 51% barley, which grows in Scotland, while Kentucky bourbon must be at least 51% corn, rye whiskey must be 51% rye, etc. As Caporale says, every culture has their liquor, and it’s generally made from whatever grain they have a lot of.

Living Single: While it’s completely a matter of personal taste, there is an ongoing war between those who prefer single malt scotches to blended. Single malts are those that are taken from a single distillery, from a single distillation, from a single harvest, which makes it much more difficult to regulate the flavor, therefore a perfect batch is more valuable. Blended whiskeys provide much more consistent flavor as they mix and match from various batches to guarantee a specific flavor profile. To do this, they often buy the “reject” batches from various distilleries that specialize in single malts.

For Peat’s Sake: Peat moss is what’s used to heat the barely for malting in the whiskey making process. Peat is oil in a very premature state, and therefore burns very inefficient, which causes a lot of smoking, thus lending the distinct smoky flavor to whisky.

What’s in a Name?: There is continuous debate about which is the proper way to spell whisky (with or without an ‘e’). The general rule is whiskeys from the New World are with an e and from the old world are sans e. The lore is that the old school distillers were willing to share the how to with visitors so they could take it home, but told them it was spelled with an e so they’d be able to differentiate between the real thing and the imitators. While the Whiskeys, Bourbons and Scotches class focused on one specific type of spirit, Caporale took the time to educate us in the basics of alcohol creation, history, and management.

For more on that check out his upcoming classes for the spring on the ICErecreational page.