Identical twin sisters Lisa and Debbie Ganz once owned a one-of-a-kind restaurant staffed by identical twins. Now, they are owners of one of the leading casting companies in the country for reality television, Twins Talent. They’ve combined their skill for casting with their love of all things culinary as the senior casting producers of the hit shows "Hell’s Kitchen" and "Kitchen Nightmares," starring celebrity chef Gordon Ramsay. On Sept. 13, they will be hosting a demonstration at ICE to discuss their roles as casting directors and give guests a peak inside the world of reality TV (Update: This event will be rescheduled in 2011).

They’ll be bringing some of "Hell’s Kitchen’s" memorable contestants (including Kevin Cottle, Jason Santos, Van Hurd and Robert Hesse) with them to give a insider’s view of the shows. But before the event, we sat down with Lisa to learn some more about how she and her twin sister created the job they do today and their interesting and unique position in the food industry. 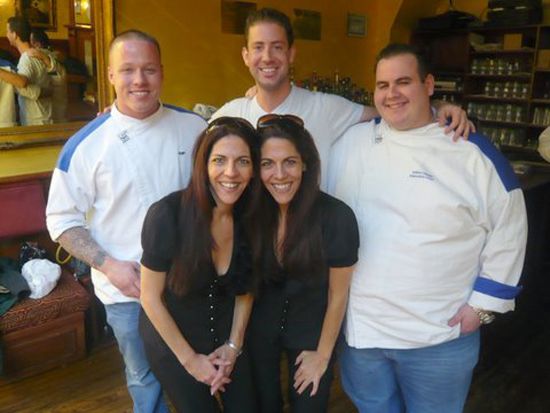 We are casting directors for unscripted reality television. We’re an integral part of selecting of contestants for both "Hell’s Kitchen" and "Kitchen Nightmares." While we cast all types of programming, our personal passion is the food and culinary area. As part of our business Twins Talent, we also specialize in casting twins, triplets, quadruplets, etc. for film, print, and commercials.

In the first grade, we had to write a few sentences about ourselves. I wrote that I would own a restaurant one day — even then I knew what I wanted to do. After we graduated from University of Albany, Debbie and I spent some time working in restaurants. Eventually, we decided that we knew the business and it was time to start working for ourselves. We had both had been gaining insight and knowledge into the complex world of restaurants, so we went for it. In 1994, we founded Twins Restaurant on the Upper East Side with actor Tom Berenger. We were the first restaurant in the world to be staffed entirely by identical twins — 37 sets to be exact. The twins always worked together — if one was sick, they both stayed home; if one was fired, they were both fired. They even dressed the same on their shifts. The only place we didn’t have twins was in the kitchen. We knew from our own experience that it was a bad idea to put twins together with knives in a stressful kitchen.

How did you move to casting?

When we owned the restaurant, we built up a huge database of twins so it was a natural move to start casting twins. Casting gave us a chance to combine our business knowhow with our love of people and food. Some people collect art, I collect foodies and people for a living. We had the passion for people, the gift of gab and the curiosity to find “star power.”

Can you describe a kitchen nightmare of your own?

Once, in the restaurant, a waitress spilled red wine on a customer. The customer was furious and started yelling and yelling the first chance she got. Only she was yelling at the wrong twin! It’s a tactic Debbie and I have since used. If we find ourselves in an unpleasant situation, we can just claim to be the other twin. As Debbie and I say, “You can only make a first impression once. We make it twice.”