I was wandering through the Columbus Circle Craft Market the other day. It’s another one of those ugly-hat-wind-chime-and-hand-crafted-jewelry markets that floods the city every holiday season. I usually walk through to get out of the chill — it’s at least ten degrees warmer inside the maze of stalls. On this particular day, my eye was drawn to a new vendor. 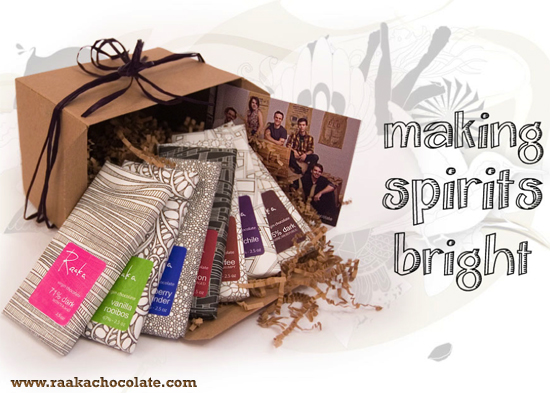 At first, I was confused, it looked a bit like Mast Brothers Chocolates, but on closer inspection, it was a place I had never seen before, Raaka Chocolates. Truth be told, I then remembered walking past the first day but being put off by the blueberry–lavender bar. The place kept haunting me though so a few days later I went to see what they were all about.

On first glance, it definitely looks as if they’re riding on the coattails of Mast Brothers, down to the brother’s hand-wrapped paper-covered bars. They wrap all their bars in beautiful “100% post-consumer recycled, chlorine-free processed paper that was made from wind-generated energy” and is designed with soy-based ink by Loop in Philadelphia. It’s really a lovely look and hey if it ain’t broke don’t fix it.

The chocolate itself is made in Clinton Hill, Brooklyn and it’s from ethical trade beans bought at a minimum of 17% above market rate. You might be surprised to know that the chocolate market is fraught with human rights violations and child trafficking.

There are some companies that support fair prices, wages and labor practices in their bean buying practices and that’s one of the things that is driving the price of chocolate up these days (but to be clear, none of that is justifying $1.19 for a regular-sized, partially-melted, Hershey’s bar at the Duane Reade). Then I was told they don’t roast their cocoa beans and they were vegan. WHOA!

I must say, that’s not something you hear in the everyday. In professional circles, when chocolate manufacturers are sitting around the water cooler, trading secrets of turning cocoa beans into the finest French and Swiss chocolates, unroasted vegan chocolate is unheard of. I think I said, “But this is still chocolate right?” I was skeptical, thinking blueberry-lavender and vegan seemed wrong but hooked into at least trying.

Upon tasting, I was quite impressed. I tried all the bars, except the blueberry (sorry, but there was just no way that was going down) and I really liked them. They all had the slightly grainy, dry mouthfeel that you seem to find in young chocolate companies but give them some time and I think they will figure it out. The flavors really were what it was all about.

My favorite was the Bourbon Cask–Aged. The beans may not be roasted but they’re aged in bourbon casks, much like some of my favorite maple syrup, and the flavor was amazing: chocolate and bourbon, clear-as-day delicious. I also really liked the Black Coffee and the Dark with Salt. I did try the Vanilla –Rooibos and while it wasn’t something that I would typically enjoy, it was their mildest and sweetest bar and I could see lots of people liking it. They don’t have a storefront but their bars are at the market and lots of small stores around the city, and they will be in Whole Foods soon, I just hope they don’t place them too close to the Mast Brothers bars. So give them a try, you just might like it.