The hot days of summer are finally upon us. 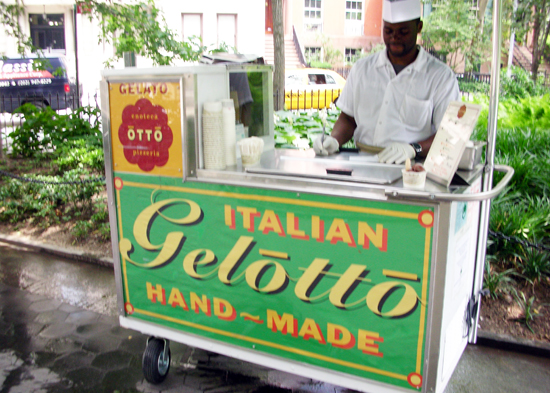 It’s so hot and humid that there are only two good things to do: swim and eat ice cream. I guess I should make that three things; I can’t forget Chick-fil-A. Yes, Florida, you have a special place in my heart because once a year I get to stuff myself silly with as much Chick-fil-A and Dairy Queen as I can stand. That’s right, living here in NYC where everything is at our fingertips, I find myself deprived. Apparently we do have a Chick fil-A at NYU. So I decided to venture downtown and see if I couldn’t get a head start on my vacation. Well, guess what — they were closed for summer. Drat! Needing to assuage my sadness, I figured ice cream was in order. Having no Dairy Queen in sight, I figured I would check out this new “French” gelato shop just a few blocks north. Does that not strike you as strange? French? Gelato?

Well, I was open-minded. Amorino just recently opened their first American store here in NYC. They have forty-two stores in France and a few others throughout Europe. Their specialty is scooping the gelato into petals, turning a cone into a beautiful flower. I asked how many flavors they could get on the different sized cones and was told as many as I wanted on any size. Reasonably priced for the high-end ($5.50 for a small) they scooped my choices into about 8 petals. I bought into the novelty completely. It was really cool looking — a stunning flower of ice cream on a quality cone. You couldn’t help but smile. As for the gelato itself, it was fine but not special and certainly could not compete with some of the fine artisanal ice creams. I sampled salted caramel, stracciatella (milk gelato with chocolate chips), cioccolato amorino and tiramisu. Except for the chocolate, they all tasted of flavorings and the texture was not especially rich and creamy. Still a definite stop if you are in the neighborhood, but maybe not a road trip. 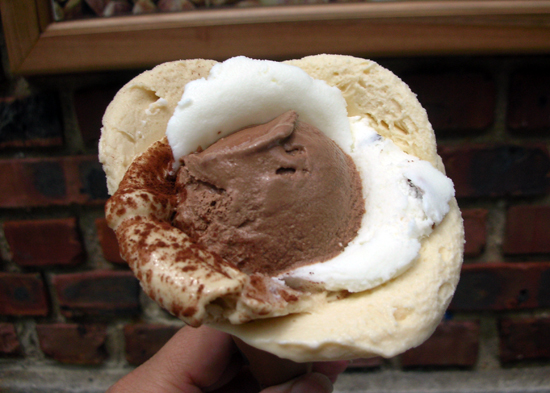 It was a lovely day so I didn’t see how I could possibly pass up the comparison to the Otto gelato cart over at Washington Square Park. It was definitely pricier — one scoop was $5 and two scoops were $8. I don’t think the double scoop here was any larger than the small at Amorino. However, the caramel tasted like handmade caramel and the chocolate was dark, deep and lovely. If I had to be particular, I would note that the cart stores the gelato at quite a cold temperature, and gelato is should be softer than hard ice cream, an important part of its charm. 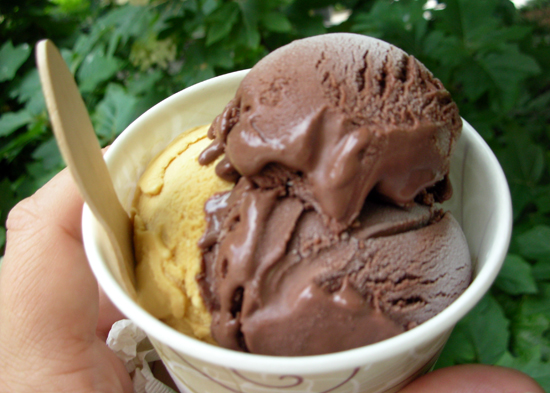 Returning back to the mothership in midtown, I figured I would give it one more last go at Grom, my usual haunt for gelato in New York. I wanted to have an accurate, state-of-mind comparison, so a small cone of crema di grom (milk gelato with chocolate chips and cornmeal biscuits) and tiramisu were in order. That’s right, I ate all that ice cream for you — a true sacrifice. It was a clear winner; I am a devoted fan of Grom. Although I may have to take a second mortgage to afford a cone, it’s truly worth it. The flavors are clear and true and the texture is soft and creamy without a hint of iciness or bite to it. We only go as a special treat (don’t want to drain the college fund) but it wins for me every time. (Unless Baskin-Robbins brings World Class Chocolate. Then we might have to have a throw down.)