A Sugar Showpiece for the Super Bowl

Whether for a competition, special event or mere display, I have constructed many sugar showpieces over the years. These pieces have been inspired by countless themes, ranging from country music songs to classic American novels. As a big football fan, the most exciting to date is the showpiece I created this past weekend for the Taste of the NFL in Brooklyn.

After discussing the theme and the feel of the event with my colleagues at ICE, it was time for me to begin the well-rehearsed design process. This starts with a simple sketch of the piece. In this instance, the design was somewhat difficult for me because it required one large sculpture and two smaller side pieces.

Further, the piece had to feature both the ICE logo and the Taste of the NFL logo. Ultimately, I decided to design the showpiece in the image of the Lombardi trophy. The next step in this process is to create a Styrofoam model of the pieces. This allows you to see all the parts of the piece three-dimensionally. Further, it lets you add color to the piece, helping you decide upon your color scheme.

Unfortunately, because of time constraints, I skipped the luxury of this step. I felt comfortable doing this because the piece itself already had a three-dimensional representation off of which I planned to base the color scheme: the silver of the Super Bowl trophy and the red, white and blue of the NFL. Additionally, the structure of the focal piece was a based on tried-and-true techniques that I had used many times before.

Skipping the model, I moved on to the next step: drawing out the shapes to scale. After creating these mechanical drawings, I placed them under clear vinyl and used both silicone "noodles" and caramel bars to form the molds of the shapes themselves. After casting all the necessary pieces to form the base, I began making, rolling and cutting out pastillage, which is used in the sugar of the main structure and to form the buildings on the logo pieces.

Lucky for me, the talented Chef Kathryn Gordon agreed to help me create the other necessary garnishes—including ribbons, curls and bubble sugar—that I would eventually need to finish the piece once it was created. The last step was molding the football itself, which would ultimately serve as the major focal point of the piece. To create the most realistic representation possible, I ended up purchasing a cheap rubber football and casting sugar into it. After allowing the sugar to solidify inside, I cut away the ball's rubber. The result was excellent! The only issue was the heaviness of the piece—about as heavy as a cinder block of pure sugar! To remedy this, I spent a couple of hours hollowing out the ball by slowly melting the sugar inside with a blow torch and pouring off the liquid.

With all the necessary pieces packaged and sandwiched between plastic wrap and sheet pans, I loaded them as carefully as possible into my jeep. Then, the slow, nerve-wracking trip to Brooklyn began. I could not believe the condition of our city's roads; it felt like we hit every pothole between 23rd street and Red Hook! By some small miracle, my pastry assistant—student Amanda Rondeau—and I made it to the event with all the pieces intact. When we arrived, we unloaded the various parts and our equipment with the help of the Taste of the NFL event staff. We then began to assemble the piece in its totality. This went well for the most part and was only complicated by the glaring halogen lights and the occasional gawkers.

After several hours, Amanda and I had fully assembled the showpiece—just in time to clear the room for the bomb-sniffing dogs to sweep through. While waiting outside, Amanda, Chef James Briscione and I passed the time by cracking nervous jokes about the dogs breaking the piece. To our relief, the showpiece was still standing when we cleared security and returned to our booth. However, as I got closer, I noticed some of the more delicate garnishes had fallen off and shattered on the table.

Looking around in confusion, I noticed a Port Authority police officer and his dog quickly approaching. When he reached me, he extended his hand and apologized. I responded that losing a few garnishes was a small price to pay for a bomb-free event, and told him not to worry about it. After all, it's important to keep your priorities straight. 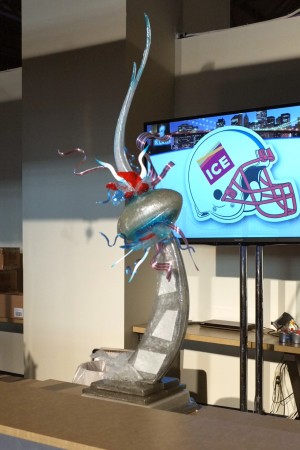 Overall, it was an absolute pleasure creating a sugar showpiece for the Taste of the NFL. As I said at the beginning—it's my favorite sugar creation yet!