I’m a big advocate of supporting relatively small, entrepreneurial, and spirited non-profit groups that, in their own way, make the world a better place. One such charity is Hoi An, Vietnam–based STREETS International.

I’m a big advocate of supporting relatively small, entrepreneurial, and spirited non-profit groups that, in their own way, make the world a better place. One such charity is Hoi An, Vietnam–based STREETS International, founded in 2007 by Neal Bermas, a former ICECulinary Management Instructor, and Sondra Stewart. STREETS held its annual fundraiser at Astor Center on Thursday, March 29th.

And I was lucky enough to attend with a group from ICE. The event included a walk-around tasting with modern street food, a chef cooking competition (for which I was a judge) and a short film about STREETS. Restaurants that participated in the street food tasting included Red Rooster, Morimoto, Bua, Rosa Mexicano, August, Blue Smoke and more.

The competition was a ten-minute contest between two lively chefs vying for the honor of being the chef who made the tastiest and most creative summer roll. The contestants were Chef Tim Love from Lonesome Dove in Ft. Worth, Texas, and Chef Daniel Holzman, co-founder of the celebrated Meatball Shop here in New York City.

Each chef was given a different mystery basket of ingredients. Chef Love’s basket contained rib eye steak, while Chef Holzman was given shrimp and, in a somewhat devious move, Chef Boyardee meatballs. With ABC reporter Lauren Glassberg providing live commentary, both chefs worked feverishly to nab victory and bragging rights. At one point, Chef Love tried to bribe me (publicly), but I implored him to instead give the money to the charity.

In the end, Chef Love won fair and square. The judges, Blue Smoke’s Mark Maynard Parisi, Southgate’s Chef Kerry Heffernan and I, voted for his rib eye steak, mayo and cilantro summer rolls. Now, if Chef Holzman had been able to use his own meatballs, things may have turned out differently. Thanks go out to restaurant PR pro Phil Baltz for putting this event within an event together. 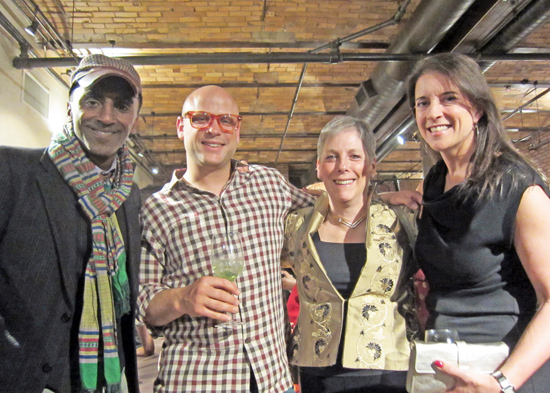 As for the organization, this past year I accepted Neal’s request to become a board member of STREETS. I am happy to have first-hand knowledge of STREETS’ operation because, in early 2010, my son and I visited Hoi An. Neal, along with his partner Sondra, have set-up an 18-month training program for 18 to 21–year-old orphans, street kids, and other disadvantaged youth to prepare them for lifelong careers in Vietnam’s growing hospitality sector. STREETS has set up a boys dorm house, a girls dorm house, a training and classroom center and a full-service restaurant to deliver a complete training, which includes proficiency in English.

With a new class of students starting every six months, STREETS is experiencing notable success. First, 100% of the STREETS graduates have gotten jobs in top hotels or restaurants after graduation. Second, their restaurant, Streets Café, is now rated #1 on Trip Advisor out of 128 restaurants in Hoi An! And of course, having a successful restaurant is a great way for this non-profit, philanthropic venture to become more self-sustaining.

To find out more, go to www.streetsinternational.org.