Starting Behind, Now Leading the Pack

Many people believe that to find success in the food industry, you need to start working in kitchens by the age of 18. At ICE, we’ve helped students from the ages of 17 to 70 discover their road to culinary success. Among those graduates is Culinary Arts alum Paras Shah, the executive chef at Kat & Theo in New York City’s Flatiron District. 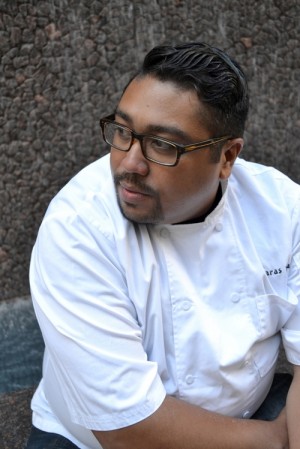 Already noted by such publications as Eater, The Infatuation and Grub Street, Kat & Theo is slated to be one of the most exciting new restaurants of 2016. Before he was racking up mentions in the press, Paras was a restless 29-year-old, unhappy in his sales job and craving a change.

When he saw one of his colleagues let go from the company, it sparked the motivation he needed to make his move. “I thought if there’s a chance for me to be laid off in this career I don’t even like, why not proactively pursue a career I would love? Which, for me, the dream was always to own a restaurant.”

By 30, Paras had enrolled at ICE and discovered his first culinary mentor in Chef Chris Gesualdi. As Thomas Keller’s longtime "right-hand man" and the former Executive Chef at the James Beard Award-nominated Montrachet, Chef Chris exemplifies the attention to detail and professional determination that it takes to cut it in the industry’s finest restaurants.

Paras notes, “Chef Chris is an example of a real chef. He takes no flack and understands the value of old school hard work. He always wants to better himself, and I can’t see anybody ever impacting me more than Chef Chris. I can’t thank him enough for all he has done for me.”

Noting Paras’ talent, Chef Chris pushed him to work at the highest levels. “In the final module of the ICE program, he would push me to work even harder, saying, ‘There’s no complaining at Per Se,’” says Paras. “Once I got to my externship at Per Se—with the help of a recommendation from Chef Chris—it all clicked, and I understood exactly what he meant.”

At Per Se, Paras found a wealth of opportunities. “Within my first couple hours in the restaurant, I learned what it was to be humble. Here I was at 30 years old, and there were younger kids in the kitchen cooking circles around me. I knew to succeed I would need to step it up, and part of that was breaking down walls within myself—pushing myself physically, mentally and emotionally.”

Among the highlights of his time at the restaurant was his relationship with Chef Jonathan Benno. “There was no room on the line at Per Se, but after my externship, Jonathan called David Chang and got me a position at Noodle Bar. That was before the Momofuku group had blown up—it was just on the verge of becoming an empire.” Chef Chang also proved a perfect foil to Thomas Keller.

“Where Per Se taught me technique, standards of excellence and precision, at Noodle Bar I learned to taste, to use my senses as a cook. Often, there were no recipes! I would be told, ‘Take these ingredients, and make them taste like that.’ I had to develop my palate and start to understand what the food was trying to be.”

During his second year at Noodle Bar, Paras began preparing an application for the ICEX Spanish Trade Commission scholarship. An award for young chefs, scholarship recipients are given the opportunity to spend 14 months in Spain, working at some of the country’s best restaurants. “When I was applying,” Paras explains, “it said that special attention would be given to chefs under the age of 27 who had at least five years of experience in kitchens. Neither of those guidelines applied to me, and yet, I still won. It taught me that if there’s something you want, you have to go for it.”

Over the course of his time in Spain, Paras worked at many diverse restaurants, from The Hotel Santo Mauro in Madrid to El Bulli, to Echaurren, an acclaimed, family-run restaurant in a rural corner of La Rioja. In particular, Echaurren’s Chef Francis Paniego influenced Paras’ understanding of innovation through his creative take on traditional riojano cuisine.

“The people who are the biggest innovators have a strong hold on the past. You need to know the traditions, be proud of your heritage and then expand upon those ideas. You can’t be afraid of putting your spin on a dish, but you also can’t forget the importance of old school technique.”

El Bulli was an incredible machine of precision, repetition and discipline for Paras. Chef Ferran Adrià was an incredibly collaborative chef, sharing his questions and challenges with his entire team of chefs and pushing them to come up with creative solutions. “The coolest thing about Ferran was that he wasn’t satisfied with throwing chemicals into something just to make it look cool. He wanted to show the inherent worth of each ingredient and treated an orange with just as much respect as foie gras. He was constantly in pursuit of the simplest, most elegant solution.”

Upon returning to New York City, Paras sought out Chef Josh DeChellis at Manhattan’s La Fonda del Sol to continue his pursuit of Spanish cuisine, working his way up to executive sous chef. In 2014, Paras toured the country with Dinner Lab, an innovative pop-up dinner collaborative that pulls from a wide range of international cuisines. Shortly after Paras started at Dinner Lab, Chef Josh reached out with an enticing offer.

The owners of Kat & Theo were looking for an executive chef to complement their vision for a Mediterranean restaurant. Just 24 hours after preparing a tasting for the restaurant’s team, Paras was offered the job. “Working at Kat & Theo has been a crazy experience. It’s my first time working the opening of a restaurant—and it’s my restaurant. So I’ve tackled a lot of general manager tasks that I’d never tried before—cash flow, employee management and official inspections from the department of health.

My experience in business has helped a lot.” Paras has advice for other career changers eager to get into the food industry: “Stay humble and listen without judging. You’re there to learn and increase your skill set, and even if something doesn’t make sense immediately, there’s probably a reason your chef wants it done a certain way. But also, have fun. The only reason to work in this industry is for the love of what we do, and if people don’t taste that love on the plate, that would be a terrible result.”

How to Make a Charcuterie Board