Every year, Chef-Instructor Kathryn Gordon travels with a group of ICE alumni to the Loire Valley in France for the Alumni Cuisine Course in France.

Last week, Chef Kathryn shared some of her experiences on this year’s trip. This week, she tells us more about the markets and shops that let the students explore the best of springtime in France. 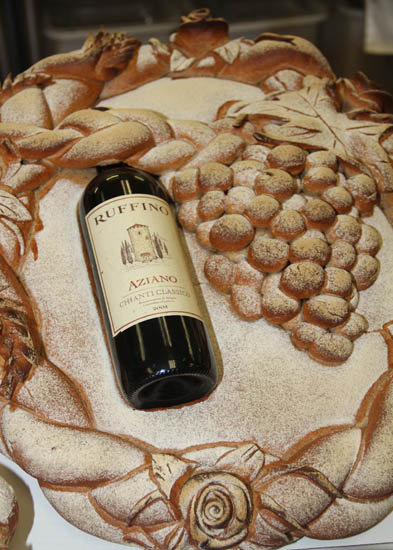 I’ve visited the Loire Valley at various times of the year, and I love the spring. The season promises delicious meals with fresh, local ingredients like carrots, radishes, berries, rhubarb, young lamb, and sorrel. At Le Moulin Bregeon, there were five baby geese swimming around in the river each day and ten baby turkeys born this year. And spring is also time for baby goats at The Mill. Le Moulin Bregeon is located in the “Garden of France,” which produces much of the agricultural products for Paris and we spotted some of the flat-bottom boats that were traditionally used to transport produce and wines up and down the Loire River. The weather in May is usually beautiful and this is the first year we’ve ever had rain. Since it’s a little hard to walk around markets and broquants (flea markets) in the rain, we had a day of caves.

The Saumur region of Anjou is full of caves, with over 1,000 km of caves in the city alone. Originally, residents moved into the natural limestone caves when the area was invaded by the Vikings, Arabs, and English over the centuries. The tufa stone was later carved out extensively for the region’s châteaux. These caves are now used in the production of food. About half of the region is devoted to mushroom production and the other half to sparkling wine fermentation (the region is the second largest wine producing region in France). We visited the wine caves of Langlois-Château for a tour and tasting, mushroom production caves, and even a cave where pommes tapées (dried apples) are produced. The dehydrated apples are cooked in red wine with cinnamon and cloves and taste delicious. The caves are all a constant 55ºF year-round, so it was quite chilly.

In another cave, we saw beautiful oyster mushrooms. Did you know that if you pick your own mushrooms in France, you can go to any pharmacist for a free mushroom identification to make sure they are edible?We always visit master cheesemaker Hughes Delahaye in his free-range organic chevre farm. In the region, it is rare to be producing milk from goats that spend their days out in fields. And his cheese tastes like it. There’s a very distinctive taste to his goat milk and range of cheeses. We also did a dairy tasting of raw cow milk, goat cheese of variable ages from 24 hours to 3 months, and sheep yogurt and butter. In addition to exploring food production in the area, we had the chance to discover dining in the region. We ate with Chef Pascal Favre d’Anne at his restaurant Favre d’Anne in Angers. It was incredible to sample his work.

For example, our first course was a crispy langoustine rolled in pâte à bric on a mushroom-truffle salad with boudin blanc ice cream that had been made in a PacoJet. We also made a visit to La Forterie, an artisan foie gras farm that opened in Linieres-Bouton. It’s fascinating to see how precise the farmers are in preparing the feed. Corn prepared as a warm porridge that is cooked for exactly one hour will yield a foie gras lobe between 500 and 600 grams. If the birds are fed uncooked corn, the foie gras will weigh less and if the corn is cooked too much, the foie gras will be too fatty. As always, the trip was incredible. I can’t wait for next year!

For a full itinerary on the 2013 ICE Cuisine Course, please check out the itinerary or email Chef Kathryn at kathrynlmg@yahoo.com. The trip is open to all ICE alumni as well as those from the general public who appreciates food, cooking and wine! In 2013, we’re going to stay a ninth night (the trip is scheduled to depart on April 30 and go through May 10). For more info on Le Moulin Bregeon, check out their Facebook page and website. To see more about the bios of the chefs, check out Chef Kathryn’s trip website. You can see more about what Chef Kathryn is up to on her website.