As the director of special projects at Union Square Events, the catering and venue hospitality division of Danny Meyer’s celebrated Union Square Hospitality Group, ICE alum Omri Green is working at the pinnacle of the food and beverage industry. 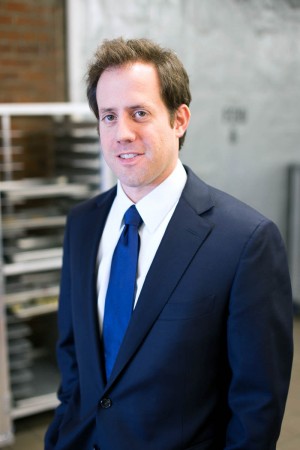 “It’s crazy to think I’m entering year 13 with this company,” says Omri. “Without a doubt, I wouldn’t be where I am today without that fundamental background [I received at ICE] in both Culinary Arts and Culinary Management.” Yet working in the food industry wasn’t always Omri’s professional goal.

Upon graduating from the University of Wisconsin in 1997, Omri worked on New York City film sets, eventually in a full-time position at Miramax Films. There he gained extensive experience in business affairs and post-production until he realized that furthering his career in film would require a move to the West Coast. “I’m a born and raised East Coaster, and I wanted to have a career that would keep me closer to home. So I decided to explore something that was always a passion for me: the culinary industry.” Omri enrolled in ICE’s double diploma program in Culinary Arts and Culinary Management, where he quickly found mentors in Chef Ted Siegel and Management Instructor Brian Buckley. He also found himself inspired by the guest lecturers who visited his management classes, notably Mark Maynard-Parisi, who was then overseeing the launch of Blue Smoke Catering at Danny Meyer’s famed barbecue outpost.

Upon graduation, Omri took a position as a host/reservationist at Blue Smoke while learning the catering trade. After about a year, he moved to catering full time. After three years managing Blue Smoke Catering, Omri received an offer to work with Hudson Yards Catering, a company within the USHG family. Two years later, he became the operations manager for Hudson Yards Catering (now Union Square Events), overseeing all catering operations for the company. As the business expanded rapidly, it became clear that there was a need for support of new business—someone to help handle the development of long-term ventures and consulting opportunities. That person was Omri.

It’s incredible to think that someone could have these varied experiences under the guise of a single restaurant group—especially in an industry that is known for diversified resumes and high turnover rates. Yet Omri notes that “USHG is different from other big companies out there. It’s like working for family. They really take good care of you, and working for a larger operation offers the benefit of a centralized backbone for operations, from legal to marketing, IT and more.” (For those interested in positions at Union Square Events, click here to see a list of opportunities.) Today, we’re thrilled to have Omri back at ICE as a new instructor in our Culinary Management program. In fact, he’s currently co-teaching with his early mentor, Brian Buckley, and is eager to inspire the next generation. “I love starting with folks who don’t have a lot of business knowledge and teaching them the essentials. I remember what it was like being at ICE and not knowing what was in store for my career. What’s more, as a career-changer, I know what it’s like to switch industries and work your way back up, so I think I have a lot to share.”

Ready to follow in Omri's footsteps? Click here to learn about the double diploma program at ICE.