There’s a lot more to Spain than running bulls and a World Cup title.

Most notably: paella. While the promise of mastering this crowd-friendly dinner was my initial attraction to ICE’s Spanish Surf-n-Turf recreational class, I learned much more than just the wonders of a well-made paella! For example, the evening was the beginning of what is sure to be a life-long love affair with piquillo peppers (it also helped that our recipe called to stuff them with my absolute favorite ingredient on earth, goat cheese). Here’s some more of what I learned in the class: 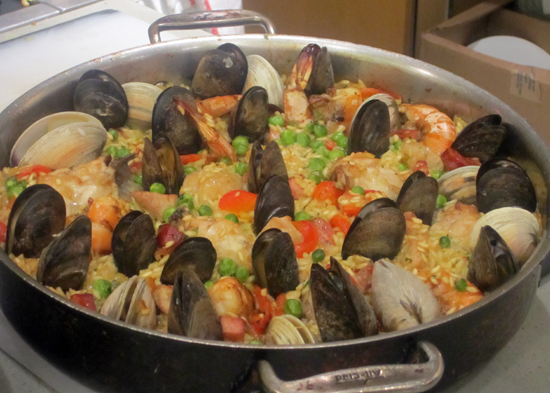 Tapas!: Originating in the 19th century in the south of Spain, tapa, which has locally become code for “upscale bar food” literally means “lid.” Tapas originated on the coast of Spain, where insects can ruin an outdoor dinner. Small plates were used to cover your cocktail in an effort to protect it from the bugs and dust.

Not the Other Way Around: One of the foods we made was Gambas al Ajillo or “shrimp sautéed in garlic.” Chef Daniel Rosati made a special point to remind us that you’re not using the shrimp solely as a catalyst for garlic consumption (which is a common mistake). To ensure the garlic doesn’t steal the show, it should be sliced rather than minced. This allows for a more subtle, though still identifiable, flavor.

Original’s Not Always Best: The paella that’s known and loved the world over, dense with chorizo and shellfish, is a far cry from its in-land origins. The first paellas were made with the short-grain rice and the protein came from the snails and rabbits one came across in the rice fields.

More Crocus for Us!: A popular ingredient in many Spanish dishes is also one of the most expensive spices in the world — saffron. Derived from the a crocus, the spice is the stigma of the flower which is hand-picked and dried. Saffron was also used in the 14th century to dye all Papal garments, giving the red garments a distinct golden glow. Don’t be fooled by “Mexican Saffron” which is really just crushed marigold petals — these provide the color, but not the flavor of real saffron.

We topped off our extensive menu with a couple batches of sangria (one red, one white). So while I have a long way to go before I can play futbol like a Spaniard, at least now I can host a team dinner!

Would you like to master the art of making paella? Check out the recreational classes coming up at ICE!