While I enjoy a glass of wine as much as the next gal, my forays into wine pairing have been a struggle to say the least. 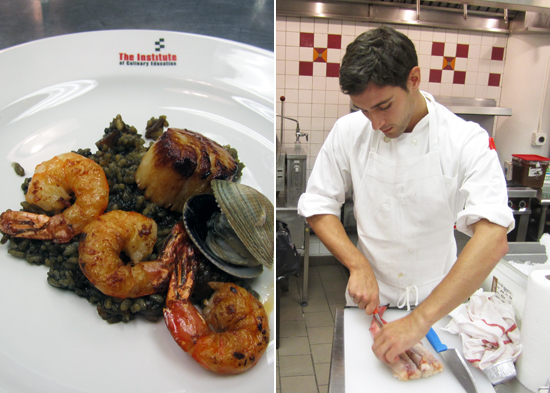 I can appreciate the distinctions when given three pinot grigios in a row and coached by an instructor to pick out the nuances and flavors that match certain foods. But when I actually have a dish in front of me and no expert to help me, I’m generally at a loss. Luckily, ICE’s Spanish Food and Wine Pairing class came to the rescue. ICE alumni and current Chef de Cuisine at the celebrated Spanish restaurant Casa Mono, Anthony Sasso led us through six courses of distinctly Spanish dishes.

As each dish was served the restaurant’s Assistant Sommelier Juan Holgado introduced us to the six wines that best-paired with each (These represent a mere one-hundredth of the options available in the Casa Mono cellar, which boasts the largest assortment of Spanish wines in the America). The amount of information I learned about both the foods and wines of Spain over the course of the four-hour class couldn’t possibly be contained in one blog post, but here are some of the highlights:

Onomatopoeia: Pil pil, a traditional Spanish sauce, is actually named in reference to the sound of the fish hitting the hot oil. Surprisingly, there is no other thickening agent that goes into making the signature sauce, it’s just olive oil from frying the fish, and a little elbow grease that make-up this distinct gravy-like dish. Chef Sasso claims that when you see an old Spanish man pushing a pan back-and-forth-and-back-and forth over a flame, this is probably what he’s making. 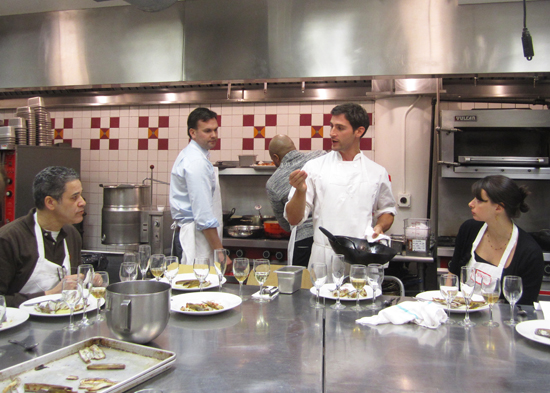 HandsOff!: Probably the most widely-recognized Spanish dish is paella, often noted for the specific pan used to prepare it. According to Sasso, the reason this wide, shallow pot is necessary has to do with the starchiness of the rice. Like arborio rice that’s used in risottos, paella rice has two layers of starch. If you mess with it too much you’re going to get a gelatinous glob rather than the ideal individual grains. The design of the shallow paella dish allows the rice to cook evenly with little to no stirring.

Better than Bermuda: While Spanish law dictates that all wines designated as Sherry must come from the Sherry Triangle region of the country. The range of flavor profiles produced in this limited area is astounding. This can be attributed to many things, one of which is the process of making Sherry. The mechanics behind it includes complex barrel systems where wines are layered one-over-another for years on end. This mixing of vintages means that, unlike other wines, the date on the bottle is the year that barrel system started rather than the specific vintage of the grape. Though I doubt I’d be employable as a sommelier any time soon, I certainly got a great overview of the incredible variety of flavors Spain has to offer, both to eat and drink. Saúde!