In late October, I ventured to Memphis and Mississippi to celebrate, learn and enjoy the rich mix of food, drink, cooking history and music that emanates from that part of America. The trip was timed so I could attend the Southern Foodways Alliance’s (SFA’s) annual symposium in Oxford, Miss. Here is some field reporting from the four days.

I arrived in Memphis in time for dinner and of course wanted BBQ. Memphis has a number of notable BBQ choices such as Cozy Corner and Central BBQ, but they tend to be closed at night or a ways from downtown. The famous exception is The Rendezvous.  Opened in 1948 by diner owner Charles Vergos, The Rendezvous serves southern BBQ with a Greek influence. I enjoyed their famous charcoal-grilled Dry Pork Ribs, which are brilliantly seasoned with paprika, oregano and cumin.  Notably, given the Vergos family heritage, The Rendezvous is a rare BBQ house where you can get a great Greek Salad.

Friday I drove from Memphis to Greenwood, Miss., and stopped at Elvis Presley's home, Graceland, on the way. It’s a fascinating, fun, 12-acre property. The interior design includes brilliant period (60’s and 70’s) touches like a 15-foot sofa in the living room, a media room with three TV’s built in side by side, a basement bar room with carpeted ceiling and an avocado colored sink in the kitchen. Other rooms and buildings contain things like most of Elvis’s gold albums, a wide range of stage suits and his 1956 Pink Cadillac. I did not learn much about Elvis’s culinary leanings, but I will share the news that apparently Elvis liked peanut butter and banana sandwiches, and so do I. The SFA Symposium pre-trip was in Greenwood, Miss. Once a thriving center for the Delta cotton trade, Greenwood would now be a shell of a town was it not for the fact that it is the home of the Viking Range Corporation. Viking, lead by Fred Carl, has been a wonderful community steward, providing jobs, revitalizing buildings and drawing attention to this archetype southern town. If you visit, you will want to stay in the Alluvian Hotel, a six year-old Main Street development, which now makes lists as one of the nation’s “finest boutique hotels.” Thursday evening began at Turn Row Books in Greenwood. After a snack of cheddar and ham biscuits, chicken liver pate and tea, we heard a casual but scholarly talk about Craig Claiborne. Claiborne was Food Editor of the New York Times from 1957 to 1986. He was a pioneer and VIP in America’s modern food revolution. And like William Faulkner, Elvis Presley, Muddy Waters and BB King, Claiborne was raised in Northern Mississippi. Claiborne’s earliest culinary education came from the kitchen of the boarding house his parents ran in the 1930’s in Indianola, Miss. 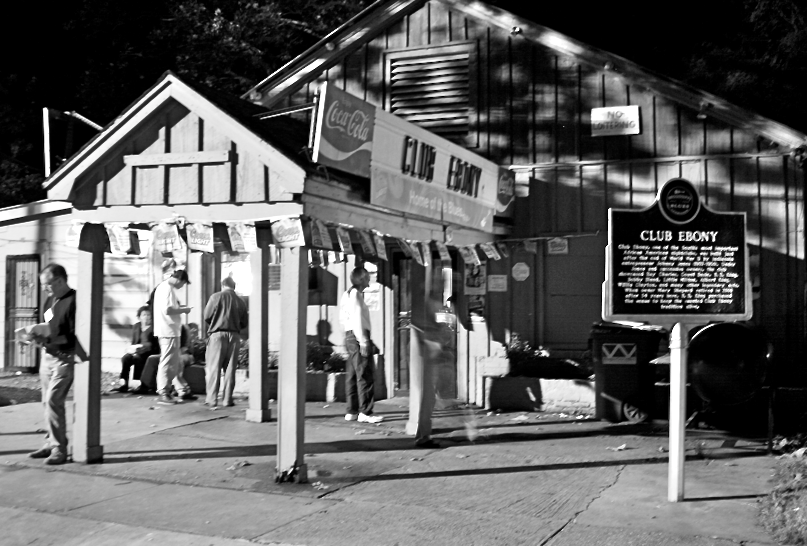 From there we went on to the new BB King museum in Indianola and then to Club Ebony, one of the areas more famous – and still operating – “Juke Joints.” Our guide for the evening was Mississippi-based professor/writer/Blues expert, Scott Barretta. Dinner included chitlins, chicken wings, potato salad and because it was Thursday night, a local fried fish called “buffalo fish.” Chitlins are pork intestines. Boiled, stewed or fried, chitlins are one of those foods that you either love or hate. My photos of chitlins did not look very good, and well, I cannot say that they’d be served on any possible “dream menu” that I would create.  (Though in Turkey, they have a rotisserie grilled version of chitlins, popular as a street food, that was good for a few bites.) Greenwood’s three most famous restaurants are Luscos, Giardina’s and The Crystal Grill.  I went to the first two six years ago, both of which hail from the historical 1890-1910 influx of Italians to the American south.

This trip, I found time for lunch at The Crystal Grill. It exceeded my already high expectations for a classic southern plate luncheon. I began with a cup of seafood gumbo -the best I’ve ever had. Then the main plate was breaded fried veal cutlet with brown gravy, yams and homemade turnip greens. After that I did not have room for the bread pudding with rum sauce, or Crystal’s regionally famous pies - Lemon Meringue and Chocolate Cream. The manager told me that about once a day, some culinary tourist like me comes in and takes pictures of their food. The locals, who have been eating there all their lives, observe this practice with a mix of curiosity and pride.

Unfortunately, in Greenwood and the surrounding area, the big talk is about the weather.  It has been an unusually rainy autumn in the region and the moisture has stunted the late growth of crops and created poor conditions for what should be harvest season. Those crops are predominately cotton and soybeans with rice, hay, wheat, corn, sweet potatoes and pecans making up the rest of the state’s major agriculture. Later that day, I passed cotton and crop fields, driving to Oxford, home of Ole’ Miss University, and the main site for the SFA Symposium.