While growing up in Michigan, my understanding of authentic Southern cooking was anything that came out of the KFC drive-thru. After taking ICE’s classSouthern Comfort: American Regional Favorites, I was pleased to learn the Mashed Potato Bowl, with its popcorn chicken, corn kernels, and shredded cheese, is not at all traditional southern food. 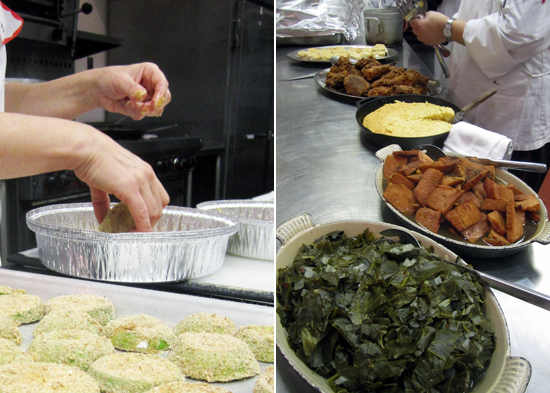 Chef Instructor Dan Stone set the record straight, leading a recreational cooking class where we cooked traditional Deviled Eggs, Buttermilk Biscuits with Sausage Cream Gravy and Fried Fruit Pies, all while sipping Sweet Tea and Mint Juleps. I left the class not only stuffed full of Fried Chicken and Braised Collard Greens but with some gastronomical history of the South’s most iconic dishes.

Bread — in a skillet? Baking cornbread in a hot, well-seasoned, cast-iron skillet helps achieve a nice crisp and golden crust that you can’t get using any old baking dish. We slipped the skillets into the oven while it was preheating to get them warm and then poured the batter in once they were piping hot.

Why put Coke in a cake? During World War II the government rationed sugar and other common ingredients. To boost the morale of troops, Coca-Cola, which was not affected by the sugar rationing, was mass bottled and shipped to combat areas in Europe in the Pacific, along with military bases in the US. A clever baker realized that the beverage could replace some of the sugar in a chocolate cake.

Barbecued ribs with no grill? Most Americans refer to barbecuing as grilling, but in the South, barbecue actually means meat cooked low-and-slow with indirect heat to create juicy, falling-off-the-bone meat.

Gravy with eyes? Red Eye Gravy is a thin sauce made of pan-fried meat drippings mixed with black coffee. According to folk legend, one morning former President Andrew Jackson asked his hung-over cook, who had been drinking moonshine the night before, to fix him some country ham and gravy as red as his eyes. Sound finger-looking good? There’s another Southern Comfort: American Regional Favorites cooking class on the ICE calendar April 29th and it’s your opportunity to get a great lesson, and meal, on some of the most celebrated cuisine in America!