Sous-Vide Cooking in the Kitchens at ICE

The Main Course is the much-loved newsletter of ICE. Published three times a year, every issue contains the upcoming schedule as well as interviews, articles, profiles, and recipes. In the Winter 2012 issue, former ICE Director of Center for Food Media Anne E. McBride took an in-depth look at the developments in sous-vide and how the Chef Instructors at ICE are integrating it into our career training programs and kitchens. We’re sharing the article here on DICED. 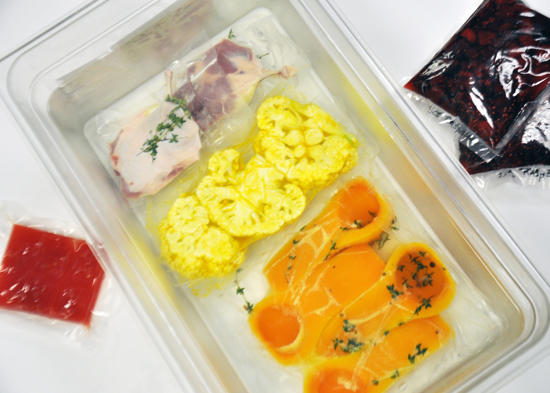 Long the domain of a few select chefs, sous-vide cooking is now making itself at home in kitchens around the country—those of professionals and home cooks alike, thanks in no small part to the proliferation of appliances allowing for the process. The teaching kitchens of the Institute of Culinary Education are no exception. “The goal of using sous-vide systems is to capture food at its peak and preserve it at that state,” explained Chef-Instructor James Briscione. “Chicken, for example, is at its best the day it comes in the door; the sooner it is cooked or processed, the lower the risk of spoilage or decline in quality.”

Sous-vide, which means “under vacuum” but more accurately refers to the absence of air in the cooking process, was first developed in the 1970s in France. Three parts are essential to sous-vide cooking: the absence of air; temperature; and time. Removing the air is typically done by vacuuming it out. Temperature refers to that of the water in which the bag is immersed once sealed, below simmering.

Time is less critical in sous-vide than in traditional cooking since food that reaches the desired temperature will never go above it, no matter how long it stays in the water. That said, spending too long in a water bath can affect the texture of certain ingredients. The apparatus most commonly associated with sous-vide cooking is a temperature-controlled water bath.

Professionals typically use an external thermal circulator clipped to a pot or container; that circulator is inside the countertop sous-vide appliances for home cooks, which have become more widely available since the release of the SousVide Supreme in 2010. Whether in plain sight or not, that technology ensures that the water circulates and is kept at a constant temperature.

Before going into the water bath, meat, seafood, vegetables, or fruits are placed inside a heat-resistant plastic bag with a liquid, herbs, or fats to add flavor. In most applications, the air is then removed from the bag and the sealed bag is placed in a heating environment (a water bath, steamer, or combi oven, for example), in which it will cook at a constant temperature for a given period of time. Varying temperature by just two to three degrees Celsius can result in widely differing results.

Once the air is removed from the bag and it is sealed, the pressure inside the bag is the same as the pressure outside the bag (atmospheric pressure). The food is thus not technically under vacuum (or under pressure, as sous-vide is often erroneously translated). The absence of air allows the even transfer of heat to the foods that are in the bag, which gives them the same texture through and through, from surface to center.

When textural contrasts are desired, such as with meat, which doesn’t offer the best sensory effect when completely soft, the food can be quickly deep-fried or sautéed, which will give it a thin crust. Famed French chefs Pierre and Jean Troisgros, the chef-owners of Troisgros in Roanne, France, began collaborating with chef Georges Pralus in 1974, looking to reduce food waste and retain aromas by cooking foods at low temperature in multilayer, heat-resistant plastic bags. Their early experiments were with foie gras; thanks to those, Pralus is often called the father of sous-vide cooking.

Another Frenchman was a pioneer as well: Bruno Goussault, a scientist, was also working on sous-vide equipment and technique developments, but for more industrial applications. Today, as chief scientist of the Virginia-based company Cuisine Solutions, he consults with companies large and small and trains chefs from corporations and independent restaurants on optimum uses of the technology.

ICE has been working with the Italian company Orved to develop a sous-vide education program, explained Briscione. In summer 2011, he and Chef-Instructor Chris Gesualdi traveled to Orved’s headquarters to be trained. Briscione will be teaching a class for ICE career students and alumni in the spring, using a newly received Orved water bath. “This water bath, just the first or second such model in the US, has three built-in hypodermic probe thermometers,” he explained. “This integrated technology allows you to cook three different pieces of meat to different temperatures without having to set up three separate baths, and, more importantly, not having to buy three circulators! Best of all, equipment like this allows us, here at ICE, to become more proficient in sous vide cooking.”