With the debate on the salt ban raging, New Yorkers are paying a little more attention to that shakable sodium. Here at ICE, eleven of us gathered to Savor the Salt in a recreational class with Chef Renee Marton.

We learned salt is not all bad. In fact, salt is vital to our existence! So don’t cut it all out just yet. After an extensive taste-test of a wide variety of salts from various regions, each team got the chance to cook Moroccan Chicken with Preserved Lemons, Spiced-Salt Rubbed Rib Eye Steak (hands down the best steak I’ve ever had) and, my personal favorite to make, Whole Red Snapper Baked in a Salt Crust. We divided the rest of the menu, my team (the duo behind Always Hungry) making a Carmel Ice Cream, which was delicious alone but to die for when topped off with flaked pink Australian sea salt! Chef Marton is also a food historian so the class learned not only about salt’s place in our lives today, but how it’s influenced our lives and cultures for centuries. Here are some savory lessons learned: 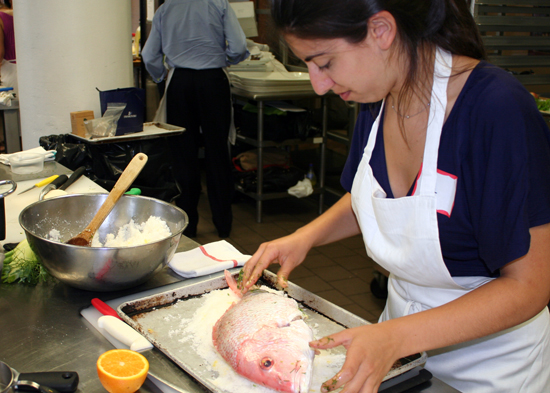 Salt was once so valuable that Roman soldiers used to be paid in salt. In fact, that’s where the term salary comes from!

When grinding spices, a mortar and pestle is a great gadget, but a coffee grinder usually does the same job much faster. Though you might want to get one you don’t use for coffee to prevent cardamom in your coffee mug!

When cooking fish in a salt crust, it’s important to put a layer of moist cheesecloth between the fish and the salt. Not doing so can cause the salt to tear away hunks of fish when it is removed. There are millions of uses for salt in every facet of cooking and baking. Salt is a flavor onto itself, not just seasoning for what you’ve already cooked! So savor the salt however you use it!