When ICE Chef Instructor Chris Gesualdi isn’t busy teaching in ICE’s Culinary Arts Career Program, he can be found crafting recipes and experimenting with molecular gastronomy in any of ICE’s kitchens.

I was fortunate to document the process of Chef Chris’s latest creation, salami from scratch. “The key is to keep all of your grinding equipment in the freezer, where it’s covered, clean and cold,” said Chef Chris as he sliced through a spicy soppressata. The salami was one of six different types Chef Chris made during his most recent round of recipe testing. His recipes included everything from red wine and garlic to white pepper and cayenne, and the process is one that requires following a strict timeline over a 30-day time span. 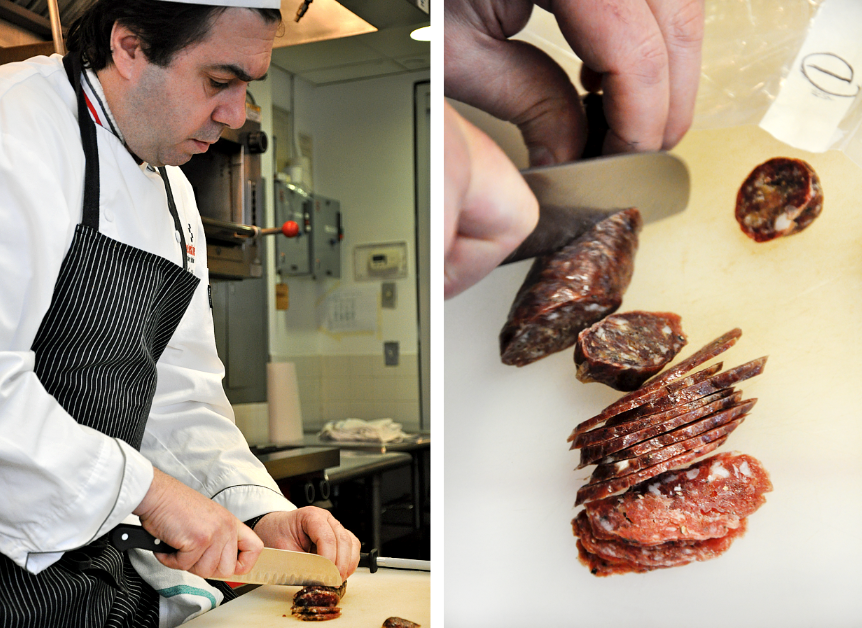 “On day one you have to weigh out the fat and the protein,” said Chef Chris. “Then you add all of the salts, sugars, spices and finally, the live culture.” The live culture is the catalyst that controls the rotting time of the meat, ensuring a slow and steady spoiling over weeks, rather than days. After a nightlong marinade, Chef Chris then grinds and stuffs the mixtures into one of two types of casings, natural of synthetic. “Natural casings can be either hog’s intestines or beef middles,” he said. “After you stuff them you just have to decide on the size and then tie each portion off with kitchen string.”

As simple as Chef Chris makes it sound, there’s actually a lot more science behind a successful salami than just stuffing and tying. “You have to keep absolutely everything on ice from day one,” said Chef Chris. “Then [on day two] you have to hang them in a basement where the temperature is between 40-60°F and there’s 60 percent humidity.” The prime temperature conditions allow the meat to age at the perfect speed, and hanging the links allows them to mature evenly because all sides are equally exposed to air. Four weeks after marinating marks the earliest point at which the salami can be ready to slice and “hopefully serve,” said Chef Chris. Larger salamis can take up to three months to age to the perfect degree, a characteristic that is defined solely by the firmness of the final salami.

“You have to be incredibly careful that you get all of the air out of the casings after you stuff them,” said Chef Chris. “Otherwise you spend all that time aging the salami and it rots.” Chef Chris’s selection of salamis were enjoyed by ICE employees at this week's tasting. They were first met by a round of applause and then by silence, as each of us took time to study the flavor and texture of slice after slice of homemade salami. We paired spicy sopressata with hearty grain mustard and slightly smoky Genoa with salty Parmesan. From celeriac foam to experiments with Xanthan gum, I’ve always looked forward to Chef Chris’s gastronomical creations and this week’s salami showdown didn’t disappoint.